Joe Judge and his coaching staff are taking the blame for the New York Giants' winless start.

Judge, defensive coordinator Pat Graham and offensive counterpart Jason Garrett pointed the finger at themselves or their groups as a whole when asked about the Giants (0-3) problems and shortcomings in September.

While some players could have been criticized by name, the coaches refrained Thursday before practicing for Sunday's game in Los Angeles against the Rams (2-1). 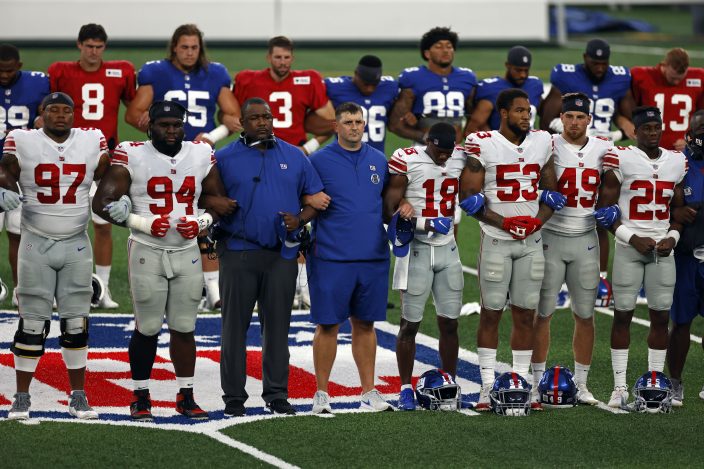 FILE - New York Giants head coach Joe Judge, center, stands with arms linked with his players to make a social injustice statement prior to their scrimmage at the NFL football team's training camp in East Rutherford, N.J., Friday, Aug. 28, 2020. The Giants will kick off the Joe Judge era against the Pittsburgh Steelers on Monday night, Sept. 14. (AP PhotoAdam Hunge, File)

Judge said coaches have to be self-critical. He said when he sees a player make a mistake in a game, he wonders what could he have done to avoid the error.

Judge said he asks those questions every day, noting most coaches do it.

“If you’re someone who wants to simply look at players and say ‘well, he has to play better. He has to do this.’ What did you do to put him in that position?" Judge said.

“To me, for our staff, we have to be a group of guys that watch the tape and we see ourselves in the performance of the players, and we have to make sure we’re doing everything possible to help elevate their level of play.”

Graham's defense was unable to get off the field against the 49ers last week. They scored seven times, missed a 55-yard field goal after a snap-hold problem and had the game end on their last series.

Like Judge, Graham took the hit rather than throwing anyone under the bus.

Second-year defensive tackle Dexter Lawrence said the blame should be spread around when asked about Graham shouldering it.

“We’re all in it together. It shows the kind of person he is, taking it for the team,” Lawrence said. “But in my eyes, it’s on all of us. We just need to have that attitude that we’re getting off no matter what. That’s just how we have to approach every third down.”

The offense has struggled all season, scoring 38 points. The run game, even before Saquon Barkley tore up his knee, has been non-existent. Quarterback Daniel Jones has six turnovers. The receivers are not creating a lot of separation and there have been very few big plays.

“We just need to play better across the board offensively,” Garrett said. “Obviously, we’ve faced some good defenses in Pittsburgh, Chicago and San Francisco, so great respect for them. But we haven’t done anything well enough up to this point.”

Veteran tackle Cam Fleming, who was signed in the offseason to help the O-line, believes the mood in the locker room remains good.

“We know we have to work harder and do better to pull out some of these wins,” he said. “I don’t think anything is going to get us down. I think we’re together as a team and we’re just ready to go out there and work some more.”