San Diego’s powerful offense finally burst to life after slumbering through a 7-4 loss in Game 1 and a listless first five innings Thursday night.

Tatis and Myers are the second teammates in postseason history with multiple homers in the same game, joining Babe Ruth and Lou Gehrig of the New York Yankees in Game 3 of the 1932 World Series — including Ruth's famed “called shot.” 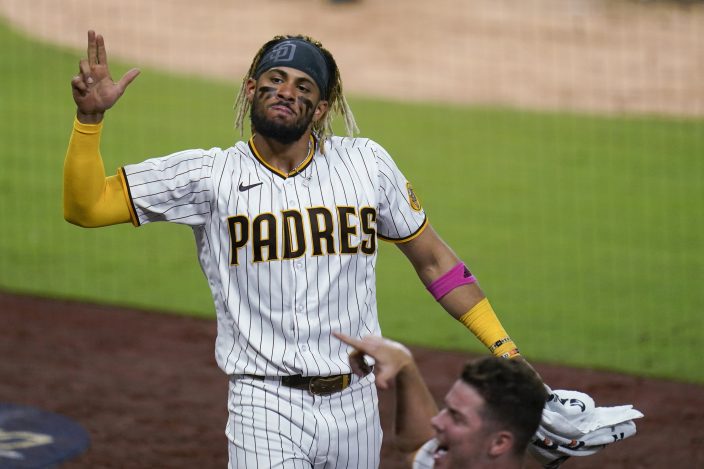 San Diego Padres shortstop Fernando Tatis Jr. gestures next to a teammate after a home run by Wil Myers during the seventh inning of Game 2 of the team's National League wild-card baseball series against the St. Louis Cardinals, Thursday, Oct. 1, 2020, in San Diego. (AP PhotoGregory Bull)

The Padres are the first team in postseason history with five home runs from the sixth inning onward in a game.

Tatis, a 21-year-old budding superstar and NL MVP contender along with Machado, had a breakout game after struggling for much of the final two weeks of the regular season and with runners on base in this series.

After striking out with the bases loaded in the fourth, Tatis homered in consecutive innings and drove in five runs. Tatis’ father played for the Cardinals for three seasons during his 11-season big league career. 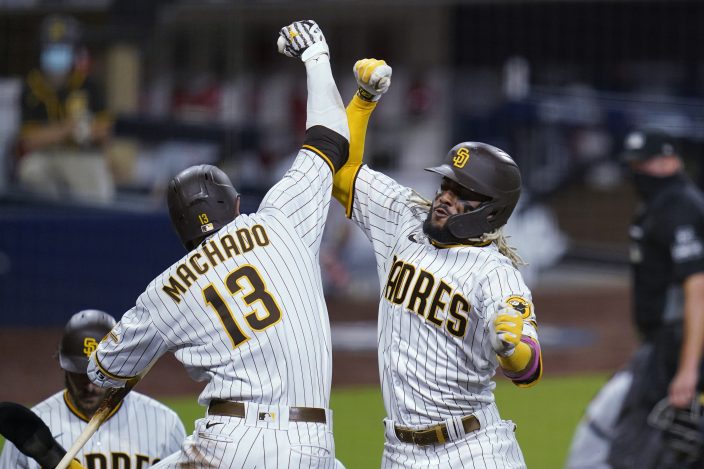 Myers hit a go-ahead leadoff shot in the seventh off losing pitcher Daniel Ponce de Leon and a two-run homer in the eighth.

It was the Padres’ first postseason win at Petco Park, which opened in 2004. The first four losses were to St. Louis, which eliminated the Padres in the division series in 2005 and 2006 — the last time the Padres made the postseason — as well as in 1996, when the Padres played at Jack Murphy Stadium.

Game 3 will be Friday, and both staffs figure to be strapped after the clubs combined to use 17 pitchers. 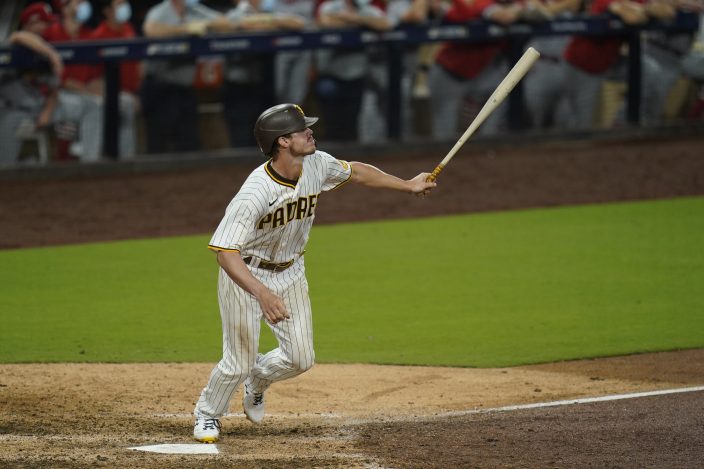 Tatis hit a three-run homer with two outs in the sixth and Machado followed with a tying shot.

It was the second time the Padres hit consecutive shots in the playoffs. The first was when Greg Vaughn and Tony Gwynn connected off San Diego native David Wells in the fifth inning of Game 1 of the 1998 World Series at Yankee Stadium. New York swept that series.

With Austin Nola aboard on a walk, Tatis hit a no-doubt, opposite field shot to right with two outs in the seventh. He flipped his bat aside, stared into the Padres’ dugout and gestured before starting his trot. 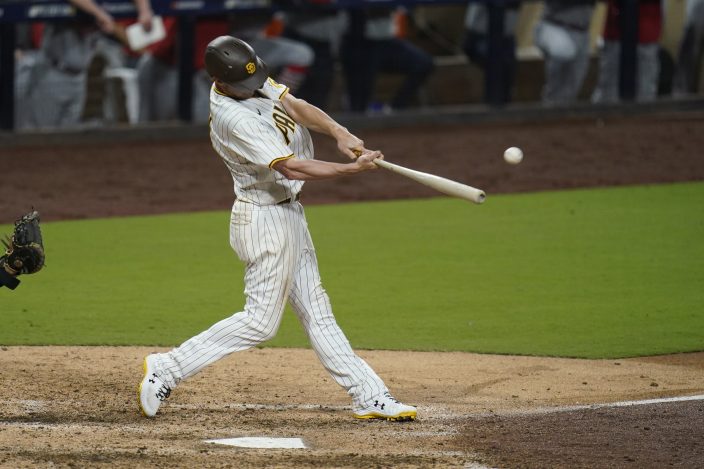 Genesis Cabrera opened the sixth by walking Nola and rookie Jake Cronenworth before striking out Trent Grisham and making way for Giovanny Gallegos. Tatis lined a 2-2 pitch into the left-field seats to pull the Padres to 6-5. Machado followed by lining a 3-2 pitch to left-center to tie it.

Tatis was second in the NL with 17 homers in the regular season, Machado had 16 and Myers 15.

Tatis, Machado and Myers were part of the “Slam Diego” run of four grand slams in four straight games, and five in six games, both firsts in baseball history. 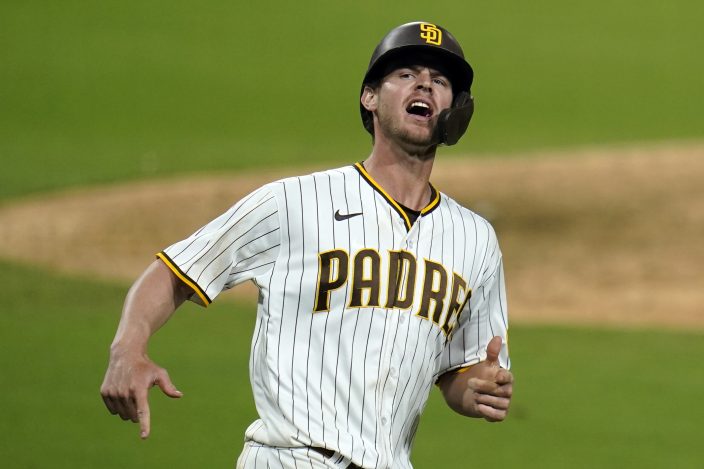 Emilio Pagán got the win and former Cardinals pitcher Trevor Rosenthal pitched the ninth for the save.

Kolten Wong homered and drove in four runs for the Cardinals, who led 6-2 in the sixth.

Cardinals starter Adam Wainwright allowed two runs and six hits before being chased after 3 1/3 innings. He struck out three and walked two.

Wong, who had just one homer in the regular season, gave the Cardinals a 4-0 lead with a no-doubt, two-run shot to deep right field off Zach Davies with one out in the second. It was fifth career postseason shot. Harrison Bader, who struck out five times Wednesday, was aboard on a single that scored Matt Carpenter after his leadoff double.

Yadier Molina, appearing in his NL-record 100th postseason game, hit an RBI single in the first and added his 100th career postseason hit in the ninth before being lifted for a pinch-runner.

Davies allowed four runs and five hits in two innings, struck out three and walked one.

The Cardinals scored two unearned runs in the eight, both on sacrifice flies, after Tatis committed a throwing error at shortstop. Paul Goldschmidt homered in the ninth, his second this series.