Australian golfer Lucas Herbert carded seven birdies and one bogey in a 6-under 65 to lead the Scottish Open by one shot on Friday going into the weekend.

Herbert contemplated quitting the game as he struggled during the middle of the 2019 season, but finds himself in contention for his second European Tour title after winning his first in January in Dubai.

At 11 under par, he’s a shot ahead of Robert Rock, and two ahead of two more Englishmen, Ian Poulter and overnight leader Lee Westwood. 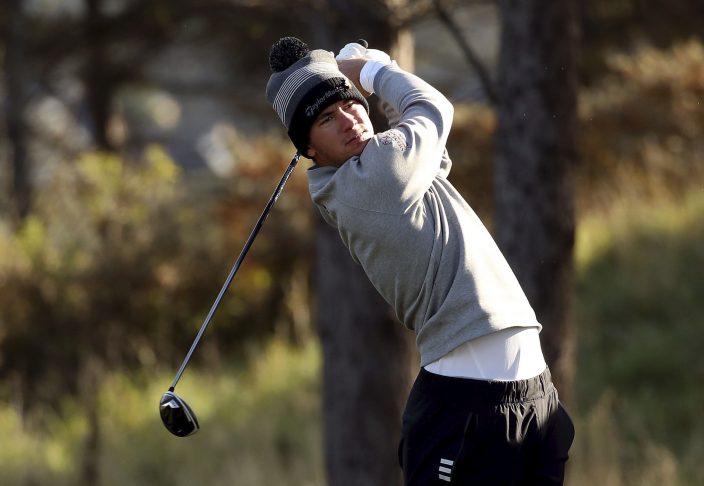 Australia's Lucas Herbert tees off on the eighteenth during the second round of the Scottish Open at The Renaissance Club, North Berwick, Scotland, Friday, Oct. 2, 2020. (Jane BarlowPA via AP)

"To be honest, I turned up here on Wednesday and hit it all over the place,” Herbert said.

"Sort of not really expecting too much the last few days, but it's kind of all come together nicely. My iron play has been great, which has taken the pressure off, and I haven't had to get it up and down from ball washers to try and save pars.”

Poulter added a second round of 66 to his opening 67 at the Renaissance Club for a halfway total of 9 under which was matched by playing partner Westwood. 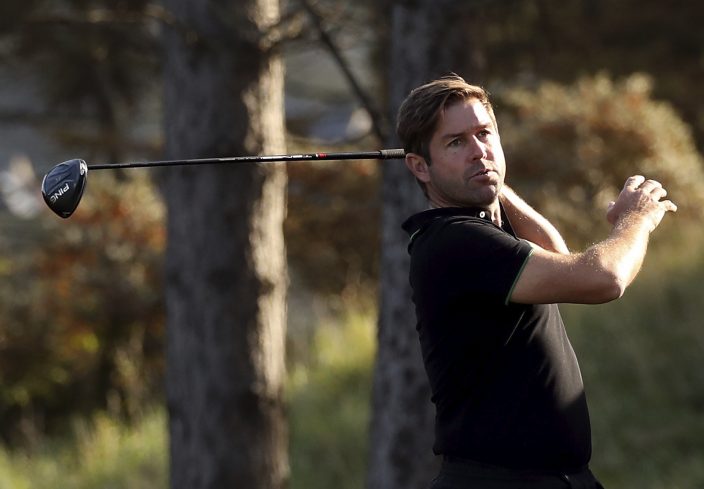 England's Robert Rock tees off on the eighteenth during the second round of the Scottish Open at The Renaissance Club, North Berwick, Scotland, Friday, Oct. 2, 2020. (Jane BarlowPA via AP)

Westwood could follow a brilliant 62 on Thursday with only a 71.

"It’' nice to be in contention and good to come back, play and support the tour,” the U.S.-based Poulter said.

"It's great that we have these events on right now, to be able to showcase the tour a bit and I'm not thinking anything about Saturday bar bringing an umbrella and a pair of waterproofs. 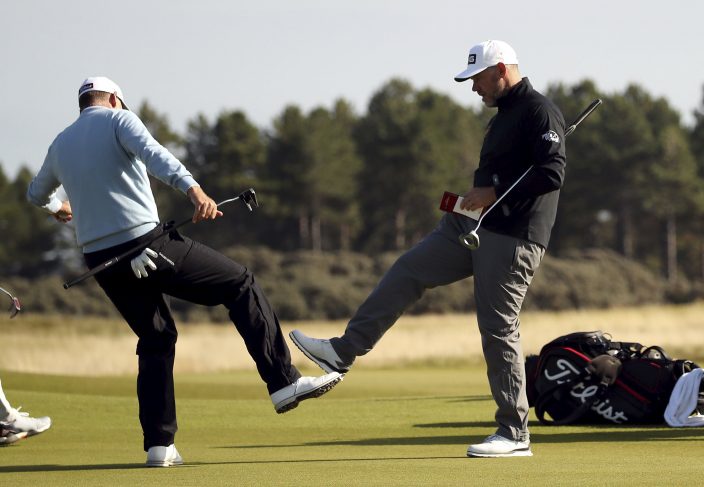 England's Lee Westwood, right, and Ian Poulter bump feet after they finish their rounds on the ninth green during the second round of the Scottish Open at The Renaissance Club, North Berwick, Scotland, Friday, Oct. 2, 2020. (Jane BarlowPA via AP)

"The weather forecast looks horrific, 20 mph (32 kph) winds and a couple of inches (5 centimeters) of rain. You can be blown off the course easily, but we’re at the right end of the leaderboard to try and batten down the hatches, dig in deep, and hold strong as much as you possibly can.”

Plans for 650 spectators to be allowed on site on the last two days have had to be abandoned following a strengthening of coronavirus restrictions.

Also missing will be Paul Lawrie, the 1999 British Open champion playing his 620th and final regular European Tour event. Hampered by back problems, Lawrie carded a 79 to finish 10 over par.