Craig Stammen and eight fellow relievers combined on a four-hitter in a brilliant, record-setting effort that sent the San Diego Padres over the St. Louis Cardinals 4-0 Friday night in the deciding Game 3 of their NL wild-card series.

The Padres won a postseason series for the first time in 22 years and advanced to face the NL West rival Los Angeles Dodgers in the division series at Arlington, Texas, starting Tuesday.

The nine pitchers marked the most used in a nine-inning shutout in any big league game since 1901. 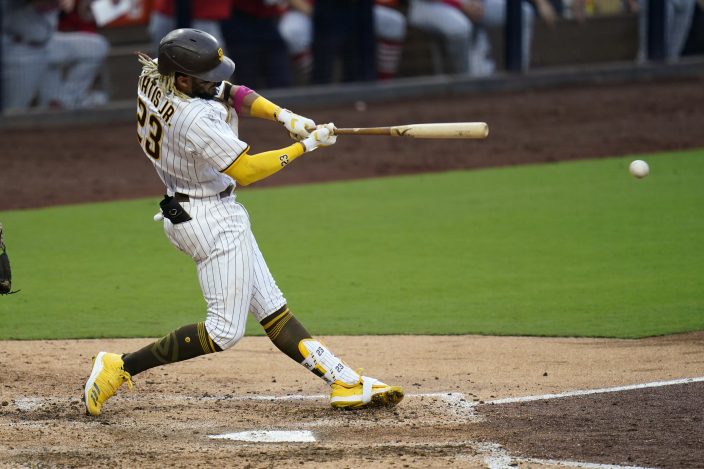 With starters Mike Clevinger and Dinelson Lamet unavailable due to injuries suffered in their final regular-season starts, rookie manager Jayce Tingler was forced to tap the Padres’ already-stressed bullpen and it came through magnificently. San Diego became the first team in baseball history to use eight or more pitchers in three straight postseason games.

Trevor Rosenthal, who started his career with the Cardinals, struck out the side in the ninth and the Padres began to celebrate in empty Petco Park.

It’s the first postseason series win for the Padres since they beat the Atlanta Braves in the 1998 NLCS and only the second time they’ve won a playoff game at Petco Park, which opened in 2004. The Padres lost to St. Louis in the division series in 2005 and 2006, the last time the Padres were in the postseason. The Cardinals also eliminated the Padres in 1996. 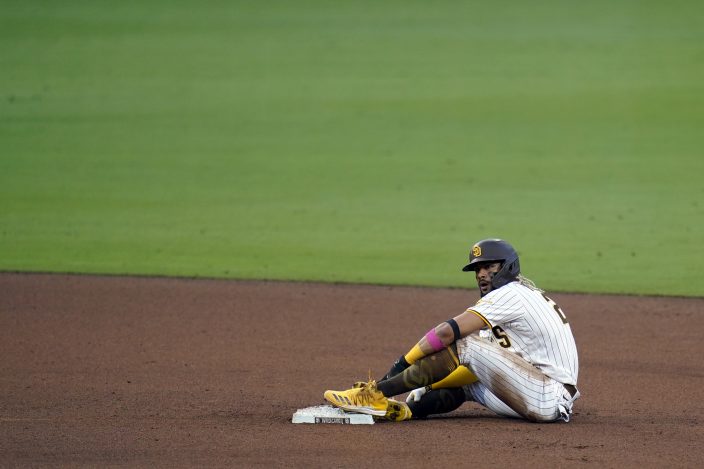 San Diego Padres' Fernando Tatis Jr. sits at second base, getting back in time after a popout by Manny Machado during the fifth inning of Game 3 of the team's National League wild-card baseball series against the St. Louis Cardinals, Friday, Oct. 2, 2020, in San Diego. (AP PhotoGregory Bull)

All four division series feature matchups between division rivals. All seven Central teams lost in the first round, with the Cardinals joining Cincinnati, the Chicago Cubs, Milwaukee, Cleveland, Chicago White Sox and Minnesota.

Fernando Tatis Jr., who homered twice and drove in five runs in Thursday night’s wild 11-9 victory, doubled into the left-field corner off losing pitcher Jack Flaherty with one out in the fifth and scored on Eric Hosmer’s two-out double to right-center.

The Padres added on against reliever Alex Reyes in the seventh, on a bases-loaded walk to Hosmer and Manny Machado's fielder's choice and an error on third baseman Tommy Edman. 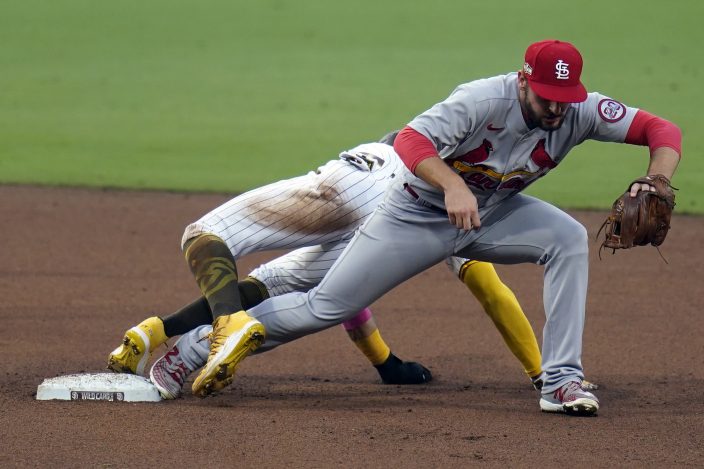 With spectators watching from balconies on buildings surrounding the outfield and on a big-screen TV in a nearby parking lot, the Padres rewarded their long-suffering fans by winning one of the most meaningful games of any kind in San Diego in a long time. The city’s only major professional championship remains the San Diego Chargers’ 1963 AFL title. The Chargers left for Los Angeles after the 2016 season, leaving the Padres as the only pro team in San Diego, which lost NBA teams to Houston and Los Angeles.

The Padres lost 4-1 to the Detroit Tigers in the 1984 World Series and were swept by the New York Yankees in the 1998 Fall Classic. 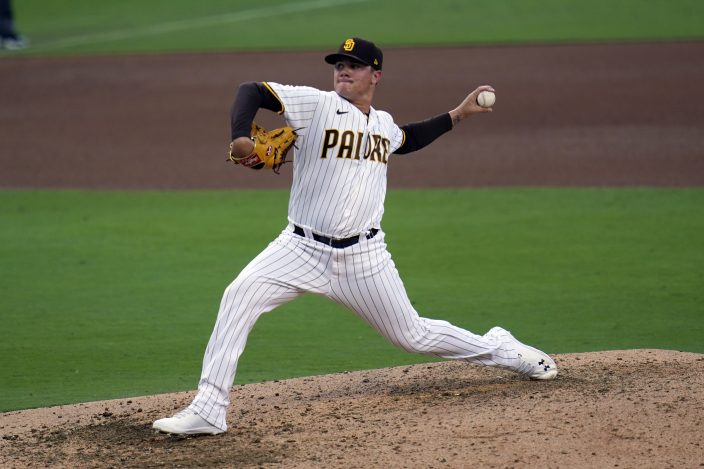 The 36-year-old Stammen, who hadn’t started since 2010 with the Washington Nationals, pitched a perfect first inning and made way for Tim Hill with one on and two out in the second. Hill retired Matt Carpenter, got the first two outs of the third and then handed off to Pierce Johnson. Johnson loaded the bases on a single and a walk but struck out rookie cleanup hitter Dylan Carlson.

Austin Adams came on and struck out Paul Goldschmidt, who hit a three-run homer in St. Louis’ 7-4 win in Game 1. Adams wound up with the win.

St. Louis had another scoring chance in the sixth when Yadier Molina hit a one-out double off rookie Luis Patiño and took third on Paul DeJong’s grounder. Patiño got Dexter Fowler to fly out to the warning track in right-center to end it.

Emilio Pagán threw a perfect seventh and Drew Pomeranz walked one in the eighth.

The bullpen had been one of the Padres’ strengths coming into the season but lost several members to injuries, including closer Kirby Yates, who led the majors with 41 saves last year. General manager A.J. Preller replenished it just before the trade deadline.

Flaherty was brilliant as well, allowing one run and six hits in six innings while striking out eight and walking two.

The loss ended a season that saw the Cardinals shut down by a virus outbreak in the early going. Manager Mike Shildt's team earned a playoff spot by last Sunday by winning on the final day of the regular season.