While Sevilla held Barcelona to a 1-1 draw at Camp Nou, Real Madrid went to the top of the standings after Vinícius Júnior and goalkeeper Thibaut Courtois helped earn a 2-0 victory at Levante.

Barcelona and Sevilla have a game in hand and trail Madrid by three points. 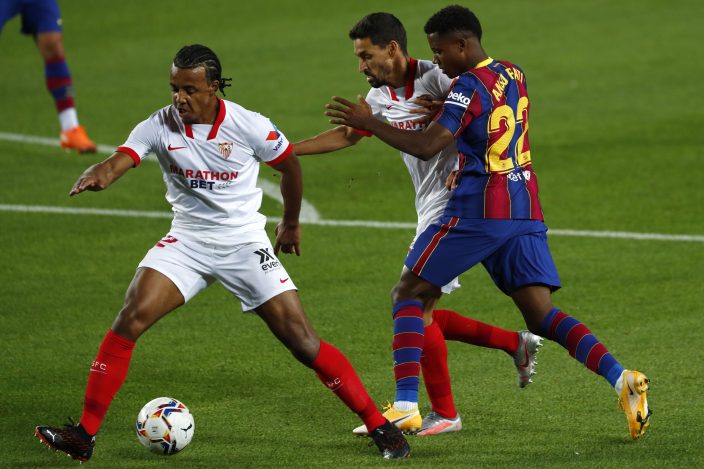 Challenging Barcelona and defending champions Madrid for the title is not out of the question for Julen Lopetegui’s well-disciplined Sevilla after this performance. A pressure defense anchored by Fernando and Jules Kounde shut down Lionel Messi for long periods and forced Barcelona into making an unusual number of bad passes.

“Getting a point at this ground is always tough, (but) I am not satisfied. We had our chances. It is too bad we couldn’t have gotten a better result,” Lopetegui said. “We had a game plan and wanted to carry it out.” 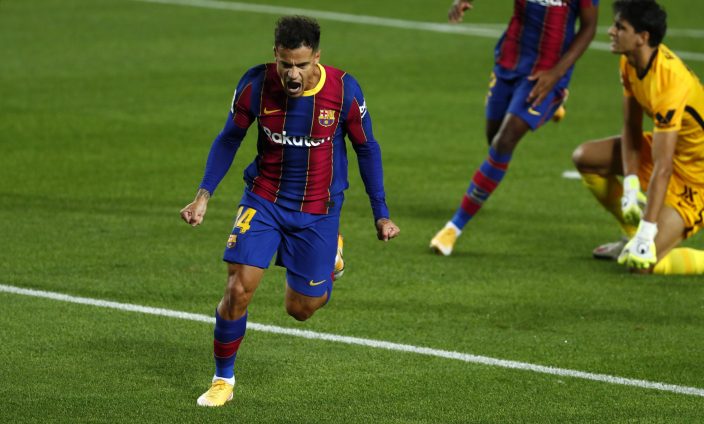 Sevilla's intense pressure up the pitch made Barcelona work extra hard to just get the ball past midfield. Very often, it didn't make it, losing possession in uncharacteristic fashion for a squad that prides itself on quality passing.

Striker Luuk de Jong put Sevilla ahead in the eighth minute when he blasted home a loose ball that fell to him in the heart of the box after a corner.

Barcelona hit back two minutes later when Messi drifted back into midfield and lobbed forward a pass to meet Jordi Alba’s run from the left side. Jesús Navas tried to intercept the pass, only to knock it into the path of Coutinho who fired home. 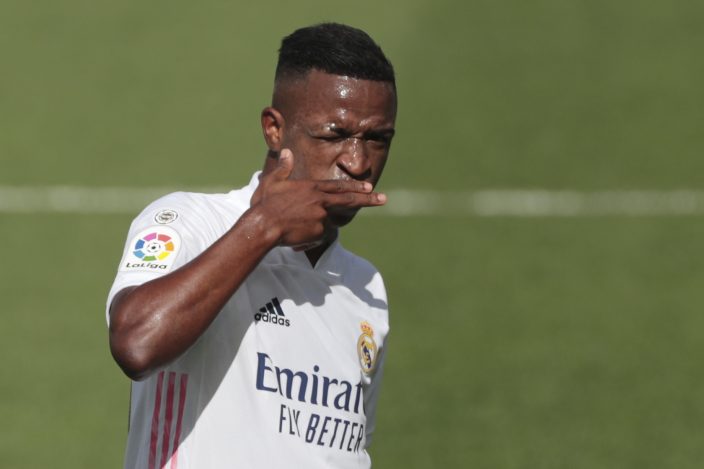 Lopetegui, the coach who was fired from both Spain and Real Madrid in 2018, has resurrected his career in Seville. His team hasn’t lost in 18 straight league games going back to the last campaign, when it won the Europa League title.

He lost his job at Madrid after a humbling 5-1 defeat at Camp Nou in 2018 and his Sevilla team lost 4-0 here last season.

This time, a possible win was inches away when Barcelona defender Ronald Araújo deflected a dangerous cross off the bar of his own goal in the 64th.

American Sergiño Dest made his debut for Barcelona when he replaced left back Jordi Alba.

Barcelona had won all its matches — including three preseason games — since Koeman took over following its humiliating 8-2 defeat to Bayern Munich in the final game of last season.

“We lost more balls than we usually do ... but one week, three matches, and seven points, we have to be happy,” Koeman said about his team’s start.

For a second straight game, Vinícius once again led his team in attack. Courtois protected the advantage when Levante pushed for an equalizer before Karim Benzema scored Madrid’s second goal on the final kick of the match.

Vinícius showed some fine finishing when he curled a right-footed shot inside the far post in the 16th minute. Later, he missed two clear chances to put the result beyond doubt.

Courtois made an excellent save in the second half when he used his foot to parry a deflected shot that caught him falling the wrong way.

“(Courtois) saved us, but just like any goalkeeper that’s what he does,” Madrid coach Zinedine Zidane said.

Rodrigo Ely’s goal gave Alavés its first win, a 1-0 victory over Athletic Bilbao, which has gone scoreless in three of four matches.

Cádiz extended its promising return to the top flight by coming back for a 1-1 draw with Granada.

Osasuna bounced back from two losses by beating Celta Vigo 2-0 at home.