Jimmy Butler is not ready to go home.

A triple-double later, he joined NBA Finals lore — and the short-handed Miami Heat might have made this title matchup a series after all.

Butler finished with 40 points, 11 rebounds and 13 assists, and the Heat beat the Los Angeles Lakers 115-104 on Sunday night to get within 2-1 — doing so with starters Bam Adebayo and Goran Dragic still unable to play because of injury.

It was the third 40-point triple-double in finals history, Butler coming up with the game of his life when the Heat needed it most. He was 14 for 20 from the field, and after the Heat surrendered a double-digit lead early in the fourth he made sure this one wouldn’t get away.

Game 4 is Tuesday night. Tyler Herro and Kelly Olynyk each had 17 points for Miami, which got 13 from Duncan Robinson and 12 from Jae Crowder. 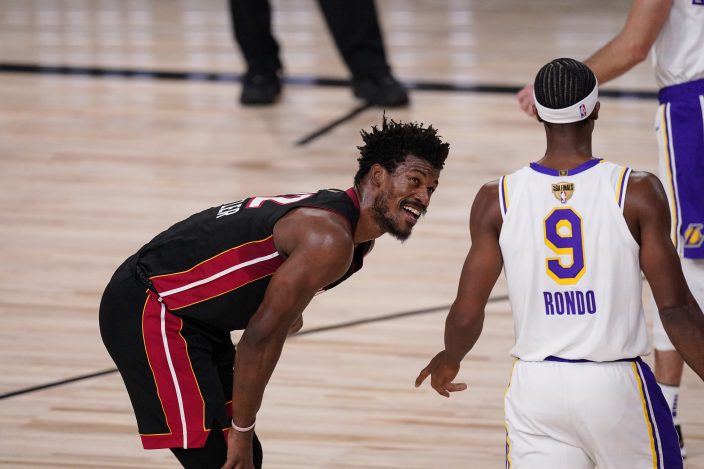 LeBron James had 25 points, 10 rebounds and eight assists for the Lakers, while Kyle Kuzma and Markieff Morris each had 19 points off the bench. Anthony Davis managed 15 for the Lakers.

Whenever the Heat looked ready to pull away and grab control of Game 3, the Lakers always found a way to find their best gear.

A 13-point Heat lead in the early going? The Lakers had the lead back in less than five minutes.

A 14-point Heat lead after a 10-0 run to start the second half? The Lakers scored the next eight.

But the rest of the way was all Miami, Butler simply unwilling to let his team go down 3-0. The only other time Miami was down 2-0 in a finals was 2006, when Dwyane Wade took over and led the Heat all the way back. 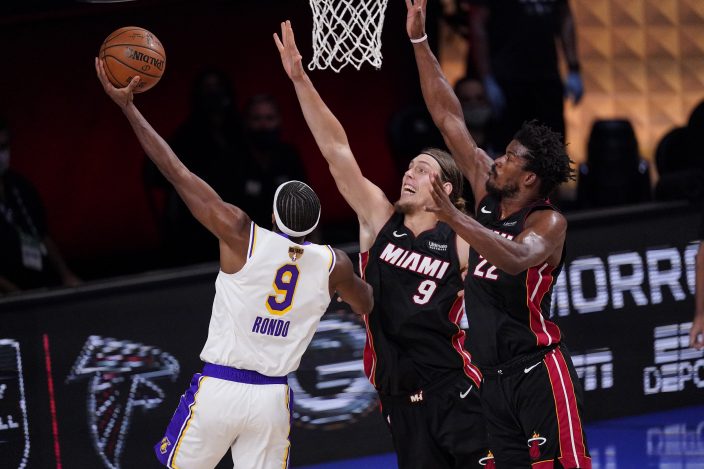 This time, it was Butler — another Marquette guy — in that role.

“I think we realized that we belong,” Butler said.

It was 22-9 Miami after eight minutes, with the Heat coming out desperate to make this a series and the Lakers looking nothing like a team on the cusp of a title — with nine turnovers in the same time span it took them to score nine points. 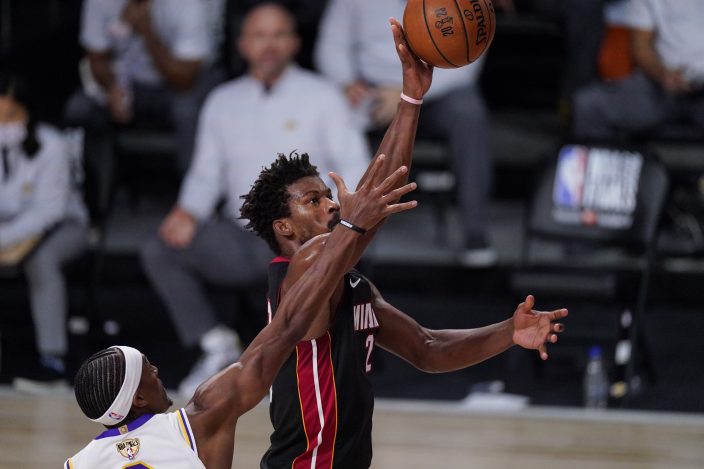 Games change quickly, and the Lakers had the lead back with 10:09 left in the half. Kyle Kuzma’s three-point play made it 29-28 Lakers, and Alex Caruso’s 3-pointer gave the Lakers their biggest lead of the half at 37-33 to cap what was an 28-11 run.

The Heat answered with an 11-0 burst to take the lead back. Davis got his third foul with 5:28 left and Miami up by five, but the Lakers weathered his absence and went into the break down just 58-54.

Lakers: Rondo hit a wild layup midway through the third, cutting from the right wing across the lane, flicking the ball up with his left hand and watching it kiss off the gray bar atop the backboard before bouncing through. ... The Lakers had 10 turnovers in the first quarter, matching the NBA high for any team in any first quarter this season.

Heat: Butler had 19 points, six assists, six rebounds and two steals by halftime. The only other player to do all that in a first half this season was Karl-Anthony Towns for Minnesota against Charlotte on Oct. 25. ... Nick Aquilino, the son of Heat neuromuscular therapist Vinny Aquilino, performed the anthem -- a recording from a Heat game with fans in Miami.

Butler became the 21st player to have a triple-double in the NBA Finals — and four of the 21 were part of Sunday’s game. James has a finals-best 10 triple-doubles, Rondo has one and so does Lakers assistant coach Jason Kidd.

Giampiero Boniperti, who was part ...