Days to next presidential debate: 8

President Donald Trump spent the weekend in the hospital after testing positive for COVID-19, a stunning development that injected a new layer of chaos into an already turbulent 2020 contest just one month before Election Day. No first-term president has suffered such a serious health setback so close to an election. 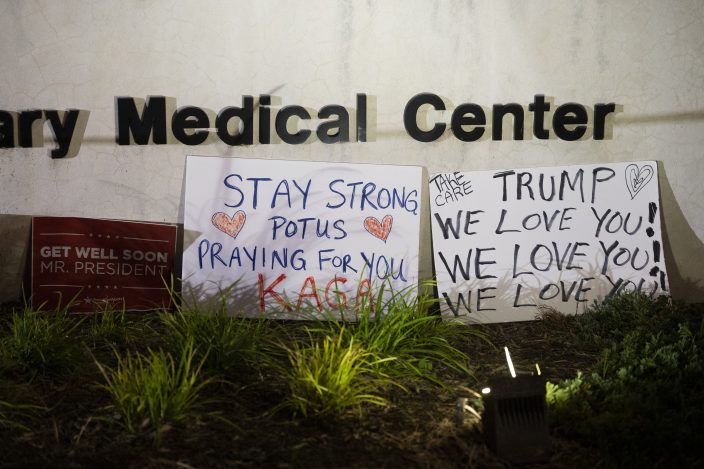 Signs left by supporters of President Donald Trump at the entrance to Walter Reed National Military Medical Center in Bethesda, Md., Sunday, Oct. 4, 2020. Trump was admitted to the hospital after contracting the coronavirus. (AP PhotoCliff Owen)

Trump's hospitalization has refocused the election right where Democrat Joe Biden wants it: on Trump's uneven leadership throughout the pandemic. The Republican president has struggled to manage the nation's response to the health crisis. After ignoring his own health experts' recommendations for several months, now he and several senior Republicans, not to mention first lady Melania Trump, are infected.

The revelation came days after an ugly debate performance that already had Trump's allies on the defensive. While things certainly seem to be trending in Biden's direction, 29 days is plenty of time for another October surprise. Or three.

How long will Trump be quarantined?

There is nothing more important to the Trump campaign than having its principal healthy and back on the campaign trail. For now, no one knows when that might happen.

A best-case scenario might allow Trump to emerge just before the next presidential debate, scheduled for Oct. 15. (The CDC says infected people can see others 10 days after symptoms first appear at the earliest, so long as symptoms are improving.) Trump could leave the hospital on Monday at the earliest, his doctors said Sunday, but his health remains in flux.

This is a moment that transcends politics, yet millions of people are already voting and Election Day looms in less than a month. Campaign manager Bill Stepien, who's also infected, described Trump as the campaign's “best asset” over the weekend. Republicans want him back ASAP.

What does the Trump campaign do now?

Trump's team over the weekend announced plans to aggressively dispatch Vice President Mike Pence and Trump's family to key swing states after Wednesday's vice presidential debate to help the campaign regain momentum. It's unclear, however, how the plan dubbed “Operation MAGA” differs from the campaign's previous strategy. The president's top surrogates have been active on the campaign trail for months.

It may be too late to adjust the campaign's message, but after trying to downplay the pandemic for months, Republicans now have no choice but to take seriously the deadly disease and the its mounting death toll.

Is the VP debate suddenly a much bigger deal?

Pence and Sen. Kamala Harris are set to face off Wednesday night in Utah for the only vice presidential debate. Trump's health status makes the typically lower-profile affair more consequential.

Vice presidential candidates are typically quite cautious when in the spotlight, aware that their principal responsibility is to do no harm to the top of the ticket. The burden to get them to answer difficult questions falls to the moderator, Susan Page, the Washington bureau chief of USA Today.

Pence may be particularly vulnerable given his role as the head of the White House's coronavirus task force. By most standard measures, America has fared far worse than other developed countries in controlling the virus.

Can Biden keep his party focused?

This is a delicate moment for Democrats.

We saw Republicans seize on a handful of ugly social media attacks from low-profile liberals who wished the president ill — or worse — in the immediate aftermath of his diagnosis. Such comments have largely faded away, which is good for everyone involved.

Biden needs to ensure his is the dominant voice for his party through Trump's health crisis. The Democrat has been delivering an optimistic message of unity since the very beginning of his campaign, a message that meets this moment as well. He was roundly praised for pulling attack ads off the air after Trump's hospitalization, and his surrogates on Sunday largely kept up the positive tone.

The nation's attention is focused on Trump's inability to manage a crisis in public health that includes his own. His campaign desperately wants to shift the focus. And misplaced resentment or pettiness at a moment like this would help them do it.

We're seeing in real time the effects of Trump's well-documented, often casual association with facts. In a genuine moment of national crisis, many people don't know what to believe about the health of their leader.

Trump's medical team and advisers offered conflicting information and refused to answer key questions about his health throughout the weekend. Even before the latest round misinformation, 7 in 10 Americans did not believe what Trump says about the coronavirus, according to a recent ABC News/Ipsos poll.

At moments like these, a nation needs to be able to trust its leaders. Right now, it doesn't.