An Australian man who accused Cardinal George Pell of sexually abusing him denied Monday he was bribed for his testimony, shooting down the latest conspiracy theory to roil the Vatican amid a corruption investigation into its shady finances.

Italian newspaper Corriere della Sera has speculated in recent days that Vatican investigators were looking into whether Pell’s nemesis at the Vatican, ousted Cardinal Angelo Becciu, wired 700,000 euros ($823,000) in Vatican money to a bank account in Australia, and whether that money was tied to Pell’s sex abuse trial.

Pell, brought in by Pope Francis to bring accountability and transparency to the Vatican’s opaque finances, was convicted but ultimately absolved by Australia's High Court of allegations he molested two choirboys in St. Patrick’s Cathedral in Melbourne while he was archbishop in the 1990s. Cardinal George Pell has a drink in a cafe at the Vatican, Sunday, Oct. 4, 2020. Cardinal George Pell, who left the Vatican in 2017 to face child sexual abuse charges in Australia, returned to Rome on Wednesday to find a Holy See mired in the type of corruption scandal he worked to expose and clean up. (AP PhotoGregorio Borgia)

Corriere speculated that Becciu might have “bought” the testimony of Pell’s accuser to get Pell out of the Vatican. Becciu and Pell were known to have clashed over the Australian’s financial clean-up efforts at the Holy See.

The Corriere report had no sourcing, attribution or details and the report appeared more an effort to discredit Becciu and distract attention from the shortcomings of the Vatican prosecutors' primary investigation into a London real estate venture.

Becciu has strongly denied the allegations. 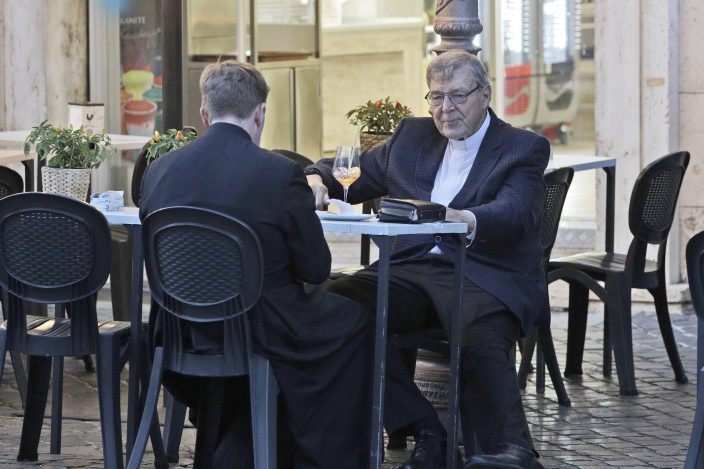 “In relation to what has been published by some organs of information, I categorically deny any interference in the trial of Cardinal Pell,” Becciu said in a statement released by his lawyer, Fabio Viglione.

Vivian Waller, a lawyer for the prosecution’s key witness whose testimony led a jury to initially convict Pell in 2018, said Monday her client hadn't been bribed.

“My client denies any knowledge or receipt of any payments,” Waller said in a statement. “He won’t be commenting further in response to these allegations.” 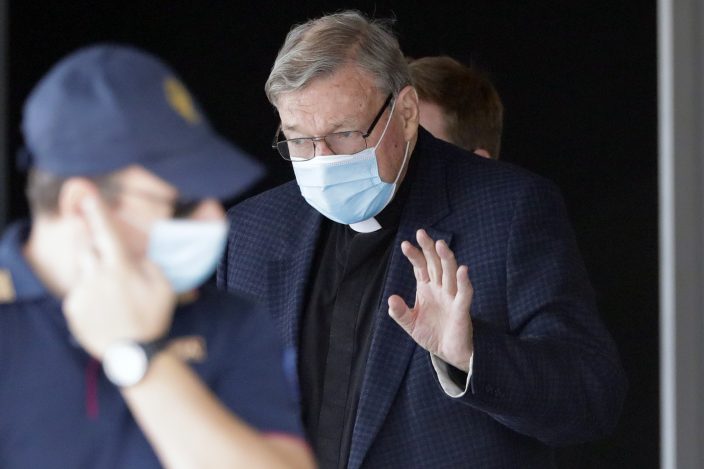 Australian Cardinal George Pell waves as he arrives at Rome's international airport in Fiumicino, Wednesday, Sept. 30, 2020. Pell took a leave of absence from his job in 2017 to stand trial in his native Australia on historic child sexual abuse charges, for which he was ultimately acquitted. (AP PhotoAndrew Medichini)

Pell was forced to take a leave of absence from his job as Pope Francis’ economy minister in 2017 to return to Australia to face the charges and ultimately stand trial. After Australia’s High Court absolved him in April, Pell returned to Rome last week to clean out his Vatican apartment, but has said he intends to make his home in Sydney.

Australian prosecutors’ star accuser, known in court as “Witness J,” first went to police with allegations against Pell on June 18, 2015 — only 18 months after Francis appointed the cardinal as Prefect of the Secretariat for the Economy and well before his friction with Becciu reached crisis point.

Victoria Police were under pressure at the time to the bring church pedophiles to justice after a state inquiry and then a federal inquiry into institutional abuses of children exposed the extent to which clerics had perpetrated and enabled the molestation of children over decades. 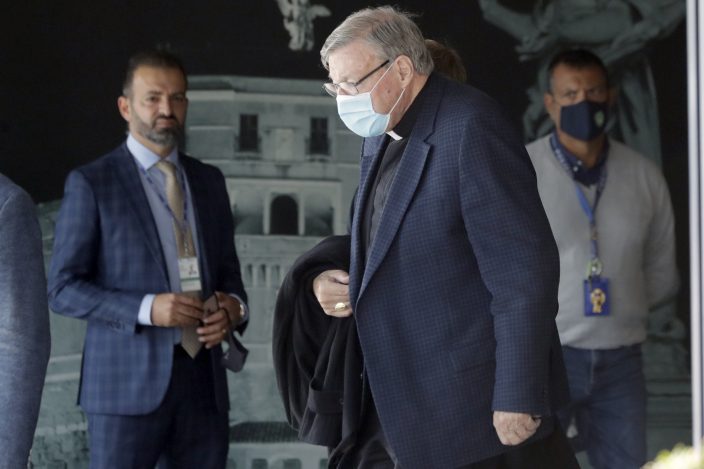 Australian Cardinal George Pell arrives at Rome's international airport in Fiumicino, Wednesday, Sept. 30, 2020. Pell took a leave of absence from his job in 2017 to stand trial in his native Australia on historic child sexual abuse charges, for which he was ultimately acquitted. (AP PhotoAndrew Medichini)

Pell’s lawyers argue Victoria Police set up a “Get Pell” operation at least a year before any complaint was received about him. His supporters say he ultimately became the fall guy for all the failings of the Australian Catholic Church, but never sexually abused anyone.

The Associated Press asked Pell’s lawyers on Monday if Pell suspected Becciu bribed witnesses to testify against him. The lawyers didn't immediately respond.

The Victoria Police media unit said Monday they couldn't find any record that the Vatican had alleged witnesses against Pell were bribed with Vatican money.

Pell said a week after his release from prison that he thought Witness J had been “used” by his enemies. He suggested his prosecution was linked to his corruption fight in the Vatican, but said he had no evidence of a link.

The Vatican didn't immediately respond to questions about whether its investigators were pursuing an Australian tangent to their corruption investigation.

Vatican prosecutors have been investigating the secretariat of state’s 350 million-euro investment in a London real estate venture for over a year, but to date no indictments have been handed down.

Becciu was involved in the initial investment, but his successor actually authorized payments of tens of millions of euros in fees to the middlemen most implicated in the money-losing venture. Becciu has denied any wrongdoing and he was fired last week by Francis over another scandal: allegations that he wired 100,000 euros in Vatican funds to a charity headed by his brother. He has denied wrongdoing.

Pope commits to clean finances amid scandal in backyard