There seemed to be a dark cloud forming over the Carolina Panthers after starting the season 0-2 and losing 2019 All-Pro running back Christian McCaffrey to a high ankle sprain.

There was even talk they were headed for the Trevor Lawrence sweepstakes.

But the Panthers have gotten quality production from backup running backs Mike Davis, and, to a lesser degree, Reggie Bonnafon, and the team has stepped up as a whole by posting back-to-back wins against the Chargers and Cardinals to reach .500. That leaves Carolina just one game behind Tom Brady and the Tampa Bay Buccaneers in the NFC South. 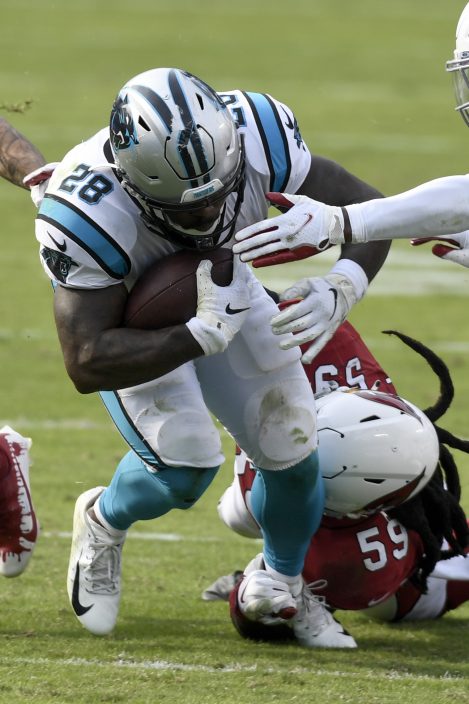 Carolina Panthers running back Mike Davis is tackled by Arizona Cardinals outside linebacker De'Vondre Campbell during the second half of an NFL football game Sunday, Oct. 4, 2020, in Charlotte, N.C. (AP PhotoMike McCarn)

The 27-year-old journeyman has run for 130 yards on 29 carries and caught 13 passes for 72 yards while scoring two touchdowns in the featured role the last two weeks. Bonnafon, who was called up from the practice squad, has chipped in with 12 carries for 69 yards and two receptions for 18 yards and a touchdown.

Behind a solid mix of run and pass, the Panthers were able to mount four scoring drives of 75 yards or more and control the clock for more than 37 minutes in a 31-21 win over the Cardinals. 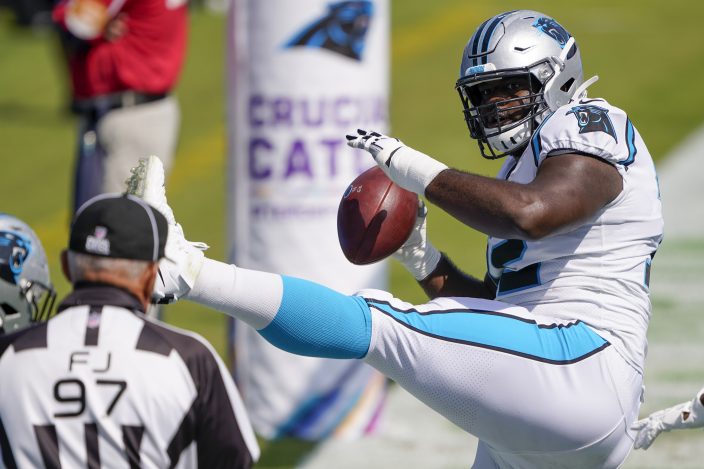 Carolina Panthers running back Mike Davis celebrates after scoring against the Arizona Cardinals during the first half of an NFL football game Sunday, Oct. 4, 2020, in Charlotte, N.C. (AP PhotoBrian Blanco)

“When the (McCaffrey) injury first happened I said that we think Mike Davis is a really good player and we think he's a starting running back in this league,’" Rhule said. “There was no doubt in my mind that he was going to play well. And I like the way that he runs — he's downhill and he's physical."

He called Bonnafon “versatile and dependable.”

“Those two guys have stepped up and played really well when we needed — and this week we needed it," Rhule said.

McCaffrey is expected to miss four to six weeks, but Rhule said he is “attacking his rehab” and making good progress.

What's even more impressive is the Panthers have been able to run the ball without their best offensive lineman, Russell Okung, who has missed the last two games with a groin injury.

A week ago, the Panthers red-zone offense was featured in the “What Needs Help” section of this analysis after scoring one touchdown on six trips inside the Chargers 20-yard line. Well, the Panthers wasted no time fixing that problem, scoring touchdowns on their first four trips in the red zone against the Cardinals to build a 28-7 lead. Rhule had said the key to turning things around was being able to run the ball in that part of the field.

Carolina was able to effectively mix the run with the pass — and it helped that Bridgewater created a play with his feet, scrambling out of the pocket for an 18-yard TD run.

One thing the Panthers will need to correct heading into next week: mental mistakes. Carolina was penalized 10 times for 72 yards, leaving Rhule a little frustrated. One of those included a late hit by on rookie safety Jeremy Chinn in the fourth quarter. “Too many penalties, too many lack-of-composure penalties at the end of the game,” Rhule said. “That’s something that I will try to address. I have already addressed it. I’ll try to address that this week.”

Panthers general manager Marty Hurney appears to have struck gold with the addition of free agent wide receiver Robby Anderson this past offseason. Anderson has caught 28 of 34 passes thrown his way from Bridgewater in the first quarter of the season for 377 yards and a touchdown. Wide receiver Curtis Samuel also had some big catches to move the chains on third downs.

Defensively, the Panthers did a much better job of tackling on Sunday.

Carolina was hoping D.J. Moore would emerge as Bridgewater's No. 1 go-to receiver this season, but he's off to a slow start. Moore has 18 catches for 288 yards and has yet to find the end zone. His numbers are well off the pace from a year ago when he made a career-high 87 catches for 1,175 yards. On Sunday, Moore got off to a rough start when he dropped an early pass and later was called for offensive pass interference.

The Panthers were hoping to get Eli Apple back in the mix Sunday, but the veteran cornerback reinjured the hamstring that kept him out of the team's first three games. It now looks like it could be a while before the veteran returns. Cornerback Donte Jackson missed some time with a foot/toe injury, but was able to finish the game. Defensive tackle Kawann Short was able to return on Sunday after missing two games with a shoulder injury.

16 — Streak of consecutive made field goals by second-year kicker Joey Slye that ended Sunday after he missed from 46 yards. Still, Slye has made 10 of his 11 field-goal attempts this season.

Rhule said his goal for this season was for his young team to get better with each passing week. The Panthers are doing just that. Carolina has steadily improved over the course of four weeks and players now appear to be playing faster and looking more comfortable with their respective schemes on offense and defense entering Sunday's game at Atlanta.