The Rams are 3-1 after the first quarter of the NFL regular season for the second consecutive year, even after a win over the Giants that felt like a setback for Los Angeles' previously powerful offense.

But the only similarity between the last two seasons is the record, according to left tackle Andrew Whitworth. The current Rams are playing at a higher level, bouncing back more quickly and generally looking smarter on both sides of the ball.

“This feels like an entirely different 3-1 to me, and that's what I feel good about,” Whitworth said Monday. 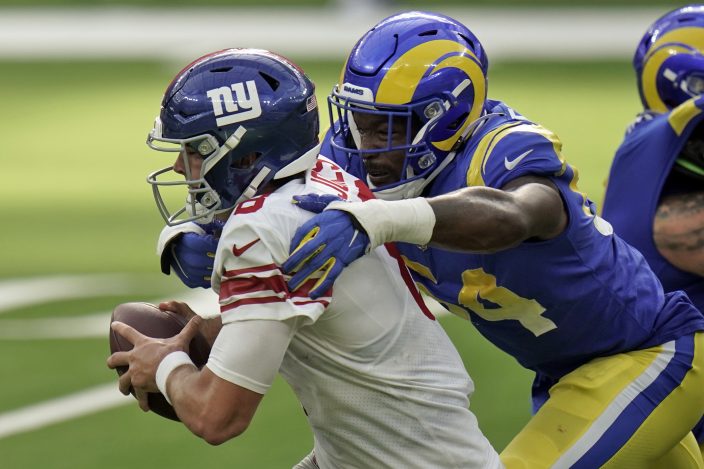 The Rams started 3-1 last season on the way to a 9-7 finish. That start in 2019 included three consecutive wins before an embarrassing 55-40 home loss to a Tampa Bay team that finished 5-11.

“I didn't think we played very good football even in the three wins we had,” Whitworth said of 2019. “We were really sloppy, and it felt like we caught a lot of breaks. ... I think in (2020), we feel pretty good about the way we're executing. When you're executing well, you just start to fine-tune from there. We're putting hats on hats. We're playing physically. We have the right intent as a team.”

While the Rams see the right efforts on both sides of the ball, the offense didn't have much to celebrate Sunday except its resilience in the 17-9 win over New York. 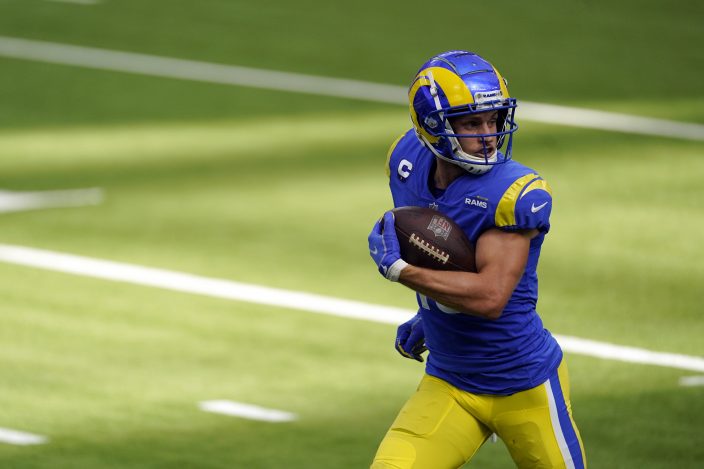 Los Angeles Rams wide receiver Cooper Kupp runs for a touchdown against the New York Giants during the second half of an NFL football game Sunday, Oct. 4, 2020, in Inglewood, Calif. (AP PhotoAshley Landis)

Jared Goff's group went nearly 45 minutes between touchdowns and was held to a season-low 240 yards by the winless Giants. The Rams' once-formidable running game managed only 58 yards, including just 13 net yards on 11 carries in the second half while LA had the lead.

But Whitworth is happy the offense made adjustments and grinded out a victory. Cooper Kupp got loose for a 55-yard touchdown reception because the Rams tricked the Giants' secondary into busting a coverage, and Kupp did the rest with his trademark elusiveness and speed in the open field.

“The teams that are good, they find ways to win those games,” Whitworth said. 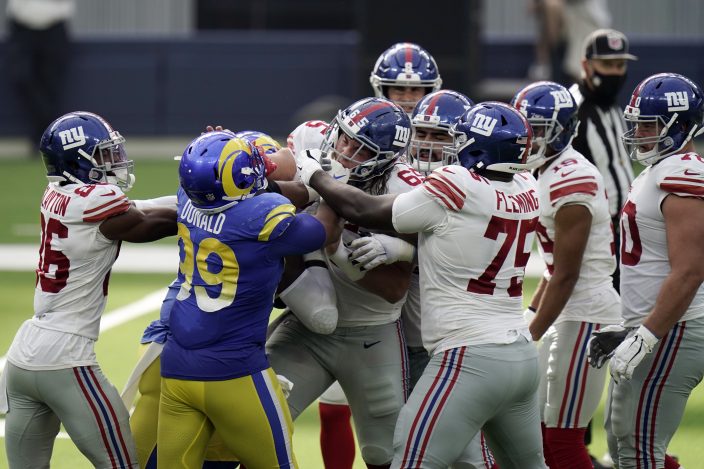 Members of the Los Angeles Rams and New York Giants get into a shoving match during the second half of an NFL football game Sunday, Oct. 4, 2020, in Inglewood, Calif. (AP PhotoJae C. Hong)

The Rams' defense kept New York out of the end zone and gave up just two drives longer than 50 yards. The Giants' offense might be awful, but Los Angeles did what was required to keep its own struggling offense in the game, right down to Darious Williams' clinching interception in the final minute. The effort was particularly encouraging after giving up 35 points in Buffalo one week earlier.

The running game never got going after three strong weeks with Malcolm Brown and Darrell Henderson. Whether it was the Giants' defense anticipating the Rams' run schemes or the running backs being unable to execute them, the foundation of Los Angeles' offense was cracked.

Williams is emerging as a playmaker for the defense with his interception and two passes defensed on a four-tackle day. The 27-year-old defensive back became an NFL starter for the first time this season after Troy Hill was moved to nickel back, He has responded with mostly excellent coverage opposite Jalen Ramsey, whose presence frightens most quarterbacks into throwing regularly to the other side of the field. Williams even gave himself a cool nickname after the game, saying he wanted to be a “red dot” on defense, like the sight on a sniper rifle.

Henderson got just eight carries, including four in the first quarter, after a combined 32 in the previous two games. The second-year pro looked ready to take charge of the three-back rotation, but that's less clear now.

Linebacker Micah Kiser injured his groin during the game, depriving the Rams of a starter down the stretch at a thin position. Rookie safety Jordan Fuller missed the game with a shoulder injury.

0 — The number of Rams players who apparently saw the start of the postgame fight between Ramsey and Giants receiver Golden Tate, whose off-the-field family dispute boiled over before and after the final whistle. Safety John Johnson said the Rams knew the game was personal for Ramsey.

“I think a few of us had a feeling it was gonna be a little chippy,” Johnson said. “So if he wants to talk, as long as he’s not putting the team in detriment and he’s doing his job, hey, that’s his personality. That’s his way. So you’ve just got to let him go. Make sure his head stays in football-wise, and don’t get too distracted.”

The Rams have to make their third cross-country trip in four weeks to face Washington (1-3). Along with guarding against the troubles of travel, they must come up with an answer for the Giants' defensive tactics, which are likely to be copied by opponents.