Earning their first win of the season in October put the Philadelphia Eagles in first place in the NFC East.

They need to improve in many areas to stay there.

Despite missing six starters on offense, the Eagles (1-2-1) knocked off the also injury-depleted San Francisco 49ers 25-20 on Sunday night to move atop the division standings at the quarter-point of the season. Philadelphia Eagles linebacker Alex Singleton (49) returns an interception for a touchdown against the San Francisco 49ers during the second half of an NFL football game in Santa Clara, Calif., Sunday, Oct. 4, 2020. (AP PhotoJed Jacobsohn)

“I think the one thing that’s really stood out this first month is just how resilient this football team is,” Eagles coach Doug Pederson said Monday. “We have not played our best football, I don’t feel. We’ve kind of shot ourselves in the foot in the first three, four weeks here. Finally overcame some of the mistakes (Sunday) to put ourselves in a position to be in first place in the NFC East. But there’s a long road ahead. We’ve got to learn from the first four weeks, but at the same time, learn from it and carry it forward.

Carson Wentz shook off his league-worst seventh interception, again used his legs to make plays and led a group of reserves to a victory the team desperately needed. His perfect 42-yard touchdown pass to Travis Fulgham, fresh off the practice squad, gave the Eagles the lead for good. 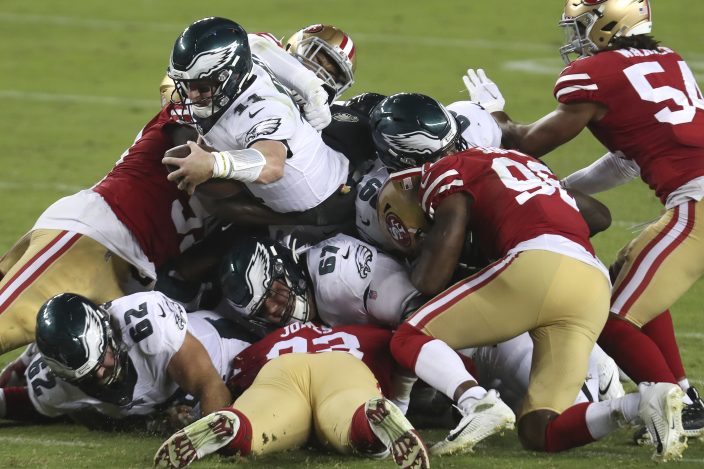 Philadelphia Eagles quarterback Carson Wentz, center left, dives forward for a first down during the second half of an NFL football game against the San Francisco 49ers in Santa Clara, Calif., Sunday, Oct. 4, 2020. (AP PhotoJed Jacobsohn)

Then Alex Singleton’s 30-yard interception return for a score helped seal it. The defense had its first three takeaways of the season against the 49ers.

Wentz has been using his legs more the past two games, keeping the ball and scrambling at times and buying time to throw it other times. He had 37 yards rushing on seven carries, including an 11-yard TD run against the 49ers. That followed a career-best 65 yards rushing and one TD in the tie against Cincinnati last week.

The defense is struggling in coverage against tight ends. George Kittle is the best in the NFL, but the Eagles couldn’t even come close to stopping him. He had 15 catches on 15 targets for 183 yards and one TD. In Week 2, Rams tight end Tyler Higbee had three TD receptions in a 37-19 win against the Eagles.

Third-string left tackle Jordan Mailata played well in his first career start. He didn’t allow a sack, protected Wentz’s blind side and opened some running lanes. Mailata had a costly false start penalty but bounced back afterward. The Eagles lost 2019 first-round pick Andre Dillard to a season-ending injury in training camp. They moved nine-time Pro Bowl left tackle Jason Peters back to his position from right guard, where he was filling for injured starter Brandon Brooks. But Peters landed on injured reserve with a toe injury. Mailata was a seventh-round pick in 2018 after starring as a rugby player in Australia.

“I’m not trying to fill anyone’s boots. I’m trying to make my own boots,” Mailata said. “I’m not a rugby player anymore. I’m a footballer.”

Linebacker Nate Gerry struggled again in pass coverage, missed tackles against the run and has generally played poorly all season.

Linebacker T.J. Edwards and safety Rudy Ford are going to “miss some time” with hamstring injuries, according to Pederson. Right tackle Lane Johnson’s surgically repaired ankle forced him to missed 25 snaps against the Niners. Pederson said Johnson’s ankle issue will linger but he will play through it.

3 — The defense had not forced one turnover in 17 quarters dating to last season before Rodney McLeod’s interception inside the red zone in the second quarter. Cre’Von LeBlanc had a strip-sack that set up the go-ahead TD. Then Singleton returned an interception 30 yards for a score.

The Eagles visit the Pittsburgh Steelers (3-0) next Sunday. The Steelers had an unexpected bye after their game against Tennessee was postponed because of a COVID-19 outbreak among the Titans.