Jimmy Butler, perhaps the NBA’s best-known barista, is not adjusting the prices at the coffee shop that he’s been operating out of his hotel room for Miami Heat teammates and staff inside the NBA bubble. Even after a win, everything at Big Face Coffee remains $20.

The plan is working, so Butler sees no reason to change.

The Heat might apply the same approach going forward in these NBA Finals. Butler played 45 minutes and had the ball in his hands on basically every possession of Game 3, when Miami won to get within 2-1 of the Los Angeles Lakers in this series. Game 4 is Tuesday night, and much like Butler’s coffee-sales strategy, the Heat may stick with what works. 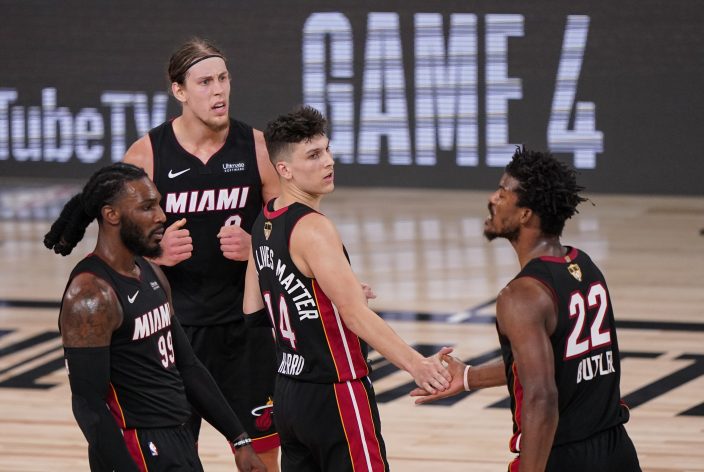 “There’s no turning back,” Heat coach Erik Spoelstra said. “He has to make some things happen for us. He did that in a brilliant way last night, and he’ll likely have to do something very similar to that again. For us to be able to accomplish what we want to accomplish, you can’t just be normal. You have to be extraordinary.”

Butler had 40 points, 11 rebounds and 13 assists in Miami’s Game 3 win. Extraordinary, the word Spoelstra used, doesn’t even truly cover it -- out of the 8,175 game appearances by players in the NBA Finals, Butler was the first to have a 40-point triple-double in a finals win, and one of only three with one regardless of outcome.

He is the reluctant superstar: Butler swears that he’d rather see his teammates fill the scorebook than do it himself, even though Spoelstra pretty much has made clear that it’s going to be high-usage-of-Butler time the rest of the way, especially if injured starters Bam Adebayo and Goran Dragic remain sidelined. 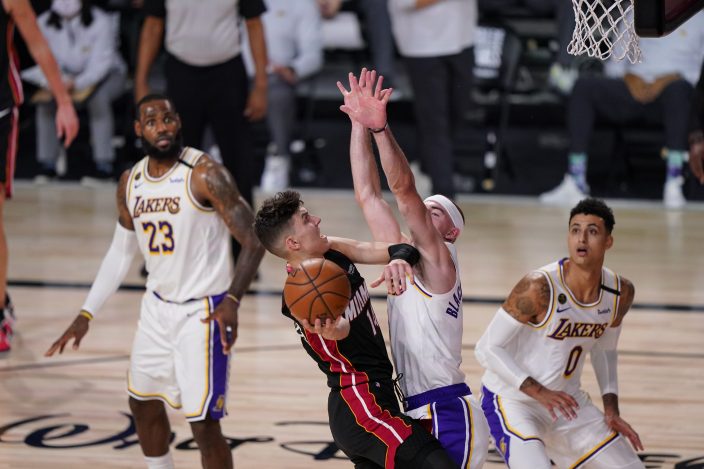 “I think they know what buttons to press to get me to play the way that they want me to play,” Butler said. “But I just want to win.”

Butler and Lakers star LeBron James share some common bonds. Both are the best players on their team. Both have an affinity for hard work and a respect toward those who join them in that commitment. And neither plans to go into games shooting for big numbers; they’d both rather pick their spots and get teammates involved.

That might not be an option for Butler right now, and James was asked Monday if he’s contemplating a similar approach. 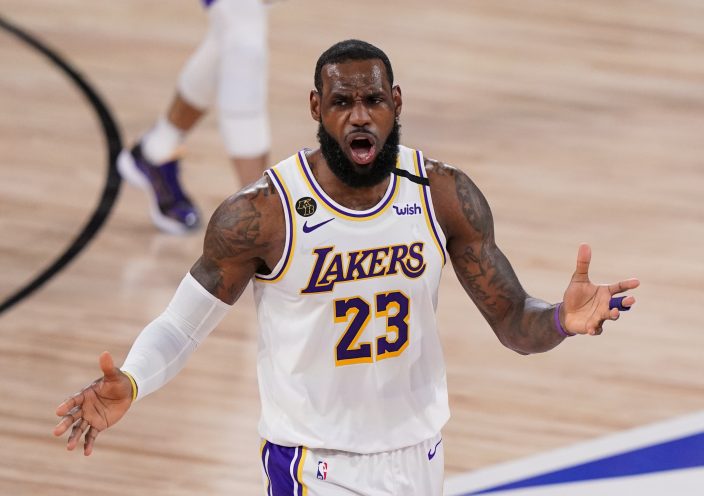 Los Angeles Lakers' LeBron James (23) reacts after no foul was called against the Miami Heat during the second half in Game 3 of basketball's NBA Finals, Sunday, Oct. 4, 2020, in Lake Buena Vista, Fla. (AP PhotoMark J. Terrill)

“I’ve never predetermined my game,” James said. “Throughout my whole life, I’ve never done that. One thing I’ve always been, I’ve always been prepared. If you’re prepared, then whatever the game, however the course happens, you’re able to make adjustments throughout the game and you’re able to impact the game because you’re prepared and you’ve put in the work. It’s just that simple for me.”

James was his usual self in Game 3: 25 points, 10 rebounds, eight assists. It just wasn’t enough, not with the sort of night Butler was having.

Spoelstra knows what James is like after a defeat, especially a playoff defeat, most especially a finals defeat. It’s no secret that James will be ready on Tuesday, when the Lakers get a second chance to move within one win of their 17th NBA title. 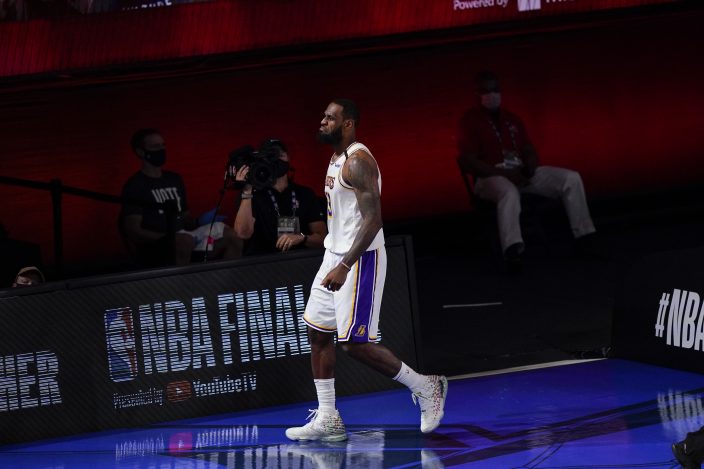 “What we’re trying to get accomplished is the toughest thing you attempt to do as a professional. It’s as hard as hell,” Spoelstra said. “Our guys have seen that. Throughout the playoffs, but in particular in this series, just to grind out and be able to get that win was extremely challenging and tough. You can expect it to be even tougher the next game. That’s what the playoffs are about, taking on big challenges.”

Not lost on the Lakers is this: They still lead the series, and led Game 3 in the fourth quarter — letting a chance for a 3-0 lead slip away.

They’re also 3-0 after losses in this postseason, didn’t drop more than one game against any of their first three playoff opponents, and likely draw some comfort from the fact that James has never not won a series in which his team had a 2-0 series edge. 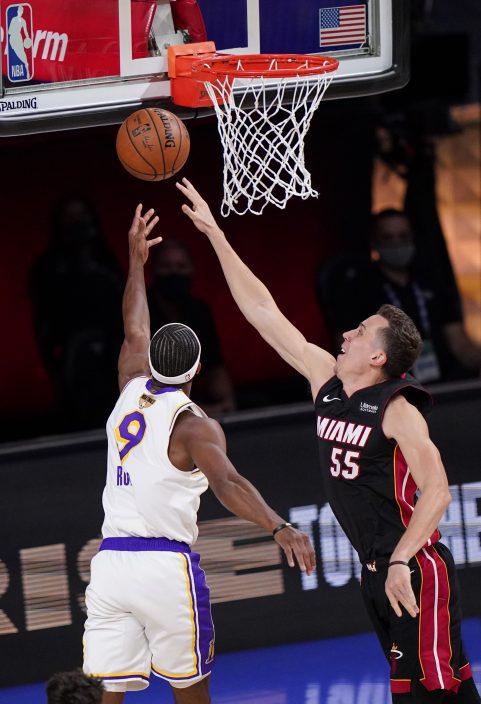 So are the Heat. Coffee, at $20 a cup, awaits them Tuesday morning.

“I don’t do free coffee,” Butler said. “We’re going to do everything the exact same like we’re supposed to do on the basketball floor.” 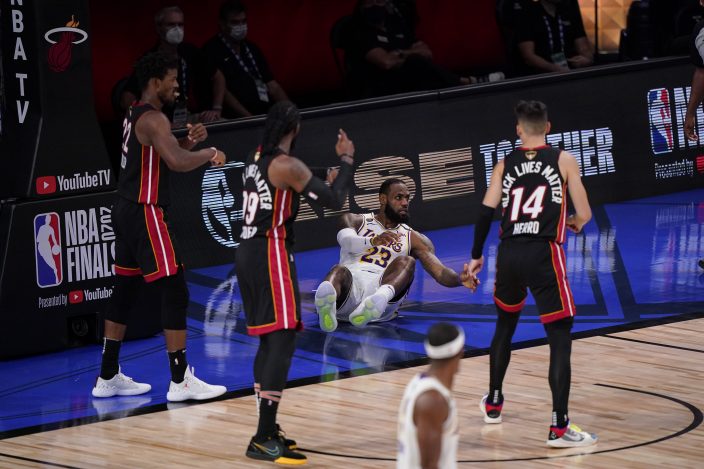