Rather than focusing on his first NHL draft as a general manager, Kevyn Adams was busy re-assuring the Buffalo Sabres fanbase he has no intention of trading captain Jack Eichel.

“I’m hoping I’m clarifying it for you, but that to me is an easy question, because we have no intention of doing that,” Adams said during the half-hour pre-draft session with reporters on Monday. “I have zero concern on Jack wanting to be here. I’ve had great conversations with him, his representatives. I’m not really sure where that’s coming from.”

Adams, however, did acknowledge other teams have called asking about possible trades, during which Eichel’s availability was broached. “But I have no interest in and no reason, as I sit here today, moving forward that you’d want to do something like that,” he said. 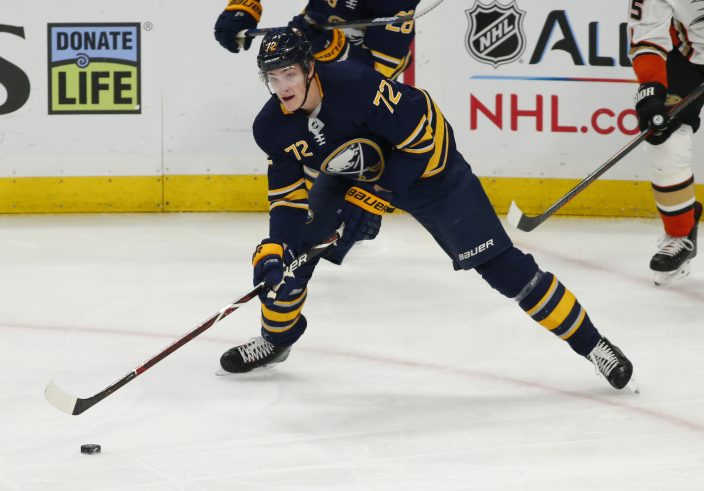 FILE - In this Dec. 22, 2018, file photo, Buffalo Sabres' Tage Thompson (72) controls the puck during the first period of an NHL hockey game against the Anaheim Ducks in Buffalo N.Y. The Sabres signed Thompson to a three-year, $4.2 million contract on Monday, Oct. 5, 2020. Thompson was eligible to be a restricted free agent after completing his rookie contract. (AP PhotoJeffrey T. Barnes, File)

Adams is a first-time general manager who took over after owners Terry and Kim Pegula reversed course and abruptly fired Jason Botterill as part of a series of cost-cutting moves in June.

Adams, a former NHL player with no previous hockey management experience, was promoted from within the Sabres parent company, Pegula Sports and Entertainment, and immediately began a purge of the team’s front-office, minor-league staff, and scouting department.

After years of spending heavily on attempting to build a winner, the Pegulas said they were focused on cost-efficiency and the franchise getting “leaner.”

It’s unclear how that sits with Eichel, who hasn’t spoken publicly since voicing his frustrations in May, when the Sabres were one of the seven NHL teams to miss the expanded playoffs. Buffalo extended its postseason drought to nine years, the league’s longest active drought.

Selected second overall in the 2015 draft, Eichel said he was “fed up with losing” and added, “It’s been a tough five years with where things have went.”

In July, Eichel revealed during a team-created YouTube program, titled “Captains Circle” that negativity directed at him and the Sabres led him staying off of social media, though he’s not deactivated his accounts.

A message left with Eichel’s agent, Peter Fish, was not returned.

Eichel is entering the third year of an eight-year, $80 million contract, and coming off a season in which he scored a career-best 36 goals despite being limited to playing 68 games.

Adams has declined to say whether the owners' cost-cutting initiatives will limit the Sabres’ ability to spend to the NHL’s $81.5 million salary cap.

“I’m not dodging the question, but I don’t look at the cap as what I’m focused on,” Adams said, last month. “I’m looking at the team that we’re trying to build, and then making sure we’re putting ourselves in a position to also adjust and be flexible.”

The Sabres have six selections in the two-day draft, starting with No. 8 on Tuesday night.

Buffalo signed center Tage Thompson to a three-year, $4.2 million contract on Monday. Thompson was eligible to be a restricted free agent after completing his rookie contract.

Thompson opened last season in the minors before sustaining a season-ending shoulder injury in his first game after being called up by the Sabres in November.

Acquired by Buffalo in a trade that sent Ryan O’Reilly to St. Louis in July 2018, Thompson has 10 goals and 21 points in 107 career NHL games.

Sabres' captain Eichel out for `the foreseeable future'