K.J. Wright is one of the few that are still around and can provide the perspective.

He was there in 2013 when the Seattle Seahawks started the season 4-0 on their way to a division title, NFC title and eventually the only Super Bowl victory in franchise history.

Seven years later, he’s still kicking around in his 10th season in the league. And once again, the Seahawks are sitting at 4-0 after Sunday’s 31-23 win at Miami. 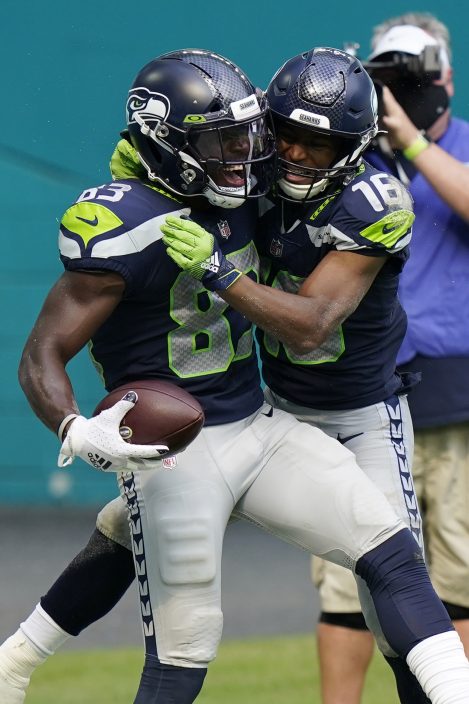 But the path in getting to 4-0 in each of those seasons — the only two times in franchise history it has been accomplished — has been completely different.

“That was a while ago. ... I guess it’s kind of been flipped,” Wright said. “(Back then) the defense was really balling and shutting teams down. And now it’s just flipped and the offense is looking unstoppable. When we bring both of those together, offense and defense just balling, we’re going to be really hard to beat.”

There was still a lot of Russell Wilson to do with Seattle’s latest victory. He threw two more touchdown passes, giving him 16 for the season and tying Peyton Manning for the most in the first four games. Chris Carson played through a knee injury suffered late last week and rushed for 80 yards and two touchdowns. 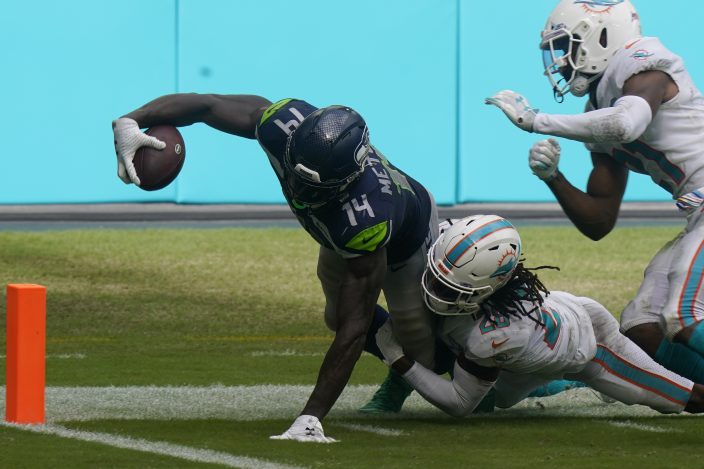 But unlike the past couple of weeks, Seattle’s defense did its part. Shaquill Griffin had a key fourth-quarter interception that led to Carson’s second TD run. Wright had one of his more active games, finishing with eight tackles, three pass breakups and a forced fumble. Most importantly, a defense that had been allowing big plays throughout the first three weeks allowed just one play of more than 25 yards. It went for 26.

“It was huge. It was a huge step for us,” Griffin said. “I feel like today we came in and we believed more in each other.” 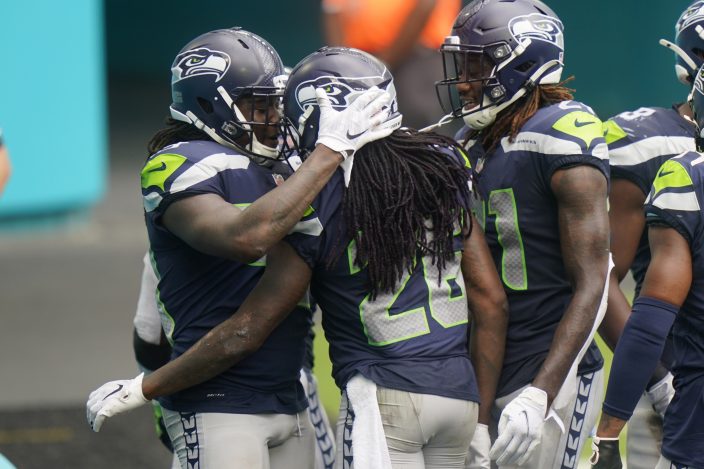 Seattle Seahawks cornerback Shaquill Griffin (26) is congratulated by his teammates after he intercepted a pass, during the second half of an NFL football game against the Miami Dolphins, Sunday, Oct. 4, 2020, in Miami Gardens, Fla. (AP PhotoLynne Sladky)

Wilson continues to be an equal opportunity distributor in the pass game. Wilson connected with nine different receivers on Sunday. No one had more than the five catches of Greg Olsen. It was the third time in four games Wilson has connected with nine different pass catchers. The only time he hasn’t this season was Week 2 when only seven different players caught passes. That level of distribution is making it difficult for defenses to key on just one option in Seattle’s pass game.

The pass rush will continue to be an issue until it finds some success. The Seahawks seemed to blitz less and played more conventional coverages in the pass game. But that meant fewer times getting to Miami QB Ryan Fitzpatrick. The Seahawks finished with just one sack and only six QB hits.

Whenever Seattle’s secondary returns to complete health, Ryan Neal is going to have earned himself a role. After making the game-saving interception a week earlier against Dallas, Neal made his first start on Sunday against the Dolphins with Jamal Adams out. Neal picked up his second interception in as many games in the first quarter and finished with six tackles and two pass breakups.

It’s kind of harsh, but Phillip Dorsett continues to be an afterthought even though he hasn’t played a game yet this year. Dorsett is currently on injured reserve with a foot injury and may be activated after Seattle’s bye. He was signed to compete for the No. 3 wide receiver spot, but David Moore has been excellent through four games and added another acrobatic TD reception against Miami.

With Josh Gordon’s pending reinstatement, there may not be a spot for Dorsett when he’s healthy to return.

For the first time in a couple of weeks, the Seahawks came out of a game without major injury concerns. The only announced injury was when Carson was being checked for a concussion late in the first half, but he was cleared and returned.

The question now is more when injured players such as Jamal Adams (groin), Quinton Dunbar (knee), Carlos Hyde (shoulder) and Jordyn Brooks (knee) may return. With the bye week ahead, there’s a decent chance several will sit against the Vikings and allow two more weeks of recovery before an Oct. 25 trip to Arizona.

0 — Seattle officially finished with zero penalties in the game. While Seattle was penalized three times, either the penalties weren’t accepted or there were offsetting fouls. It’s the fourth time in franchise history and first under coach Pete Carroll that Seattle was not penalized in a game.

The Seahawks play their third home game in four weeks hosting Minnesota on Sunday night. Seattle has won its past six meetings with the Vikings and is 8-2 all-time against Minnesota at home.