Democrats on the Senate Judiciary Committee are calling on the Justice Department to provide any missing materials from a questionnaire completed by Supreme Court nominee Amy Coney Barrett.

Barrett, who was nominated to the high court last month by President Donald Trump, signed a 2006 newspaper ad sponsored by an anti-abortion group in which she said she opposed “abortion on demand” and defended “the right to life from fertilization to the end of natural life.”

The ad was not included in materials Barrett provided to the Judiciary Committee for her pending Supreme Court nomination, nor in 2017, when she was nominated to the job she holds as a Chicago-based federal appeals court judge. 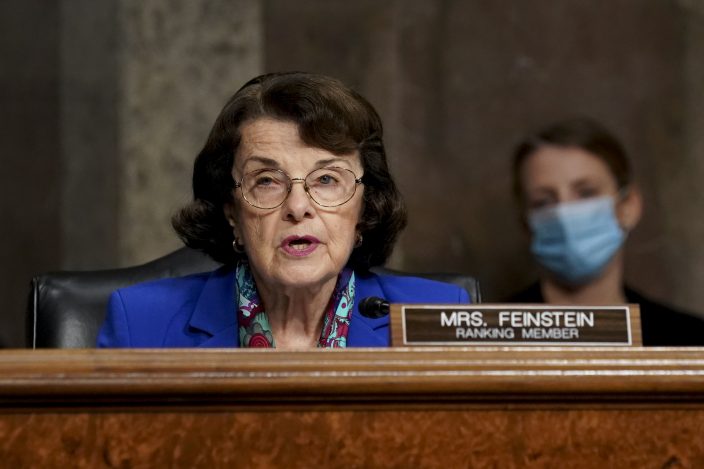 In a letter Tuesday signed by all 10 Democrats on the Judiciary panel, lawmakers asked the Justice Department to explain the omission and confirm whether any other materials have been left out from the Senate questionnaire. If so, the department should immediately provide the materials for committee review, the senators said.

A Justice Department spokeswoman said the department has received the letter and is reviewing it.

Democrats don't have the votes to block Barrett's nomination, but they are trying to slow it down as Republicans speed ahead with an aggressive timetable, starting with hearings next week, aimed at confirming her before the election. Trump backs moving ahead quickly and on Tuesday called off negotiations on further coronavirus relief, saying Senate Majority Leader Mitch McConnell should focus “full time” on confirming Barrett.

The 2006 ad, an open letter signed by Barrett and others, “opposed women’s reproductive freedoms and explicitly called for overturning Roe v. Wade,'' the landmark Supreme Court decision on abortion, senators wrote. The letter also referred to "the barbaric legacy of Roe v. Wade.''

The ad, which had more than 1,200 names attached to it, appears to be the most direct expression of Barrett’s opposition to abortion and has intensified debate over whether she would vote to restrict, if not overturn, abortion rights if confirmed to the Supreme Court.

Barrett's failure to disclose the 2006 letter “leads to additional questions about other potentially missing materials,'' the senators wrote.

It also raises concerns that the process of collecting materials responsive to the Senate questionnaire, "like the nomination process itself, has been rushed, for no legitimate reason,” the senators wrote. The letter was signed by California Sen. Dianne Feinstein, the top Democrat on the Judiciary panel, and nine other Democrats.

White House spokesperson Judd Deere said last week that Barrett, who is Catholic, has distinguished her personal views from her responsibilities as a judge. “As Judge Barrett said on the day she was nominated, ‘A judge must apply the law as written. Judges are not policymakers, and they must be resolute in setting aside any policy views they might hold,’” Deere said in an email.

Meanwhile, an outside group advocating for conservative judges announced on Tuesday a 15-member team of pro bono legal professionals who will be conducting rapid response and other campaign-style support for Barrett’s confirmation.

“The confirmation of Judge Amy Coney Barrett is the opportunity of more than a lifetime to create the first true conservative majority on the Supreme Court in over 80 years,” said Mike Davis, a former chief counsel to Republicans on the Judiciary Committee who now heads the Article Three Project. He said the group is prepared to “do whatever it takes to push Judge Barrett’s nomination over the finish line by the end of October.”