So much for that notion of a 54-hole lead giving players more time to sleep in.

The PGA of America had to get creative with an October date for the Women’s PGA Championship at Aronimink in Newtown Square, Pennsylvania, not only with about three fewer hours of daylight but with NBC having other programming commitments on the weekend.

Hannah Green, of Australia, watches her tee shot on the 8th hole during the final round of the LPGA Cambia Portland Classic golf tournament in Portland, Ore., Sunday, Sept. 20, 2020. (AP PhotoSteve Dipaola)

The TV window for the Women’s PGA on Sunday is 10 a.m. to noon on Golf Channel, and noon to 2 p.m. on NBC. The network has a NASCAR race in the afternoon.

“If you have the opportunity to see a three-hour telecast and see the leaders all through that three hours, to me as a spectator, that is a lot more appealing than watching everyone but the leaders tee off and you never get to the leaders to see a shot,” Haigh said Tuesday.

Saturday’s TV schedule is 11 a.m. to 12:30 p.m. on Golf Channel, with NBC picking up the rest of the coverage until 3 p.m. There is no need to adjust the starting times for the third round because the last group is to start at 9:32 a.m. and should finish ahead of the TV window. 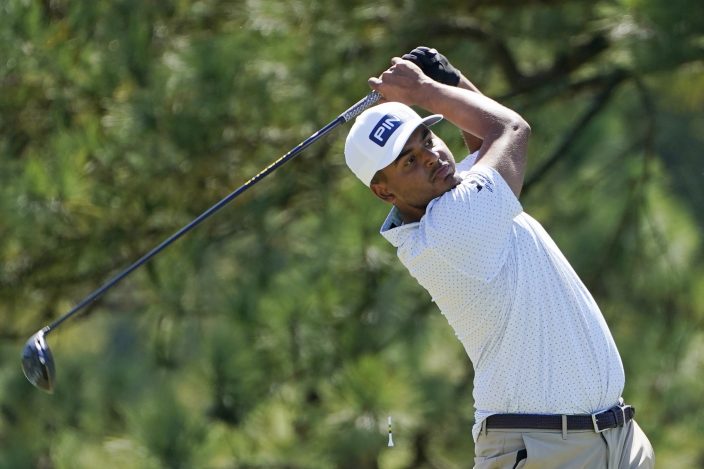 Defending champion Sebastian Munoz, of Colombia, watches his drive from the ninth tee during the second round of the Sanderson Farms Championship golf tournament in Jackson, Miss., Friday, Oct. 2, 2020. (AP PhotoRogelio V. Solis)

That, too, is subject to change.

The 132-player field means that tee times on Thursday and Friday start at 7:10 a.m., roughly four minutes after sunrise. Haigh is not certain the second round will be completed by sunset (6:32 p.m.) on Friday, in which case the cut could not be made until Saturday morning. If that were the case, the PGA of America is prepared to rearrange starting times for the third round so the leaders are shown in the TV window.

“In some ways, we could be making history this week because we will have the leaders not teeing off at the end of the wave on Sunday,” Haigh said. “And if we don’t finish on Friday, they will not be teeing off last on Saturday, either. ... And although it’s a little different and out of the box, we as partners with the LPGA and KPMG are prepared to make those changes for what we think will be a greater and a better championship for everyone to observe.”

Collin Morikawa signed up as an affiliate European Tour member knowing he would be in the majors and World Golf Championships. Based largely on his PGA Championship victory, and the COVID-19 pandemic shutting down a half-dozen top European events, he is second in the Race to Dubai behind another American, Patrick Reed.

Morikawa has yet to play a regular European Tour event. That might change if he has a chance to win the title, which would mean going to the season-ending DP World Tour Championship in Dubai.

“It possibly could be added to my schedule,” he said Tuesday. “That’s the reason why I signed up for the membership, is to try and win it. I wouldn’t just sign up just to sign up. I’ve got the Masters ahead of me. If I play well at the Masters, then we can make a good run for it and we’ll be out there in Dubai.”

Reed won the WGC in Mexico. He missed the cut in the Saudi International at the start of the year, and is playing this week at the BMW PGA Championship in England.

Hannah Green left winter in Australia to resume the LPGA Tour schedule following the COVID-19 pandemic. The worst part about her year is she probably won't get home until Christmas, the longest she has been away.

But she does have a home away from home.

Green said Golf Australia last year decided to rent a house in Orlando, Florida, for players to stay in.

“There is a couple that lives there full-time, but there's three or four other beds that we can stay in,” she said. “So myself and Sue (Oh) have been using that this year. I've been there once this year, but with the little breaks in the schedule, I'll be going there next week.”

She plays at Orange Country National. And she has friends. Two more Aussies, Curtis Luck and Ryan Ruffels, are at Isleworth.

“It's like five minutes, so we've been very fortunate to get on to there,” Green said.

Sebastián Muñoz is so excited to play the Masters for the first time that he didn’t want to waste an opportunity to see Augusta National.

And then he unwittingly wasted an opportunity.

Muñoz qualified a year ago in September by winning the Sanderson Farms Championship. So when he played his final tour event of 2019 the last week in November, he drove over from Sea Island and spent two days at Augusta National.

“The first day it was gorgeous,” he said.

Muñoz felt the course was playing long, but he was told it would be different in April. The next day, he woke up for an 8 a.m. tee time and the temperatures were in the upper 40s.

Little could he have known last November that his Masters debut would be this November because of the COVID-19 pandemic.

Not to worry. Muñoz, a Colombian who played at North Texas, at least had some idea what to expect. He was surprised to hit 3-iron into the green at the par-4 11th, and 5-iron into No. 10. It was playing long enough that his drive on the 18th didn’t reach the first bunker on the left side of the fairway.

What figures to be similar is the quiet. The Masters is not allowing spectators. That will have to wait until next April. Muñoz reached the Tour Championship, making him eligible for the Masters next year, too.

“The good thing is that I’m going to play that one and then in April,” he said. “So hopefully, I’ll get the best of both worlds.”

The Latin America Amateur Championship scheduled for Jan. 14-17 at Lima Golf Club in Peru has been canceled because of the COVID-19 pandemic. Future plans for the event will be announced later. The tournament began in 2014 and is run by the Masters, R&A and USGA. ... Titleist is touting a new generation of its Pro V1 golf ball at the Shriners Hospitals for Children Open, noteworthy only because it was 20 years ago in Las Vegas when the company first unveiled its multi-component golf ball. According to a press release that year, the new golf ball had “the interim stamp of Pro V1.” The name never changed. Billy Andrade, who won the tournament in 2000, was among 47 players who switched to the new Pro V1. ... Georgia Hall and Mel Reid won consecutive starts on the LPGA Tour, the first time since 1996 two women from England, Trish Johnson and Caroline Pierce, won consecutive LPGA events. ... Parker Coody, the grandson of 1972 Masters champion Charles Coody, won the Southern Highlands Collegiate to earn a spot in the PGA Tour event in Las Vegas.

With six tournaments left in the LPGA Tour season, American players have the most victories (4) of any country.

“It's not going to be as weird as a U.S. Open in December.” — Lydia Ko, on whether it felt strange playing a major in October.