The British government is on Friday set to announce further support for firms to retain staff in the coming months if they are forced to close as a result of the imposition of further lockdown restrictions.

With the government expected to tighten restrictions over the coming days to deal with a sharp spike in new coronavirus infections, there are growing concerns that the economy will suffer during the winter and that hundreds of thousands of jobs may be lost.

Treasury chief Rishi Sunak said he understood how “people are worried about the coming winter months.” 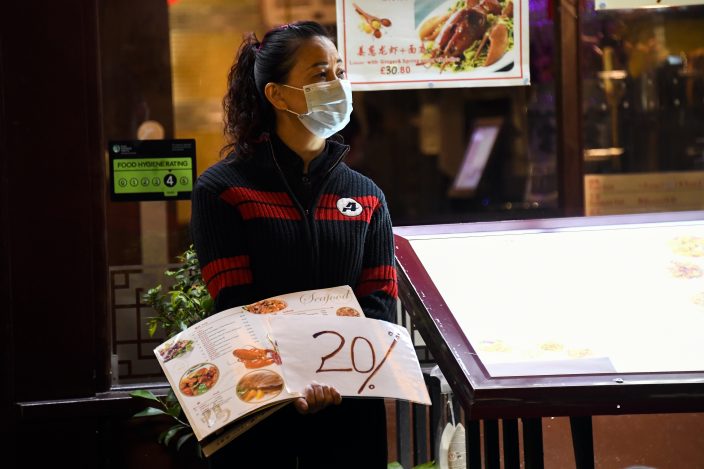 FILE - In this Sept. 22, 2020 file photo, a waitress wears a protective mask as she stands at the door of a restaurant in Soho, in London, Tuesday, Sept. 22, 2020. Figures released Friday, Oct. 9, 2020 from the Office for National Statistics show that the British economy grew by far less than anticipated during August, raising concerns that the recovery from the coronavirus recession was already stuttering even before the reimposition of an array of lockdown restrictions. (AP PhotoAlberto Pezzali, file)

He is being urged by businesses, politicians and unions to accompany any lockdown restrictions with a financial support package to prevent mass unemployment. Specifically, he is being urged to back local job retention programs, whereby the government steps in to pay the lion’s share of the salaries of workers who are forced to go idle. A national program that has helped keep a lid on unemployment is due to stop at the end of October.

“The Chancellor will be setting out the next stage of the Job Support Scheme later today that will protect jobs and provide a safety net for those businesses that may have to close in the coming weeks and months," a Treasury spokesman said.

New figures released Friday show that the British economy's bounce back from recession slowed significantly in August. The Office for National Statistics said the economy expanded by only 2.1% in August from the month before. That was way down on the 6.4% expansion in July and substantially lower than the 4.6% anticipated in financial markets.

The hospitality sector was one that performed well, boosted by many people's decision to take their holidays in the U.K. instead of going abroad, as well as the government's dining discount scheme during the month. Under the Eat Out to Help Out program, sitting customers could receive a 50% discount on food and non-alcoholic drinks at participating restaurants between Monday and Wednesday up to 10 pounds ($13) per person.

“There was strong growth in restaurants and accommodation due to the easing of lockdown rules, the Eat Out to Help Out scheme, and people choosing summer staycations," statistician Jonathan Athow said.

However, he said, many other parts of the services sector recorded “muted growth.” Manufacturing was also struggling with car and aircraft production still below levels seen at the start of the year.

The British economy lost nearly a quarter of its output at the height of the lockdown in spring, when many sectors were closed and those people still working were encouraged to do so from home. Since May, when lockdown measures were eased, the economy has grown for four months, recovering much of the output lost. However, at the end of August the economy was still 9.2% smaller than before the pandemic.

Give us a week: Businesses urge clarity on England lockdown

Bank of England increases stimulus by more than expected