The Lakers’ Anthony Davis and Miami’s Jae Crowder both ended up on the floor midway through the third quarter of Game 5 of the NBA Finals. As Davis scrambled to get back to his feet, his right elbow swung out toward Crowder’s face.

The moment epitomized how Friday went: The Los Angeles Lakers, even when they got within a few seconds of winning a championship, couldn’t knock out the Miami Heat. LeBron James was brilliant for the Lakers with 40 points, Jimmy Butler was as brilliant if not more so for the Heat with a 35-point triple double, and Miami survived to send the title series to Game 6 on Sunday. 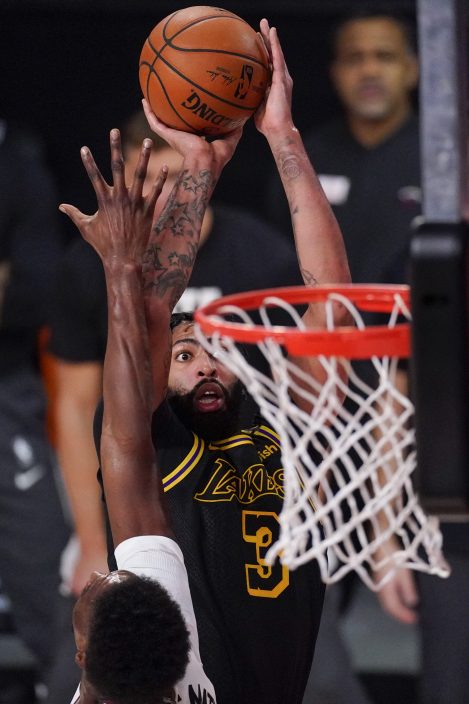 “We ain’t backing down,” Butler said. “We ain’t shying away.”

Everything still favors the Lakers. They lead the series 3-2. James hasn’t been part of losing two potential close-out games in the same series since 2006, his first postseason year. The Heat still don’t have starting point guard Goran Dragic because of a foot injury, a torn left plantar fascia.

They are most undeterred.

“Everybody counted us out since the beginning of the playoffs," Heat rookie guard Tyler Herro said. “We don’t really care what people have to say."

Miami kept finding ways in Game 5 to keep the series — and its season — alive, then caught a break in the final seconds when the Lakers’ Danny Green missed a wide-open 3 that could have delivered the NBA title and Markieff Morris threw the ball away after the offensive rebound.

The Heat have talked since the NBA Finals started about a need to play almost perfect basketball against the Lakers. And now James, who has spoken with great respect for his former franchise throughout the series, indicated that the Lakers might be feeling a similar way.

“One thing about this team that we are playing, they make you pay for every mistake,” James said after Game 5. “It’s the same as when I was playing against Golden State all those years, you make a mistake, they make you pay. So, we have to understand that.”

James is about to set the record for NBA playoff game appearances. He’s already the leading scorer in playoff history. Has the most wins. The most steals. Most shot attempts. Most free throws taken.

Here’s a record he didn’t want.

For as great as he is, James still needs help. Nobody has had more 40-point NBA Finals games in a loss than he has — the record-setting fifth entry on that list coming Friday in Miami’s 111-108 win. In fact, James’ last three 40-point finals efforts, two against the Warriors in 2017 and 2018 and now the one against Miami in Game 5, all ended up as losses.

“He steps up in big moments,” Lakers guard Alex Caruso said. “It’s unfortunate that we couldn’t make one more play for him either defensively or offensively to help him out, because he was giving it his all.”

His all wasn’t enough.

The Lakers have a clear big two in James and Davis, who combined for 68 points. The Lakers had been 14-1 when they each scored 28 or more in the same game; 5-0 when they combined for at least 68 points. The Heat staved them off by playing seven players and getting balance; Butler had a 35-point triple-double to lead the way, five of the other six scored in double figures led by Duncan Robinson’s 26.

For his four years in Miami, James helped make the Heat better.

He’s doing the same now — with the Heat knowing it’ll take everything to claim this championship.

“Well, we have a goal: We’re fighting for a title,” Heat coach Erik Spoelstra said. “That’s what it’s going to require and our guys have an understanding. Through the first two games of this series we realized, ‘All right, this is a different level, we’re going to have to get to a higher level.’ Our guys are extremely competitive, so this level of play that the Lakers have brought is bringing out something different.”

The Lakers had a three-point lead midway through the final quarter of Game 5 and let it get away. They led by one after a basket by Davis with 21.8 seconds left and were one stop from winning the title; Davis ended up fouling Butler, a call the Lakers said shouldn’t have been made. The NBA disagreed Saturday, saying Butler was fouled on the play.