NEW DELHI — India’s confirmed coronavirus toll has crossed 7 million with a number of new cases dipping in recent weeks, even as health experts warn of mask and distancing fatigue setting in.

The Health Ministry on Sunday registered another 74,383 infections in the past 24 hours. India is expected to become the pandemic’s worst-hit country in coming weeks, surpassing the U.S., where more than 7.7 million infections have been reported.

The ministry also reported 918 additional deaths, taking total fatalities to at least 108,334. Experts say all reported numbers seriously understate the impact of the pandemic, due to limited testing, missed cases and in some instances, concealment by authorities. 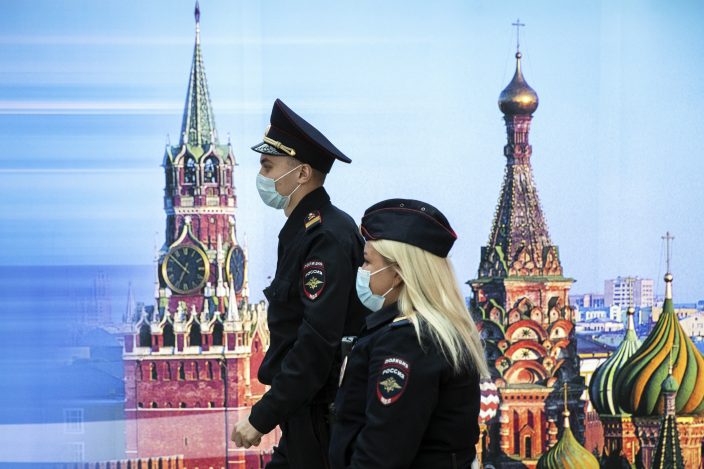 India, which has nearly 1.4 billion people, saw a steep rise in cases in July and added more than 2 million in August and another 3 million in September. But it is seeing a slower pace of coronavirus spread since mid-September, when the daily infections touched a record high of 97,894. 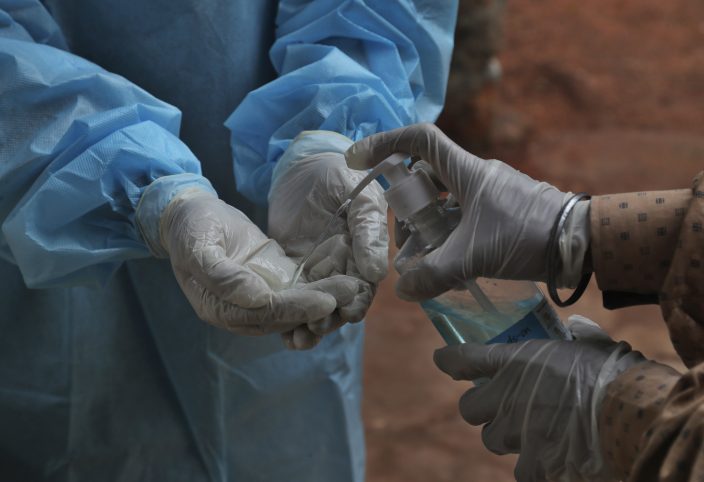 A health worker cleans her hands with sanitizer after taking a nasal swab sample from a patient at a COVID-19 testing center in Hyderabad, India, Sunday, Oct. 11, 2020. India's confirmed coronavirus toll crossed 7 million on Sunday with a number of new cases dipping in recent weeks, even as health experts warn of mask and distancing fatigue setting in. (AP PhotoMahesh Kumar A.)

— As a second wave of coronavirus infections hit the continent, European nations seem not to have learned their lessons from the first wave 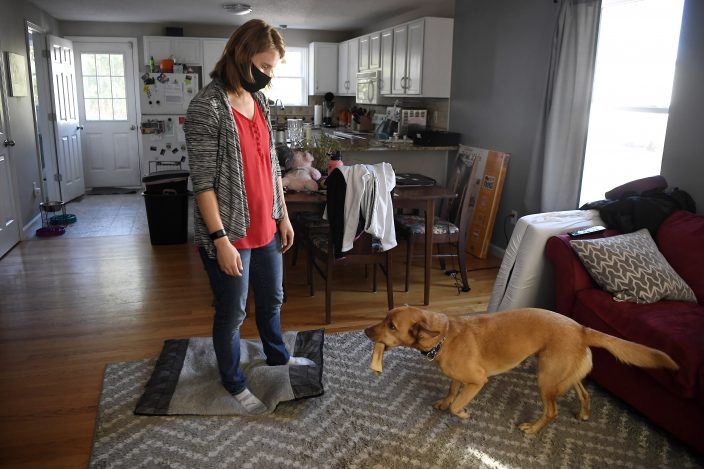 Melissa Wilhelm Szymanski gives her dog Cooper a bone at home in Glastonbury, Conn., on Saturday, Sept. 19, 2020. Wilhelm Szymanski got sick earlier this year and wound up with a $3,200 bill because she wasn't diagnosed initially with COVID-19. Even though dozens of insurers and the federal government are offering to pick up all treatment costs during the pandemic, many holes remain for big bills to surprise patients. (AP PhotoJessica Hill)

— House Speaker Nancy Pelosi dismisses the latest White House offer in COVID-19 aid talks but remains hopeful progress can be made toward a deal. 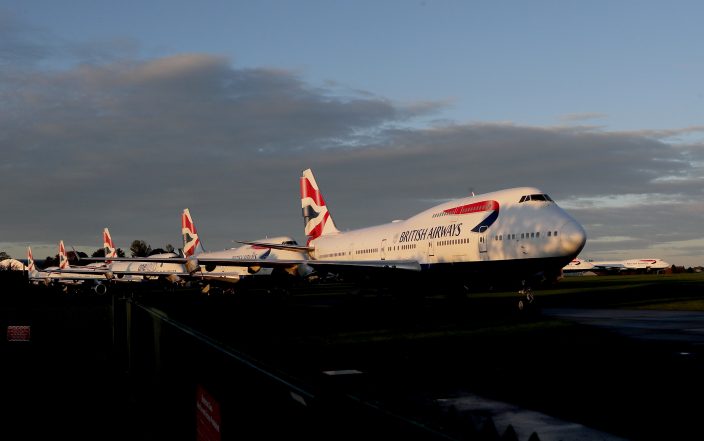 Retired British Airways Boeing 747-400 parked at Cotsworld Airport in Kemble, England, Sunday, Oct. 11, 2020. The retirement of the Jumbo Jet fleet was brought forward as a result of the impact the COVID-19 pandemic had on the airline and the aviation sector. (AP PhotoFrank Augstein)

WASHINGTON — The White House doctor says President Donald Trump was no longer at risk of transmitting the coronavirus but did not say explicitly whether Trump had tested negative for it. The diagnosis came as the president prepared to resume campaign rallies and other activities. 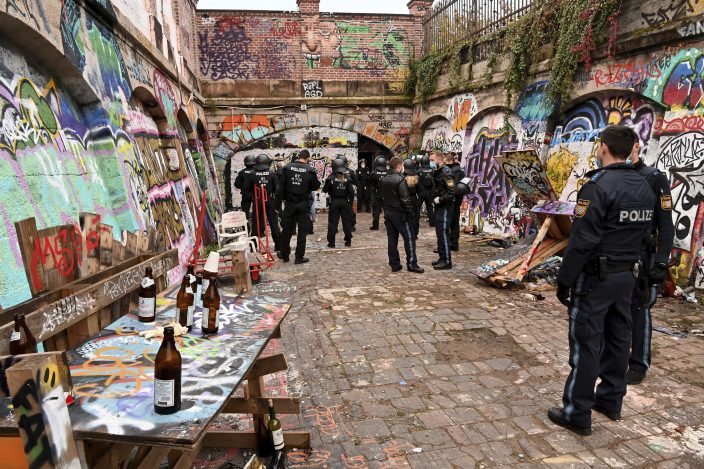 Police officers stand on the area of the Munich slaughterhouse after an illegal rave party at the location in Munich Germany, Sunday, Oct. 11, 2020. The police ended the illegal party because the participants violated corona measures in the region. (Peter Kneffeldpa via AP)

In a memo released Saturday night by the White House, Navy Cmdr. Dr. Sean Conley said Trump met the Centers for Disease Control and Prevention criteria for safely discontinuing isolation and that by “currently recognized standards” he was no longer considered a transmission risk.

The memo did not declare Trump had tested negative for the virus. But sensitive lab tests — like the PCR test cited in the doctor’s statements — detect virus in swab samples taken from the nose and throat. Dr. William Morice, who oversees laboratories at the Mayo Clinic, said earlier this week that using the PCR tests, the president’s medical team could hypothetically measure and track the amount of virus in samples over time and watch the viral load go down.

Some medical experts had been skeptical that Trump could be declared free of the risk of transmitting the virus so early in the course of his illness. Just 10 days since an initial diagnosis of infection, there was no way to know for certain that someone was no longer contagious, they said. 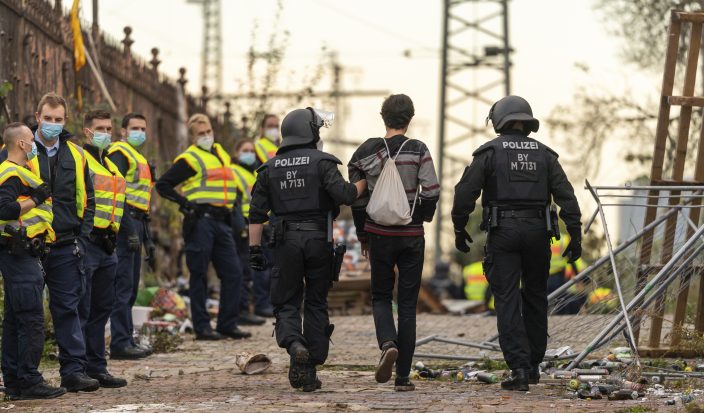 Health Minister Park Neung-hoo told reporters Sunday that South Korea has counted an average of 59.4 new cases each day in the past two weeks, compared with 91.5 cases in the earlier two weeks. Earlier Sunday, South Korea reported 58 new cases, taking the country’s total to 24,606 including 432 deaths.

Under relaxed distancing guidelines effective Monday, Park says some high-risk facilities like nightclubs and karaoke bars will be allowed to reopen but they’re required to follow anti-virus steps like wearing masks and keeping a list of clients.

Park says South Korea will lift a ban on the gatherings of more than 50 people indoor and more than 100 outdoor. He says community welfare centers will also be reopened while professional sports leagues can have a limited number of fans back, up to 30% of the stadium capacity. 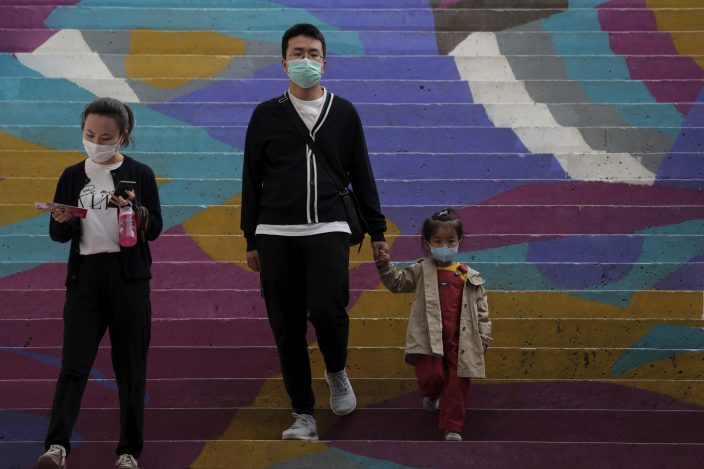 A family wearing face masks to help curb the spread of the coronavirus walk down a colourful staircase at a shopping mall in Beijing, Sunday, Oct. 11, 2020. Even though the spread of COVID-19 has been all but eradicated in China, the pandemic is still surging across the globe with ever rising death toll. (AP PhotoAndy Wong)

SYDNEY — The premier of Australia’s Victoria state is stepping up his fight with members of the public who don’t comply with pandemic regulations, saying close contacts of those infected who refuse a test will have to spend 21 days in quarantine.

The state government has announced mandatory quarantine will be extended by 10 days for close contacts if they decide not to be tested on the 11th day of isolation. The change takes effect at midnight Sunday.

Victoria Premier Daniel Andrews said a “very, very high percentage” of people had submitted to testing but the rule was designed to provide authorities with an even more complete picture.

“This is just double-checking, triple-checking that you haven’t, in fact, still got the virus,” he said.

Victoria reported one more death and 12 new cases on Sunday, taking Victoria’s death count from the virus to 810 and the national toll to 898.

The Brazilian Health Ministry reported that the death toll now stands at 150,198. The figure is the world’s second highest behind the United States, according to the tally maintained by Johns Hopkins University.

Brazil’s far-right President Jair Bolsonaro has played down the severity of the virus while deaths mounted rapidly in Brazil. The 65-year-old president flouted social distancing at lively demonstrations and encouraged crowds during outings from the presidential residence. He has rejected governors’ and mayors’ lockdowns and other tough measures to contain the virus’ spread, even after he contracted it himself in July.

But there have been recent signs of relief in Brazil. Over the last month and a half, the viral curve has dropped. The average number of deaths sat at 598 over the last 7 days, the lowest level since the beginning of May.

ANCHORAGE, Alaska — Anchorage public health officials say they are investigating a coronavirus outbreak from a youth hockey tournament that drew teams from around Alaska.

Officials say more than 300 players, coaches and fans were in attendance at the Termination Dust Invitational over a three-day period last weekend. Teams came from nine cities across the state.

Local health officials did not provide specific numbers as to how many people tested positive as a result of the event. But, tournament organizers say they first learned of a positive case in one of the teams on Monday. They also say they knew of two teams with a positive case each.

The Missouri Department of Health and Senior Services said there have been a total of 144,230 confirmed cases since the outbreak started, up 5,066 cases from Friday. The state also reported 27 more deaths to bring the total to 2,422.

The new number more than doubles the previous single-day high of 2,084 new cases, which occurred on July 30.

Data from the state shows that 1,313 people were hospitalized as of Friday, the second-most for any single day. The rise in hospitalizations is occurring largely in Missouri’s rural communities.

Dr. Nathan Sprengel, a doctor at the SEMO Health Network clinic in New Madrid, said some patients get upset when they are urged to wear masks in the clinic.

PHOENIX -- A new report by the Centers for Disease Control and Prevention says coronavirus cases in Arizona dropped 75% following the implementation of mask mandates.

The mandates were enacted after a statewide stay-at-home order was lifted, which resulted in a sharp uptick of cases.

The report was authored with the Arizona Department of Health Services. Arizona’s stay-at-home order expired on May 15 and two weeks later the daily average number of coronavirus cases climbed 151%. The substantial spike in cases overwhelmed the state’s health care system. The number of virus cases in Arizona peaked between June 29 and July 2 and declined by approximately 75% between July 13 and Aug. 7.

AUSTIN, Texas — Protesters from Republican Texas Gov. Greg Abbott’s own party have gathered outside his home to criticize his coronavirus orders as overbearing and unlawful.

COVID-19 has killed more than 16,500 people in Texas, according to the state’s official count, and is closing in on 800,000 confirmed cases since the pandemic started.

Earlier this week, Abbott lifted his shutdown order on bars that has been in place since June, though he gave county leaders control to keep them closed locally.

WASHINGTON — President Donald Trump spoke from a balcony in his first public appearance since returning to the White House after being treated for the coronavirus.

The president addressed a large crowd on the South Lawn despite the White House refusing to declare whether he is no longer contagious and against the guidance of public health officials.

Trump delivered an address on his support for law enforcement from the Blue Room balcony to a friendly crowd. Most in the crowd wore masks, but there was little social distancing.

The president had not been seen in public — other than in White House-produced videos — since his return five days ago from the military hospital where he received experimental treatments for the coronavirus.

ROME – Italy was the site of two anti-mask protests on Saturday, even as the country undergoes a resurgence of coronavirus infections.

The Health Ministry reported another 5,724 cases in the last 24 hours and 29 deaths. Most cases were asymptomatic and determined through increased testing — more than 133,000 in the period.

Protesters at one of the demonstrations complained about measures they call harsh, including a new order for all Italians to wear masks outdoors or face fines of up to 1,000 euros ($1,200). Most of the new cases are in Lombardy in the north, which tallied 1,140 new infections, followed by Campania, which includes Naples, and Veneto.

In front of the Duomo Cathedral In Milan, entertainment workers protested the government’s economic policies to combat the spread of the coronavirus.

BUCHAREST, Romania — Several hundred Romanians gathered in Bucharest on Saturday to protest coronavirus restrictions, despite a sharp spike in cases.

The protesters, all without mandatory masks, briefly scuffled with police as officers attempted to prevent them from erecting a makeshift stage in the University Square in the nation’s capital.

The protest came at the end of the week with the highest daily infections and deaths in Romania since the pandemic hit the country in February. The relatively small crowd was comprised mainly of Orthodox Christian and right-wing nationalists.

Many protesters shouted anti-Muslim slurs against the head of the country’s emergency services, who is of Palestinian descent. They also chanted “down with the masks” and “freedom.”

Some 85 percent of Romanians identify as Orthodox Christians.