Roland Garros organizers say they've not made a profit from this year's pandemic-hit edition of the French Open that was pushed back from spring to autumn, deprived of 97% of its ticket sales and most of its spectators and is wrapping Sunday with the men's final of Novak Djokovic vs. Rafael Nadal. 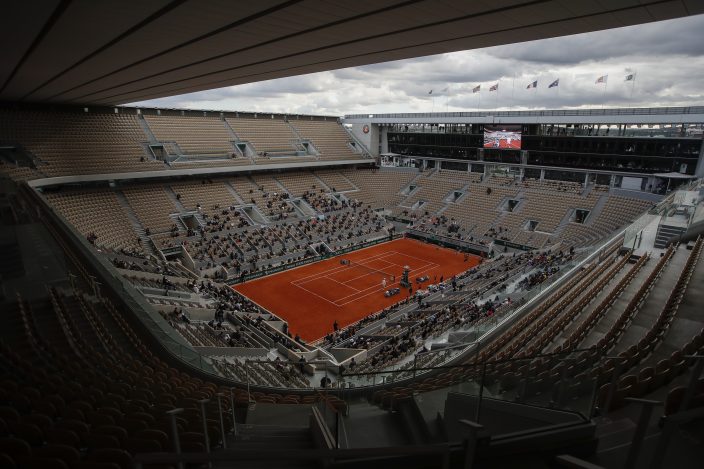 View of center court Philippe Chatrier where Poland's Iga Swiatek waits for Sofia Kenin of the U.S. to return from medical treatment in the final match of the French Open tennis tournament at the Roland Garros stadium in Paris, France, Saturday, Oct. 10, 2020. (AP PhotoAlessandra Tarantino)

As for next year, organizers are still planning to restore the Grand Slam clay-court tournament to its usual May-June slot but admit they have no visibility on whether the pandemic will allow that to happen.

“We have no crystal ball,” said Bernard Giudicelli, the French tennis federation president. "We are advancing into the unknown.”

Organizers said that staging this year's September-October edition in the midst of the pandemic, with only 1,000 spectators allowed per day and just 3% of the usual amount of tickets sold, caused a hit of 80 million to 100 million euros ($95 million to $118 million) to the tournament's revenues and left it earning about what it cost to hold.

Giudicelli insisted that holding the tournament in such conditions was still a “winning” choice and that it would have been “unthinkable” for 2020 to have passed without a French Open.

The Latest: Gauff, Krejcikova face off for SF spot in Paris

The Latest: Russia's Rublev into French Open 4th round