French Open champion Iga Swiatek joined the Top 20 for the first time Monday by rising 37 spots in the WTA rankings to a career-best No. 17.

Rafael Nadal’s 6-0, 6-2, 7-5 victory over Novak Djokovic on Sunday for a 13th championship at Roland Garros and 20th Grand Slam trophy in all — tying Roger Federer’s record for men — did not change the top of the ATP rankings.

Djokovic, who won the Australian Open in February for his 17th major title, is still No. 1, with Nadal at No. 2, followed by U.S. Open champion Dominic Thiem and Federer. 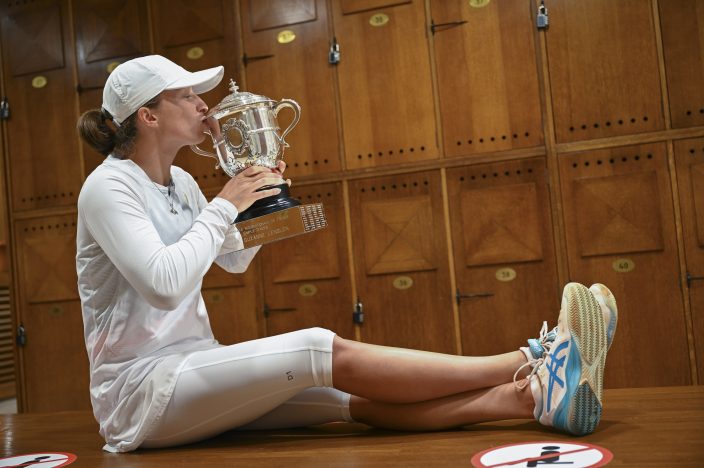 In this Saturday, Oct. 10, 2020 image provided by the French Tennis Federation FFT, Poland's Iga Swiatek poses with the trophy in the locker room after winning the final match of the French Open tennis tournament against Sofia Kenin of the U.S. in two sets, 6-4, 6-1, at the Roland Garros stadium in Paris, France. (FFTCorinne Dubreuil via AP)

The 19-year-old Swiatek entered the French Open at No. 54 and became the lowest-ranked female champion at the clay-court Grand Slam tournament since the WTA computer rankings began in 1975.

Her 6-4, 6-1 victory over Sofia Kenin on Saturday gave Swiatek the first tour-level title of any sort in her professional career and made her Poland’s first Grand Slam singles champion.

Kenin’s run to the final — the first time she made it to the quarterfinals on clay anywhere — allowed her to move up two places to No. 4, matching her career high. The 21-year-old American went 16-2 in Grand Slam matches in 2020, winning her first such trophy at the Australian Open in February. 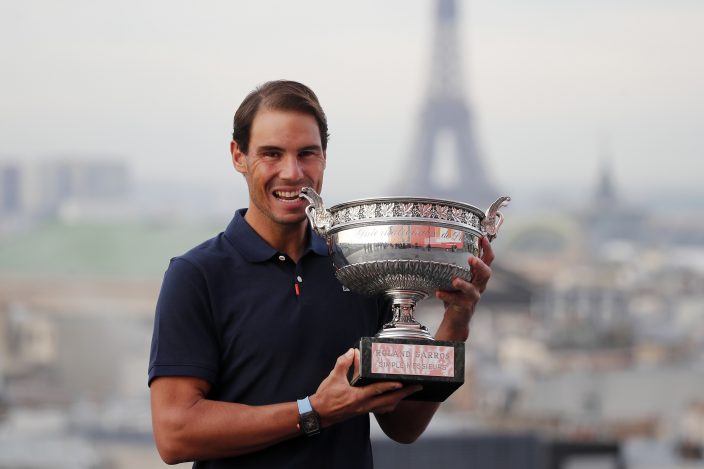 Spain's Rafael Nadal poses with his trophy during a photo call on the rooftop of Galeries Lafayette, Monday, Oct. 12, 2020, after winning the final match of the French Open tennis tournament against Serbia's Novak Djokovic in three sets, 6-0, 6-2, 7-5 at the Roland Garros stadium. (AP PhotoFrancois Mori)

The top three in the women’s rankings remained as they were before the French Open, with Ash Barty at No. 1, Simona Halep at No. 2, and Naomi Osaka at No. 3. Serena Williams is No. 10.

When competition resumed in August after a hiatus of about five months because of the coronavirus pandemic, the tours decided to allow players to use either their 2019 or 2020 results at any given tournament for rankings purposes, so Barty wasn’t hurt by sitting out the French Open a year after winning it.

Osaka also sat out the trip to Paris this time, opting to rest and recover after her championship at the U.S. Open last month.

Halep did compete at the French Open, but her 6-1, 6-2 loss to Swiatek in the fourth round didn’t affect the three-time major champion’s ranking.

In the ATP, Argentina's Diego Schwartzman, who reached his first Grand Slam semifinal before losing to Nadal, cracked the Top 10 for the first time, jumping to No. 8 from No. 14.

Russia's Andrey Rublev also made his Top 10 debut Monday, using a second consecutive major quarterfinal appearance to go to No. 10 from No. 12.

The biggest mover in the men’s Top 100 was Jannik Sinner, whose quarterfinal showing — he was beaten by Nadal — pushed the 19-year-old Italian up 29 places to No. 46 from No. 75.