Stylistically, there are issues. A running game that seems to be all or nothing. A secondary that hasn't been nearly as consistent as it was in 2019. A defense that seemed to have a strange aversion to getting off the field on third down.

And an early schedule littered with teams either rebuilding or underachieving or both.

Yet Mike Tomlin doesn't get caught up in style points. All the Pittsburgh Steelers coach knows is his team is undefeated through four games for the first time in 41 years after a 38-29 victory over Philadelphia on Sunday. Pittsburgh Steelers quarterback Ben Roethlisberger (7) throws a pass during the second half of an NFL football game against the Philadelphia Eagles in Pittsburgh, Sunday, Oct. 11, 2020. (AP PhotoDon Wright)

“It wasn't a perfect performance by any stretch,” Tomlin said. “But we're not looking for perfect. We're looking to be good enough to win.”

That's something that hasn't always been the case for Pittsburgh during the opening quarter of the season in Tomlin's highly successful tenure. The Steelers have frequently stubbed their toe in September and early October during his 13-plus years on the job.

In 2017, a team that finished 13-3 fell on the road in Week 3 to a Bears club that went 5-11. In 2016, a group that captured 11 games and reached the AFC championship was blown out in Week 3 by an Eagles team that wound up 7-9 under first-year head coach Doug Pederson and rookie quarterback Carson Wentz. In 2014, the eventual AFC North champions were stunned at home in Week 4 by a Tampa Bay team that earned the No. 1 pick in the 2015 draft after going 2-14. 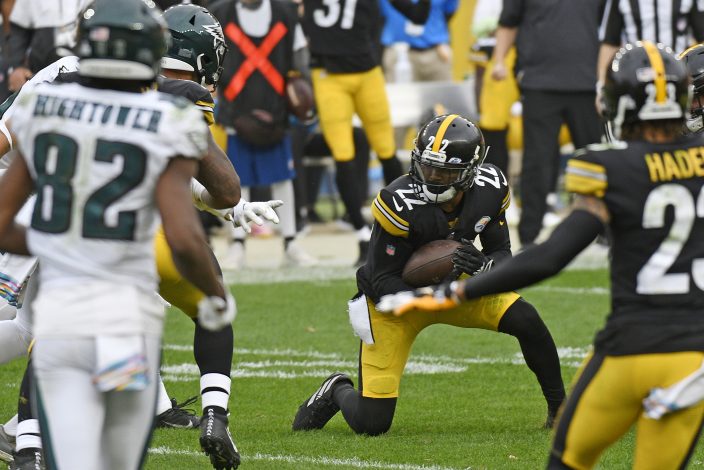 Tomlin likes to describe the momentum of each season as a “moving train." Typically Pittsburgh takes its time getting it together. Not so much in 2020. Sure, the combined record of the four teams they've played so far is 3-15-1. Given their track record of occasionally spotty work against seemingly overmatched opponents, they'll take it.

So forgive cornerback Steven Nelson if he isn't losing sleep over how the secondary has looked vulnerable, including a curious performance against an undermanned Philadelphia wide receiving corps missing DeSean Jackson and Alshon Jeffery. Travis Fulgham caught 10 passes for 152 yards and the Eagles converted 10 straight third downs at one point to rally from 17 points in the third quarter to nearly steal it late.

“We'll clean it up,” said Nelson, who picked off Wentz twice, including a desperation heave in the final minutes to seal it. “We got the win, that's all that matters.” 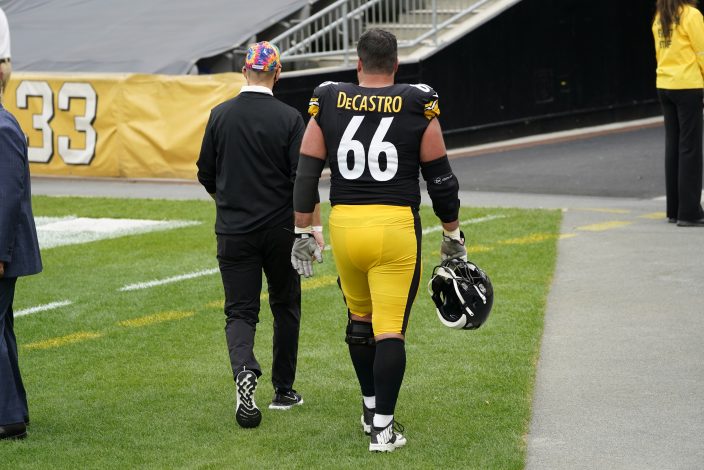 Pittsburgh Steelers offensive guard David DeCastro (66) walks off the field during the first half of an NFL football game against the Philadelphia Eagles, Sunday, Oct. 11, 2020, in Pittsburgh. (AP PhotoKeith Srakocic)

The task figures to get tougher starting next Sunday when the surging — yes, surging — Cleveland Browns (4-1) visit. Pittsburgh's next four games are against competition that is a combined 13-5. The Steelers' strong start has given them a little wiggle room in case they stumble a bit down the line.

First-year quarterbacks coach Matt Canada's influence has been noticeable. When he's not helping Ben Roethlisberger with his footwork or developing Roethlisberger's three backups, he's kicking around concepts with offensive coordinator Randy Fichtner. The little tweaks. including increased use of jet sweeps, end-arounds and unbalanced offensive sets, kept Philadelphia's aggressive front seven off-balance and allowed Roethlisberger to throw 34 passes while getting sacked once. The Steelers also put up over 30 points for the first time since 2018 and have topped 26 points or more in each of their first four games for the first time in franchise history. 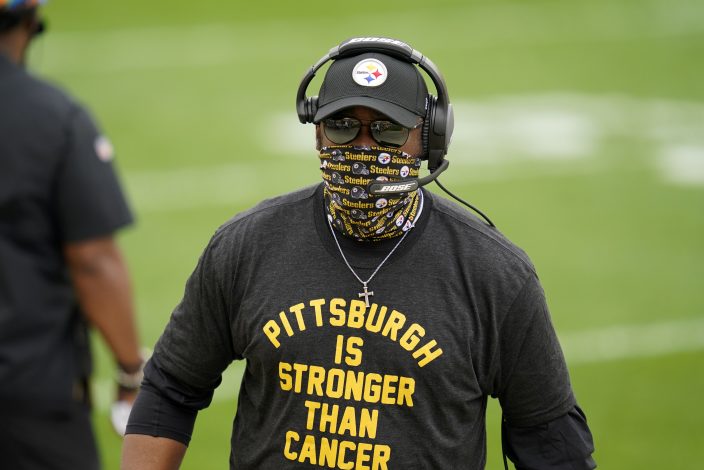 Pittsburgh Steelers head coach Mike Tomlin walks the sideline during the first half of an NFL football game against the Philadelphia Eagles, Sunday, Oct. 11, 2020, in Pittsburgh. (AP PhotoKeith Srakocic)

On the surface, the running game looks like it's doing fine. The Steelers have topped 100 yards each week but it's been largely hit and miss. Benny Snell Jr. had runs of 30 and 21 yards to top the century mark in the opener. James Conner needed a late 59-yarder to edge over 100 in Week 2. The leading rusher against the Eagles wasn't Conner or Snell but wide receiver Ray-Ray McLoud, who picked up 63 yards on a couple of reverses. 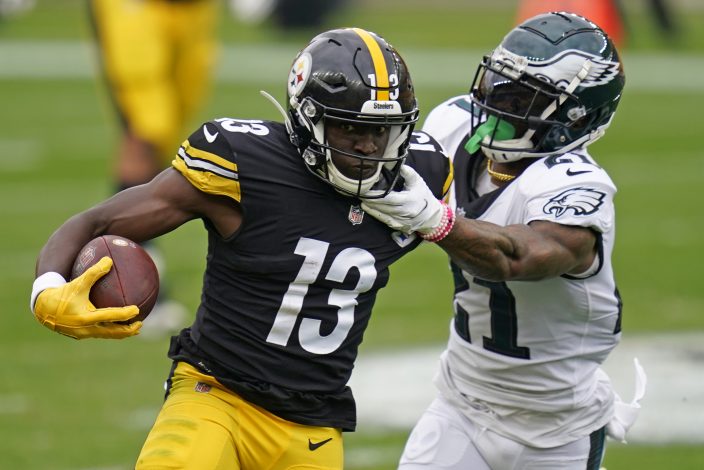 Speaking of McLoud, the former Buffalo Bill was signed a week into camp to help bolster the return game. The team's confidence in him, however, has grown with each passing week. Forced into action when Diontae Johnson went down in the first quarter Sunday, he caught all three passes Roethlisberger tossed his way and finished with 123 all-purpose yards.

Yes, the defense sacked Wentz five times to extend its streak of games with at least one sack to 61, fourth longest ever. Still, when the pass rusher couldn't get to Wentz, there were coverage issues that helped Philadelphia stick around in a game it had no business sticking around in. 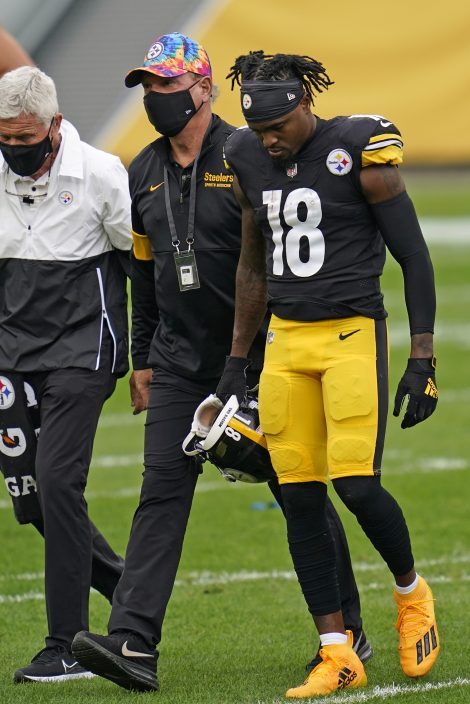 Pittsburgh Steelers wide receiver Diontae Johnson (18) walks off the field after being injured during the first half of an NFL football game, Sunday, Oct. 11, 2020, in Pittsburgh. (AP PhotoKeith Srakocic)

3 — Number of rookie wide receivers in NFL history to score four touchdowns in a single game after second-round pick Chase Claypool found the end zone four times against the Eagles.

The Steelers will try to extend their 16-game winning streak at Heinz Field against the Browns next Sunday when Cleveland makes its annual visit. The longtime rivals split their two meetings last season.