When Brian Burns stripped Matt Ryan of the football, Juston Burris found himself with an open lane to the end zone.

All the safety had to do was scoop and score.

But Burris bundled his attempt to pick up the ball, failing to get his hands underneath it, and the Falcons recovered. Burris was emotionally down after the play until he walked to the sideline and dozens of teammates told him, “Don’t worry about it. You’re going to make another play. Get over it.’” 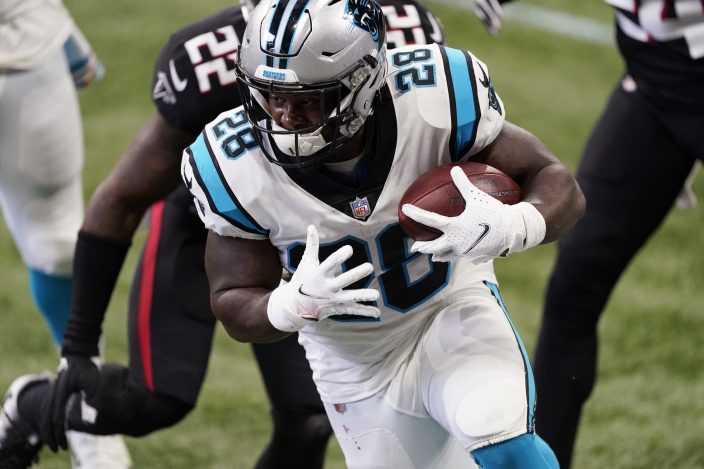 Carolina Panthers running back Mike Davis (28) runs against the Atlanta Falcons during the first half of an NFL football game, Sunday, Oct. 11, 2020, in Atlanta. (AP PhotoJohn Bazemore)

Burris did just that, turning in the play of the game in the fourth quarter when he intercepted Ryan in the end zone to help preserve Carolina’s 23-16 win.

“He even told us in the locker room (at halftime) it was his fault, he’s going to make a play, he’s going to get a pick,” linebacker Shaq Thompson said. “And you know what? He stepped up big for us and he was a man of his word. We trusted him and he got us a stop in the red zone.”

Thompson said the two plays are indicative of the bond and trust the Panthers have created over the past three weeks, propelling the team into a first-place tie in the NFC South with Tampa Bay after an 0-2 start. 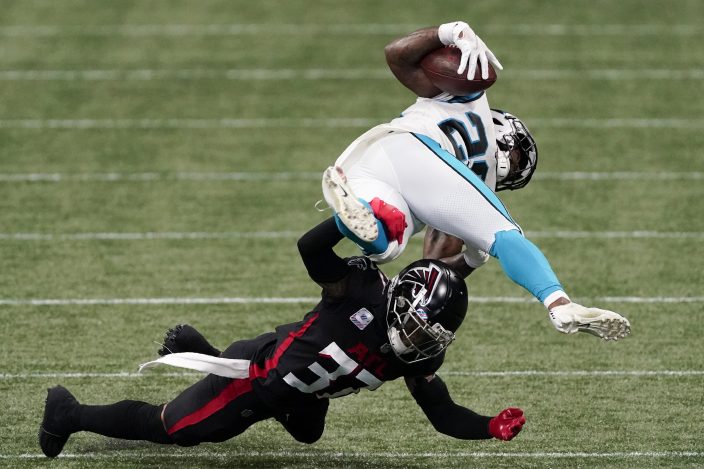 There is no doubt the intensity has picked up on defense, and guys are flying to the football. After giving up 67 points in their first two games, the Panthers have allowed 53 in the last three.

“The team is coming together,” Thompson said. “We’re brothers playing for each other.”

Burris agreed, saying that is because of the culture created by head coach Matt Rhule and defensive coordinator Phil Snow. 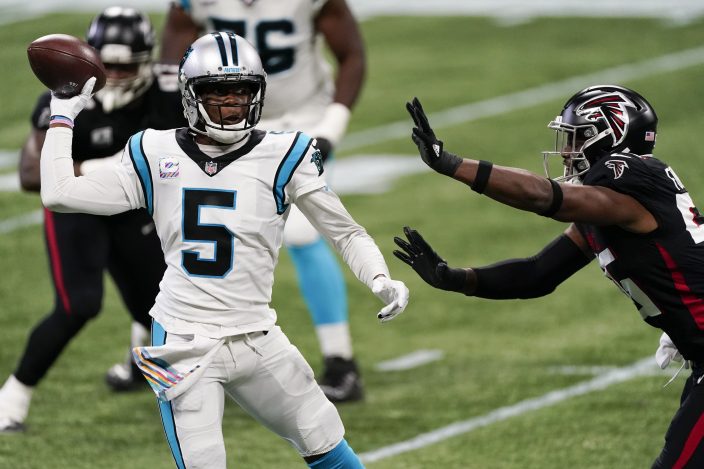 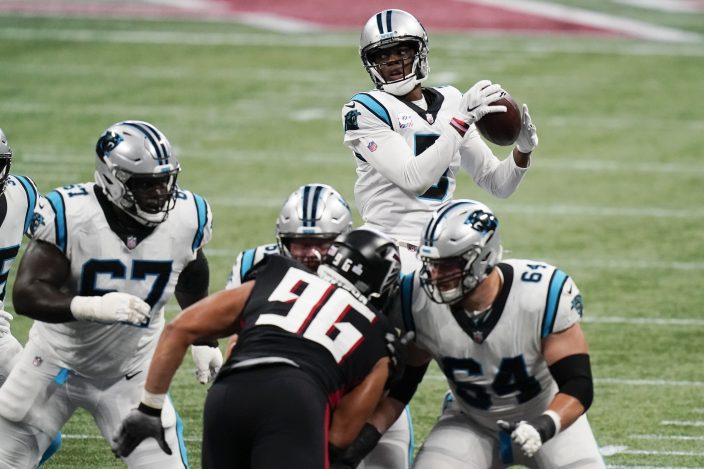 Carolina Panthers quarterback Teddy Bridgewater (5) works in the pocket against the Atlanta Falcons during the first half of an NFL football game, Sunday, Oct. 11, 2020, in Atlanta. (AP PhotoBrynn Anderson)

Robby Anderson might just be the best free agent pickup in the league. The former Jets wide receiver has at least 99 yards receiving in four of the team's five games this season. He's third in the NFL in receptions (36) and yards receiving (469) and has developed a remarkable chemistry with new teammate Teddy Bridgewater.

The Panthers need to continue to find more ways to get the ball into the hands of versatile and explosive wide receiver Curtis Samuel. Samuel had four runs for 28 yards, including a 17-yard burst while lining up in the backfield. He also made some nice grabs on third downs to move the chains and finished with 36 yards receiving while catching all five balls thrown his way. 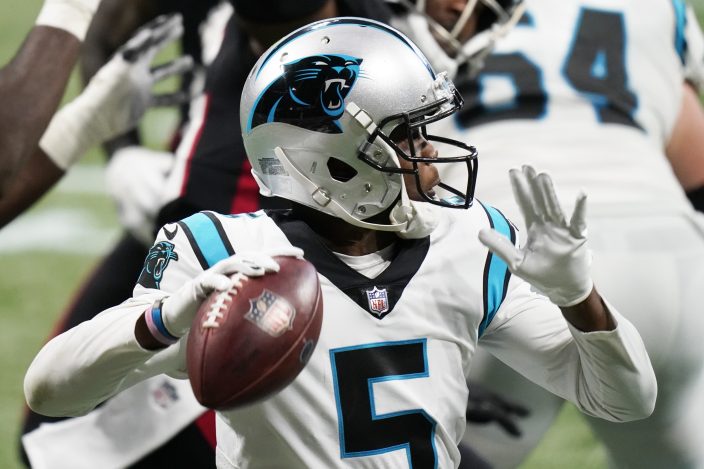 Carolina Panthers quarterback Teddy Bridgewater (5) works against the Atlanta Falcons during the first half of an NFL football game, Sunday, Oct. 11, 2020, in Atlanta. (AP PhotoBrynn Anderson)

Mike Davis has been outstanding filling in for Christian McCaffrey at running back. In three starts, Davis has 351 yards from scrimmage and three touchdowns. He helped the Panthers put together a 7 1/2-minute drive in the fourth quarter that led to a clinching field goal. Davis had big runs of 15, 8 and 9 yards on the final drive to bury the Falcons. “He’s running it with tremendous physicality,” coach Matt Rhule said. “He’s not getting tackled by the first tackler." 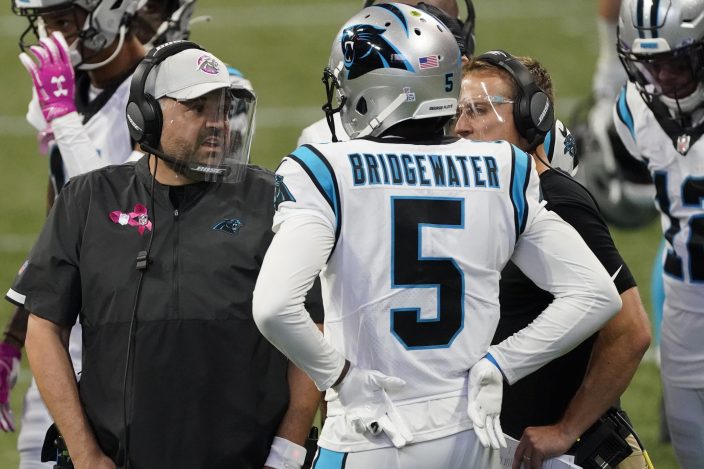 Run defense will be a big emphasis for the Panthers this week after allowing Todd Gurley and the Falcons to pile up 166 yards and a touchdown on the ground. The biggest blow came on a 35-yard touchdown run by Gurley on the game's first possession. However, the Panthers were able to make adjustments after that first drive and hold the Falcons out of the end zone for the remainder of the game. Still, Gurley averaged 8.6 yards per carry.

73% — Percentage of passes Bridgewater has completed this season, second most in the league behind only Las Vegas' Derek Carr. Carolina's strategy of getting the ball out quickly is working well as Bridgewater has been sacked eight times this season. 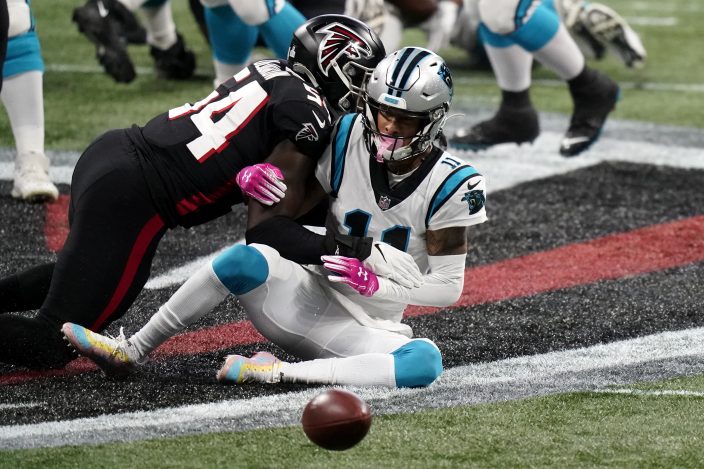 The Panthers will look for their fourth straight win Sunday against the Bears, but getting a push rush on quarterback Nick Foles could be a concern with three banged-up linemen. Stay tuned on the Panthers' injury front.

The Arizona Diamondbacks set a maj ...