“I don’t care about the rest of the league. I care about the Philadelphia Eagles,” Pederson said Monday. “Our division, what are we, still a half-game back? Look, it is what it is. I’m going to pull out my inner Bill Belichick and say I’m focused on Baltimore.”

Pederson beat Belichick and the Patriots to win Philadelphia’s only Super Bowl title three years ago. 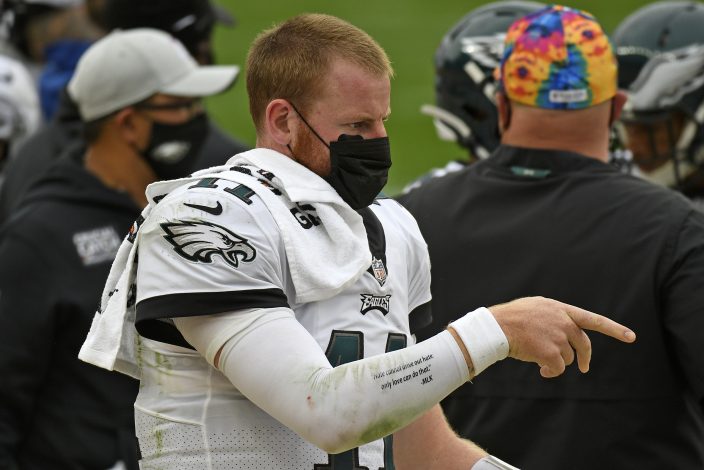 Philadelphia Eagles quarterback Carson Wentz (11) walks on the sideline during the second half of an NFL football game against the Pittsburgh Steelers in Pittsburgh, Sunday, Oct. 11, 2020. (AP PhotoDon Wright)

The Eagles host the Ravens (4-1) after losing 38-29 at Pittsburgh on Sunday. The good news is the NFC East is weak and winnable. The Dallas Cowboys (2-3) lead the division but lost quarterback Dak Prescott to a season-ending ankle injury and have struggled every week.

“My heart goes out to Dak and obviously his family,” Pederson said. “You never want to see anybody, whether it be on your own team or even a rival or anybody in the league, suffer these types of injuries. We know that this game is hard enough. Injuries are a part of the game. But these types of injuries, where he could miss the remainder of the season, multiple weeks for sure, it’s terrible.” 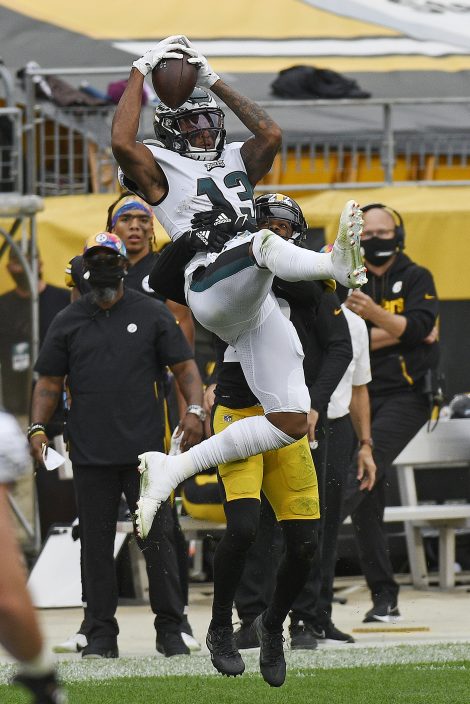 Carson Wentz to Travis Fulgham has turned into Philadelphia’s best option in the air. Fulgham had 10 catches for 152 yards and one touchdown against the Steelers. Nine of Fulgham’s 10 catches resulted in first downs, including five on third downs.

“I’m just trying to do what I can. If Carson throws me the ball, just come down with it and make the play,” Fulgham said. “Unfortunately, it wasn’t enough to get the win, but we’ll keep building on it. Carson’s a great quarterback. He’s putting the ball on the money and I’m just coming up with the play.”

Fulgham is so confident he thought he should’ve made the play on a third-and-5 pass late in the game that fell incomplete. Steelers cornerback Joe Haden knocked the ball away, making contact that warranted a penalty. 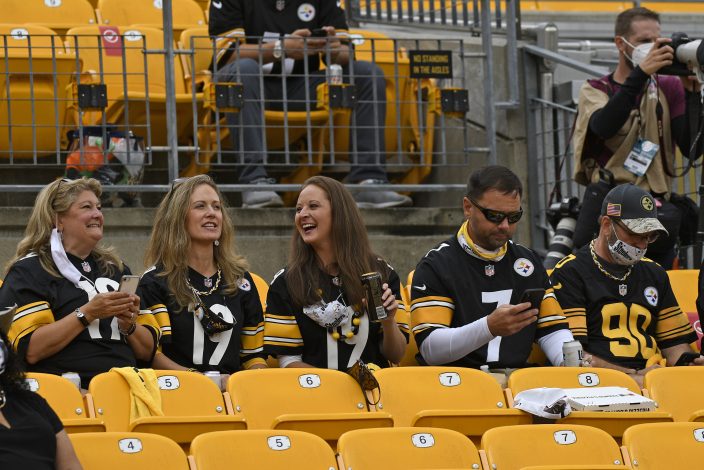 “I absolutely should have made that play,” Fulgham said. “That’s on me. I should have come up with that play to continue the drive and hopefully give the team the win.”

The Eagles have been tough against most running backs but they’ve struggled to stop the run when other players are carrying it. They’ve allowed 125 yards rushing on nine carries by wide receivers or tight ends the past two games for an average of 13.9 per carry.

Fulgham has been cut four times by three teams since Detroit selected him in the sixth round of the 2019 draft. He was waived by Green Bay in August and the Eagles in September. He was elevated from the practice squad on Oct. 3, made his first two career receptions last week at San Francisco, including a 45-yard TD for the go-ahead score. Now, he’s Philadelphia’s best receiver and Wentz’s only reliable target.

“He’s a beast,” Wentz said. “I mean he showed up (Sunday) and showed really last week that the two big plays he had, they weren’t a fluke. Kid’s a baller. He made a lot of big plays. I was really proud of him and pumped for him.”

Rookie wide receiver John Hightower couldn’t make the catch in the back of the end zone on a perfect 49-yard pass from Wentz that sailed right through his hands. Earlier in the drive, he wasted time trying to get extra yards instead of going out of bounds following a 9-yard catch, and that forced the Eagles to use a timeout. They ended up running out of time at the Steelers 12 and couldn’t try a field goal.

Right tackle Lane Johnson was carted off the field because of an ankle injury that’s troubled him throughout the season. Johnson had surgery on the ankle during training camp. Pederson said the team is waiting on a second opinion. ... Cornerback Darius Slay is in concussion protocol.

73% — The defense allowed the Steelers to convert 11 of 15 third downs, extending drives and letting them control the clock for 34:43. The Eagles forced two punts, one turnover and allowed five TDs and a field goal on six other drives.

After playing in his first game wi ...