The Los Angeles Rams' four-game sweep of the NFC East sometimes seemed like the preseason that NFL teams never got this year.

The Rams can only beat the teams in front of them, and they've done it emphatically so far against what looks like the NFL's worst division.

After completing the demolition with a 30-10 win over Washington on Sunday, the Rams (4-1) are moving on to tougher matchups on their schedule with a strong record and a firm knowledge of what's working for them. 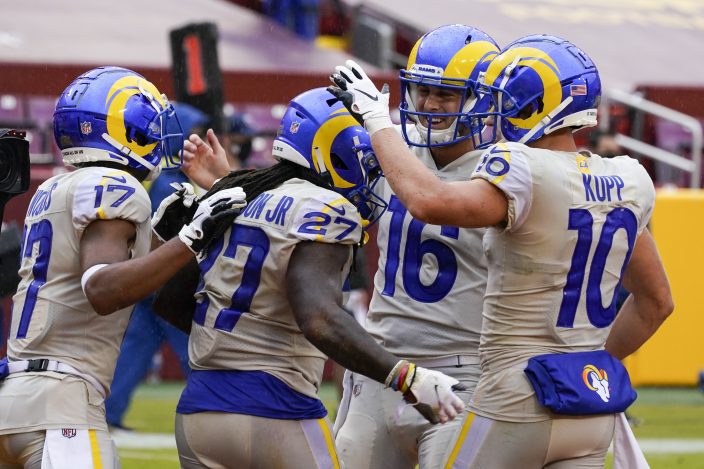 Los Angeles Rams' Darrell Henderson (27) is congratulated after runnig for a touchdown during the second half of an NFL football game against the Washington Football Team Sunday, Oct. 11, 2020, in Landover, Md. (AP PhotoSteve Helber)

“It’s a lot of confidence," said quarterback Jared Goff, who passed for 309 yards in the pouring rain and also rushed for a touchdown. “Right off the bat, in five weeks, we’re 4-0 versus one division, and that gives you a little boost of confidence, (but) obviously there’s a long ways to go.”

Los Angeles controlled most aspects of its win in Washington, with a whopping 429-108 advantage in total yards. The Rams' defense sacked Washington's quarterbacks eight times, while the Rams' running game led another steady, productive offensive effort from a unit that has been better than almost everybody predicted.

Not even three round trips to the East Coast in four weeks threw off the Rams, who look like a Super Bowl contender after plenty of preseason prognosticators thought they would finish last in their division. 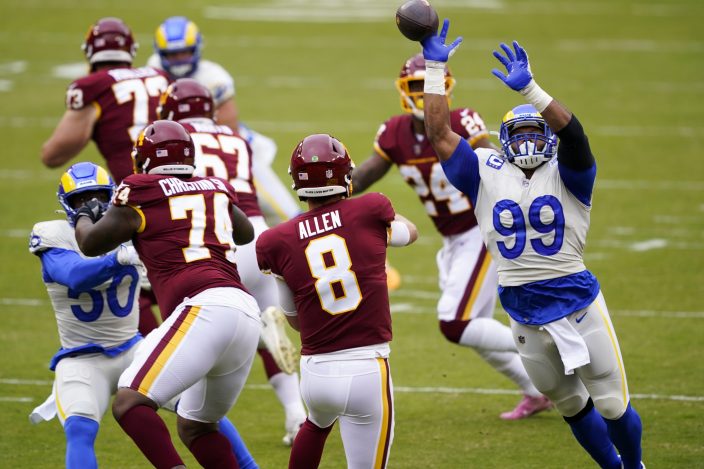 “This is a mature team,” said coach Sean McVay, who got his first win over the franchise that employed him for six years before he landed the top job with the Rams in 2017. “They can handle a lot of things. I think the guys have gotten comfortable in a short amount of time making these three trips in the last month.”

The Rams will need that knowledge when they make round trips to Tampa Bay and to Miami next month. Until then, they can get to work on fine-tuning a roster that's working well on both sides of the ball.

Coordinator Brandon Staley's defense put up its second straight spectacular game after a clunker in Buffalo, completely throttling the Washington offense by allowing just two of its 13 drives to reach Rams territory. Los Angeles is the only team in the NFC that has allowed fewer than 100 points, and its 90 points allowed are the third-fewest in the NFL among teams that have played all five games.

Along with the eight sacks, the Rams got strong games in the secondary from returning rookie Jordan Fuller, fellow safety John Johnson and cornerback Darious Williams. Staley also showed smart in-game adjustments: When linebacker Troy Reeder got targeted repeatedly in pass coverage by Washington, Staley used him as a pass rusher and got three sacks from Reeder.

The offense had another midgame lull after another strong start, going seven straight drives without a touchdown. The weather is a clear mitigating factor, but the Rams weren't happy with their execution and play-calling in several big situations. Los Angeles continues to be in the middle of the NFL pack in red zone effectiveness despite being third in the NFL with 2,018 total offensive yards.

The Rams' three-back approach to the running game in Todd Gurley's absence continues to be a big success. Rookie Cam Akers led with 61 yards rushing, most of them on a brilliant 46-yard rumble, while Darrell Henderson remained the big-play man with 38 yards and a touchdown to go with three catches for 30 yards and another TD.

“I think it presents a complete backfield, a three-headed monster feeding off each other and making plays,” Akers said Monday.

Rookie kicker Samuel Sloman missed his second extra point of the season. He has also missed two field goals. The Rams haven't yet needed a big kick to win a game, but Sloman has yet to prove as reliable as departed Greg Zuerlein.

LB Ogbonnia Okoronkwo injured his left elbow in the third quarter in Washington.

7 1/2 — Aaron Donald's sack total after five games, tops in the NFL. The All-Pro defensive tackle had just one sack in LA's first two games before getting 6 1/2 in the next three, including a whopping four against Washington. He also has 13 quarterback hits, six tackles for loss and two forced fumbles.