The Health Ministry raised India’s confirmed total to more than 7.17 million cases on Tuesday but said the country was showing a trend of declining daily cases over the last five weeks.

According to data shared by the Health Ministry, the average number of daily cases from Sept. 9-15 was 92,830. The average has steadily declined since then, falling to under 73,000 per day over the last week.

Meanwhile, India’s testing rate has remained constant, with almost 1.1. million tests being carried out every day.

India, a country of nearly 1.4 billion people, is second in the world in total cases, behind only the U.S., which has confirmed over 7.8 million infections. 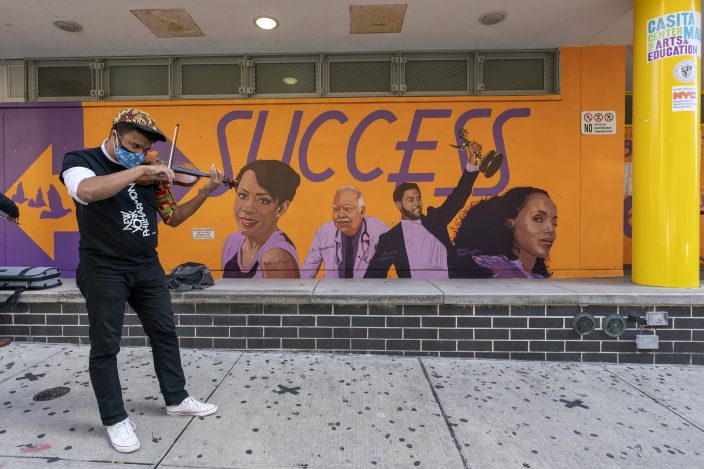 Violinist Curtis Stewart, a member of the NY Phil Bandwagon, warms up before performing outside the Casita Maria Center For Arts & Education in the Hunts Point neighborhood of the Bronx borough of New York, Friday, Oct. 2, 2020. The NY Phil Bandwagon travels to three unannounced locations around New York City, Friday through Sunday, for an impromptu pullup chamber music concert as part of the New York Philharmonic's Fall 2020 activities. (AP PhotoMary Altaffer) 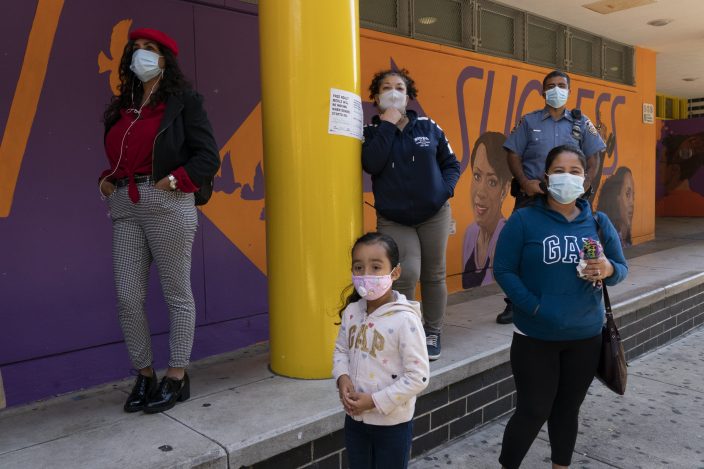 — As the pandemic presses on, waves of grief follow its path

BEIJING -- Authorities in the eastern Chinese port city of Qingdao say they have completed coronavirus tests on more than 3 million people following the country’s first reported local outbreak of the virus in nearly two months.

The city’s health department said Tuesday that no new positive cases had been found among the more than 1.1 million test results returned thus far. The city said it had a total of 12 cases, six with symptoms and six without, since the new outbreak was first spotted over the weekend at a hospital.

The National Health Commission, however, said Tuesday that at least six new cases of the virus were found in Qingdao in the past 24 hours.

The reason for the discrepancy was not immediately clear.

The National Health Commission numbers released Tuesday reported a total of 30 new virus cases in the previous 24 hours nationwide. It broke down those numbers into 13 cases in which people had symptoms and 17 cases in which they had no symptoms. The total number of locally transmitted cases, both with and without symptoms, was 11, while the rest were listed as imported.

SEOUL, South Korea -- South Korea has reported 102 new cases of the coronavirus, its first daily increase over 100 in six days. The steady rise is a cause of concern as officials have lowered social distancing restrictions this week after concluding that the viral spread was slowing after a spike in mid-August.

The figures released by the Korea Disease Control and Prevention Agency brought the national caseload to 24,805, including 434 deaths.

Fifty-eight of the new cases was reported from the densely populated Seoul metropolitan area, where transmissions have been linked to hospitals, sports facilities, a funeral home and an army unit.

Thirty-three of the new cases have been linked to international arrivals, including passengers from Russia, Nepal, Japan and the United States.

South Korea relaxed its social distancing guidelines beginning Monday, which allowed high-risk businesses like nightclubs and karaoke bars to reopen and for professional sports leagues to proceed with plans to bring back fans in the stands.

AUSTIN, Texas -- An ongoing wave of COVID-19 cases in the El Paso area prompted Gov. Greg Abbott to announce Monday that a surge team of medical professionals would be dispatched to the area.

The 75 doctors, nurses and respiratory therapists being dispatched will be accompanied by a supply of extra personal protective equipment to support efforts by El Paso hospitals to meet the surge of coronavirus infections. The team will be in addition to the 169 professionals the state previously sent to the area.

As of Monday, 313 people were hospitalized with COVID-19 in El Paso, Hudspeth and Culberson counties of West Texas. The state estimated that active COVID-19 cases in El Paso County alone soared from almost 4,000 on Oct. 1 to just over 6,000 Monday. Seven cases were fatal during that period.

FRANKFORT, Ky. -- Kentucky’s governor said Monday that he kept up a busy work schedule despite being confined to the governor’s mansion after being around someone who later tested positive for COVID-19.

Gov. Andy Beshear said he will follow the advice of state public health officials in determining how long he and his family remain quarantined at the mansion. His next COVID test is expected to be Tuesday and then Friday, he said. He added he tested negative last week.

“I’ve asked them (health officials) to treat me like anybody else out there,” the Democratic said. “So I’m going to follow all the rules and all the guidelines.”

Beshear said he had one of his busiest Mondays in a while, and that the biggest challenge of working in quarantine — away from his staff -- was all the time he spent “staring at a screen.”

“I’m working,” he said. “I’m just having to do it like many other families are having to do — remotely with sometimes my kids bouncing in and out, or a vacuum cleaner going.”

In his virtual briefing, the governor reported Kentucky’s highest number of coronavirus cases on a Monday since the pandemic began. He said that offers more evidence that the outbreak continues its recent escalation in the Bluegrass State.

Paul Chavez had no idea where a sc ...