Bryson DeChambeau has taken some unusual routes in his career, from his single-length clubs to bulking up in an effort to swing as hard as he can. Add to the list his decision to take a month off without competition leading to the Masters.

The Shriners Hospitals for Children Open last week, where DeChambeau tied for eighth, is his only tournament between winning the U.S. Open on Sept. 20 and playing the first round of the Masters on Nov. 12.

So much for trying to use tournaments to peak for the majors. 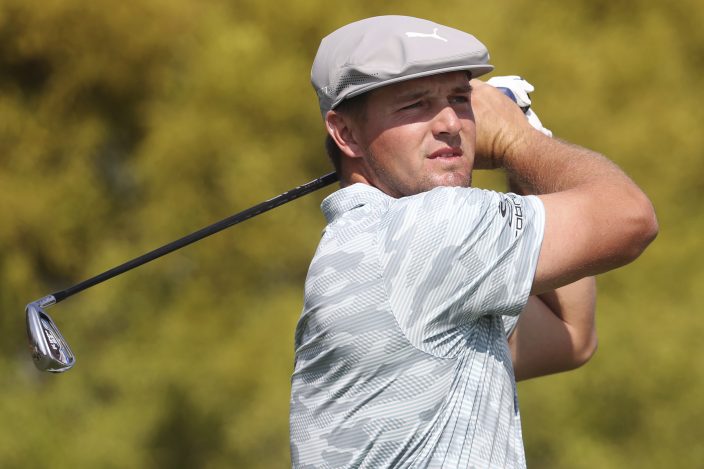 Bryson DeChambeau tees off on the first hole during the third round of the Shriners Hospital for Children Open golf tournament, Saturday, Oct. 10, 2020, in Las Vegas. (Erik VerduzcoLas Vegas Review-Journal via AP)

DeChambeau figures he has gone down this road before. He mentioned the three months golf was shut down because of the COVID-19 pandemic. When he returned at Colonial, he was bigger and stronger and his club speed was faster. He missed a playoff by one shot. He followed with a pair of top 10s. And then he won the Rocket Mortgage Classic.

“As I look back at quarantine ... I felt like I came back really well not playing any golf, not doing anything,” DeChambeau said. “I feel like my game is good enough right now to do that. I don’t feel like there is going to be a problem coming back. We’ll see how it works out for me. I have no idea, but I feel comfortable. And that’s all that matters for me right now.”

In his world, “not doing anything” is not playing tournaments. There is always work. 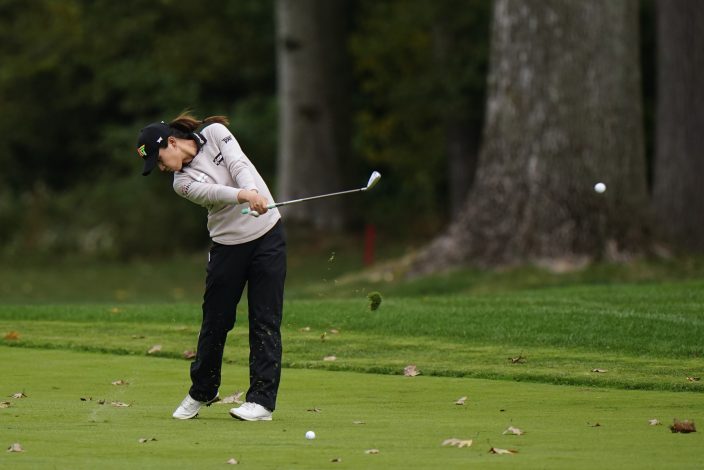 Lydia Ko, of New Zealand, hits from the first fairway during the third round at the KPMG Women's PGA Championship golf tournament at the Aronimink Golf Club, Saturday, Oct. 10, 2020, in Newtown Square, Pa. (AP PhotoMatt Slocum)

DeChambeau left Winged Foot with the U.S. Open trophy and headed straight to Denver to start working out. Upon leaving Las Vegas, he plans to be in Dallas “practicing every day, working out every day and doing a lot of speed training.”

“Every other day I’ll do a speed training session trying to get my swing speed, at least with a 48-inch driver, up to 200 (mph) on average,” he said.

The 48-inch driver, used primarily in long driving competitions, is what he hopes to bring to Augusta National, where he expects to play all the long holes (except No. 10) differently than they’ve ever been played. 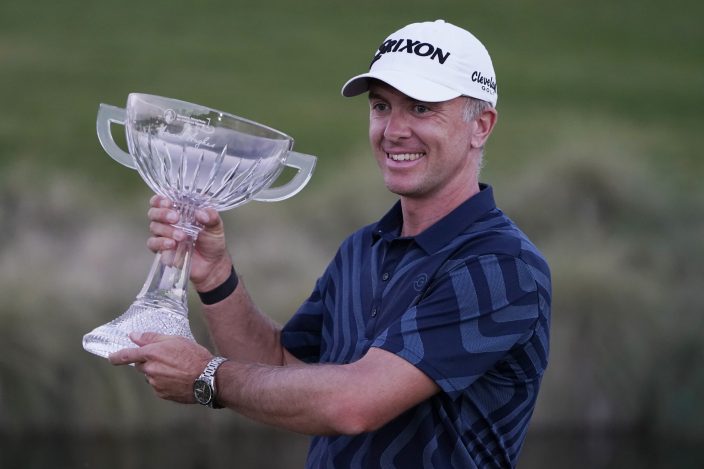 DeChambeau said he would take one scouting trip to Augusta National ahead of the first Masters ever held in November. He mentioned he would go with a good friend — presumably not Brooks Koepka — and “have some fun and see what I can do.”

“I’ve still got some equipment stuff coming in the next two months. That’s mainly why I’m taking it off,” he said, declining to elaborate. “I feel like the advantages that I usually have could be much improved upon with the equipment, and we don’t have it yet. But we’re diligently working on it behind the scenes.”

The No. 1 player in women’s golf, Jin Young Ko, appears to be headed back to the LPGA Tour next month.

Golfweek reports her caddie, David Booker, has confirmed Ko plans to play in the Pelican Women’s Championship in Florida on Nov. 19-22, and then after a week off for Thanksgiving, she will play outside Dallas and then the U.S. Women’s Open in Houston.

If she doesn’t qualify for the CME Group Tour Championship, the event has two sponsor exemptions.

Ko, who swept all the major LPGA awards last season, has not played an LPGA event since the season-ending Tour Championship last November as she rides out the COVID-19 pandemic at home in South Korea. She has played four times on the Korean LPGA, with a pair of top 10s.

The USGA ticked off the 48th and 49th states where it has held championships in 2012 when it played the U.S. Amateur Public Links in Utah and U.S. Junior Amateur in New Hampshire. Ten years later, it will have ticked off the last one.

The USGA is taking the 60th U.S. Senior Women’s Amateur to Anchorage Golf Course in the summer of 2022. It will be the first USGA championship for Alaska, and it will mean the USGA has held championships in all 50 states and the District of Columbia.

The municipal course is 6,600 yards through tree-lined fairways offering views of three mountain ranges, including Denali, the tallest peak in North America.

“To showcase to the world what sort of golf we have here in Alaska, and demonstrate both the challenge and beauty of our golf course on such a grand stage, is something we cannot wait for. The championship can’t come soon enough,” said Rich Sayers, general manager of Anchorage Golf Course.

The LPGA Championship dates to 1955, so there was some resistance from veteran players when the PGA of America got involved and changed the name to the Women’s PGA Championship, with sponsorship support from KPMG.

As the partnership enters its sixth year, players are starting to see the benefits, which starts with where they play.

Aronimink Golf Club outside Philadelphia was the site this year, where Gary Player won his first PGA Championship in 1962. Hannah Green won last year at Hazeltine, which staged the U.S. Open twice, twice denied Tiger Woods in the PGA Championship (Rich Beem in 2002 and Y.E. Yang in 2009 outplayed him to win) and hosted a rare American victory in the Ryder Cup in 2016.

Next up is Atlanta Athletic Club, site of the 1976 U.S. Open and PGA Championships in 1981, 2001 and 2011. And then the Women’s PGA is headed to Congressional (Rory McIlroy set the U.S. Open scoring record in 2011), followed by Baltusrol, where Jack Nicklaus won the U.S. Open twice and Phil Mickelson won his lone PGA Championship title.

“I think we’ve moved really in a great direction to bring women’s golf to some of the best golf courses in the U.S., so I think it’s a great opportunity for us,” Lydia Ko said. “But just even looking down the road, we’re able to go to some of the nice golf courses were the men play, so it’s great that the female golfers can go there because it’s the best of the best.”

Golf courses make majors special. Some of the more memorable U.S. Women’s Opens were at Oakmont twice, Newport (Annika Sorenstam’s final major) and Pinehurst No. 2, where Michelle Wie won the week after Martin Kaymer won the U.S. Open. Still to come for the women is Pebble Beach for the first time.

U.S. Women’s Amateur champion Rose Zhang is this year’s winner of the Mark H. McCormack Medal as the leading female in the World Amateur Golf Ranking. After winning the Women’s Amateur, the 17-year-old Zhang won the Rolex Girls Junior Championship by six shots and was low amateur in the ANA Inspiration with a tie for 11th, which pushed her past Yu-Chiang Hou of Taiwan to No. 1 in the ranking. ... Martin Laird became the third player in four regular PGA Tour events this season to be outside the top 300 in the world ranking when he won. ... Takumi Kanaya, the No. 1 player in men’s amateur golf who won a Japan Golf Tour event, has turned pro and signed with WME Sports. ... The PGA Tour Latinoamerica will play outside Miami and in the Dominican Republic in late December. Three events scheduled for Argentina and Chile have been pushed back to 2021.

Sei Young Kim's first major in the Women's PGA Championship was her 11th victory on the LPGA Tour since 2015, the most of any player.

“I’m going to look like a beach ball if I put on 40 pounds.” — Justin Thomas, when asked if he has been influenced by what Bryson DeChambeau has done to add distance.