Emmanuel Sanders is beginning to produce the way Saints quarterback Drew Brees predicted he would when New Orleans signed the veteran receiver away from San Francisco as a free agent.

Now in his 11th season, Sanders caught a single-game, career-high 12 passes for 122 yards to help the Saints defeat the Chargers 30-27 in overtime on Monday night.

Sanders might not see as many passes thrown his way after the anticipated return of 2019 Offensive Player of the Year Michael Thomas after New Orleans' Week 6 bye. But Sanders' evidently increasing comfort in New Orleans' offense provides evidence of how the Saints could make it tough for opposing defenses to focus coverage too heavily on Thomas as the season wears on. 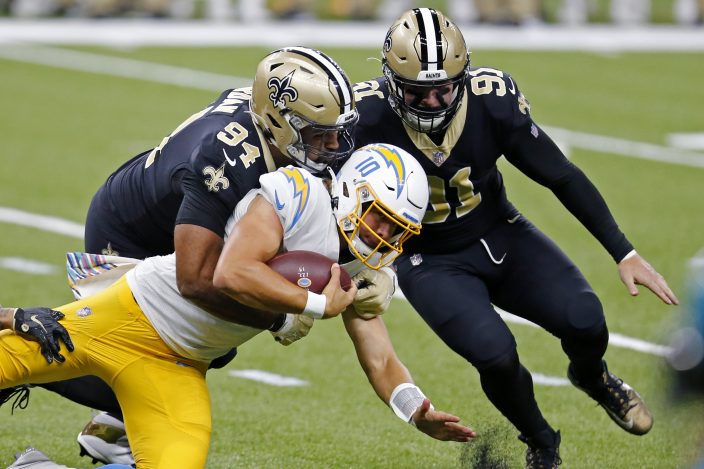 “He’s a weapon. He can do a lot of things. He’s a savvy football player," Brees said of Sanders, who won a Super Bowl with Denver and played in last season's Super Bowl with the 49ers. "We didn’t really get an offseason together. We didn’t get preseason games. So, you get into the season. And obviously, Mike goes down. And then you’re just kind of trying to find your rhythm and your timing with not just him, but with everybody.

"Obviously, here we are, Week 5, but I think you’ve seen over the last two weeks just how that’s progressed — and what a huge part of this offense he can be,” Brees added.

Sanders had eight catches combined in New Orleans' first three games and not more than four receptions in any one of those games. His production began to surge in a Week 4 victory in Detroit, when he caught six passes for 93 yards.

Sanders called his career-high catches against Los Angeles “something to build off of,” adding that he's eager to see how the Saints' offense functions when Thomas returns.

“We've got arguably the best receiver in the world — from his performance last year — coming back to us,” Sanders said. “So for me and him to work together and try to take this offense to an even better level, I just feel like the sky's the limit.”

The hurry-up, or “two-minute” offense. After struggling for most of the first half, the Saints’ first TD against the Chargers came after they got the ball with 1:59 to go in the second quarter. New Orleans also drove for a tying touchdown in the final minutes of the fourth quarter, scoring on Taysom Hill’s 9-yard run with 52 seconds left.

The secondary. Chargers rookie QB Justin Herbert burned them for big plays repeatedly, including a 64-yard scoring pass to Mike Williams in the fourth quarter and a 29-yard pass to Williams in the final half minute that set up Los Angeles for a 50-yard field goal that could have won the game, but it hit the upright.

WR Michael Thomas. He was on schedule, physically, to return from an ankle injury on Monday night, but he was suspended for conduct detrimental to the team for punching a teammate. The Saints only narrowly won their second straight without him.

2 — Number of times Brees has led the Saints to a victory after his club trailed by 17. Brees, however, finds that figure a bit arbitrary, noting that the Saints have come back from close to that large a deficit a number of times, including from 14 a week earlier in Detroit.

The Saints have a Week 6 bye before returning in Week 7 to host NFC South foe Carolina on Oct. 25.