A look at what’s happening around the majors Wednesday:

With their rotation in flux, the Los Angeles Dodgers turn to 24-year-old playoff veteran Julio Urías in Game 3 of the NL Championship Series as they try to climb out of a 2-0 hole against Atlanta. 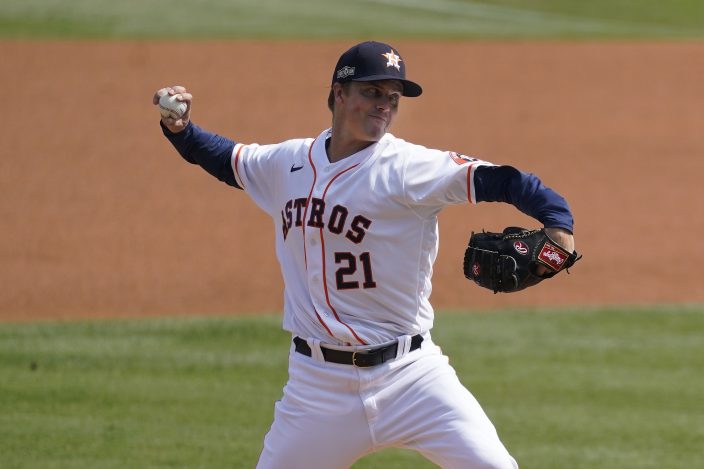 Dodgers ace Clayton Kershaw was scratched from his scheduled Game 2 start Tuesday due to back spasms. The team still expects he'll be able to pitch later in the series, but it will be Urías in Game 3 against Braves rookie Kyle Wright.

Urías, already pitching in his fourth postseason, was the winner in relief in the Game 3 clincher last Thursday against San Diego during the Division Series. He allowed only one hit and an unearned run over five innings.

Wright threw six scoreless innings with seven strikeouts in his postseason debut in the clinching Game 3 of the NLDS against Miami. The 25-year-old righty was the fifth overall pick in the 2017 draft out of Vanderbilt.

Houston Astros pitcher Zack Greinke grabs his cap on the mound during the fifth inning of Game 4 of a baseball American League Division Series against the Oakland Athletics in Los Angeles, Thursday, Oct. 8, 2020. (AP PhotoAshley Landis)

There have been 14 teams take a 2-0 lead in the best-of-seven NLCS, and all have gone on to win the pennant.

As the Rays go for a four-game sweep of defending AL champion Houston in the ALCS, right-hander Tyler Glasnow is expected to pitch for the first time since starting on two days’ rest in Tampa Bay’s AL Division Series Game 5 win over the Yankees. The 6-foot-8 Glasnow delivered 2 1/3 scoreless innings in a 2-1 victory, throwing 37 pitches. He’ll pitch in AL Championship Series Game 4 against Houston on four days’ rest. 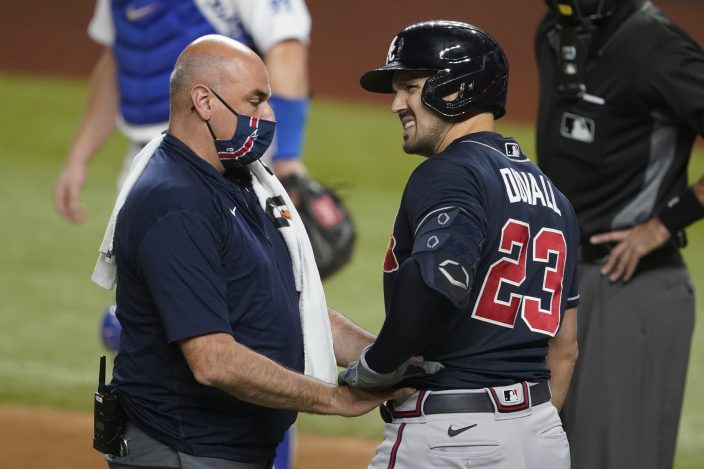 Atlanta Braves' Adam Duvall is checked by a trainer during the second inning in Game 1 of a baseball National League Championship Series against the Los Angeles Dodgers Monday, Oct. 12, 2020, in Arlington, Texas. Duvall left the game. (AP PhotoTony Gutierrez)

Glasnow will face right-hander Zack Greinke, who might be making his last appearance without fans in the stands — something the offbeat veteran has cherished in this pandemic-altered season.

“I don’t really notice fans when the game’s going on, but warming up and practice before games, I mean for me it’s nice not having fans in the stands,” Greinke said. “Most people like it. When the game comes on it’s the same for me.”

Asked to explain, he said: “Because then there’s no one there to talk to you and ask for autographs and want pictures and all that stuff. I don’t like to do that stuff. It’s nice not having them, for me. Most people like it. I don’t like it.” 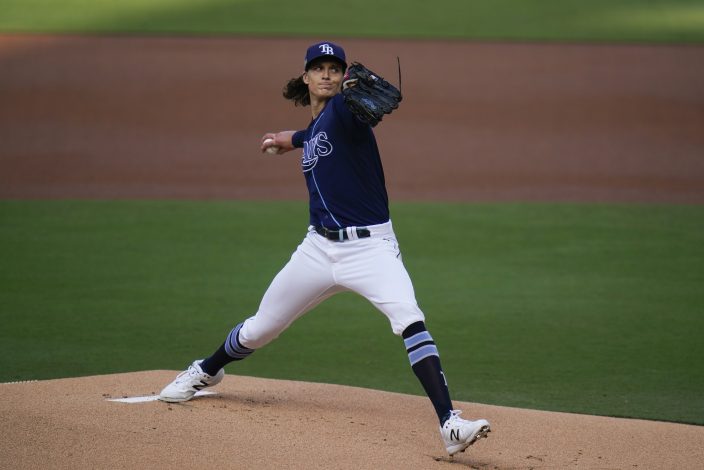 The Astros and Rays are playing their ALCS without fans in San Diego, and the winner will travel to Arlington, Texas, for a neutral-site World Series where tickets will be sold.

Braves outfielder Adam Duvall will miss the rest of the postseason because of an injury to his left side.

He was replaced on the roster for the NL Championship Series against the Los Angeles Dodgers by infielder Johan Camargo in a move approved by Major League Baseball. Duvall will not be eligible to play if Atlanta reaches the World Series.

Duvall hurt his oblique in Monday’s series opener when he fouled off a pitch in the second inning. He was replaced in the middle of the plate appearance by 21-year-old rookie Cristian Pache, who started Game 2 in center field and went 1 for 5 with an RBI double.

Camargo hit .200 with four homers and nine RBIs in 120 at-bats this season and was not on the roster for the first two rounds of the playoffs.