The Health Ministry on Thursday reported 680 fatalities in the past 24 hours, the lowest in 11 weeks, raising the country's death toll since the pandemic began to 111,266. The country was seeing more than 1,000 virus deaths per day last month. 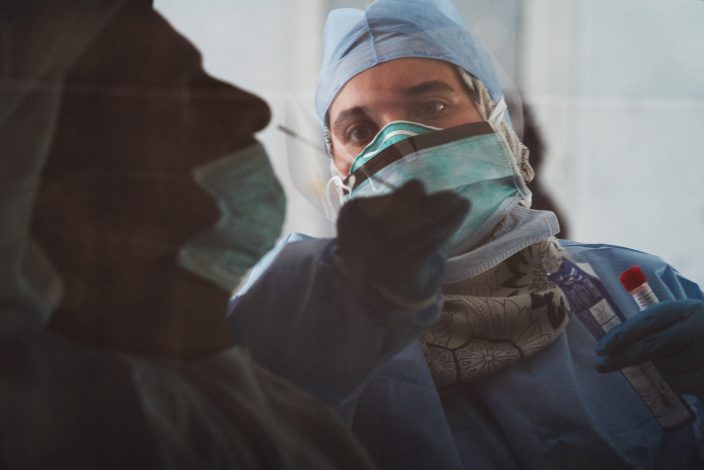 FILE - In this April 2, 2020, photo taken through a tinted car window, a technician takes a nasal swab for a new coronavirus detection test at a drive-thru testing facility in Abu Dhabi, United Arab Emirates. U.S. diplomats and security officials privately warned the state of Nevada not to use Chinese-made coronavirus test kits donated by the United Arab Emirates over concerns about patient privacy, test accuracy and Chinese government involvement, documents obtained by The Associated Press show. (AP PhotoJon Gambrell, File)

According to the ministry, India’s average number of daily cases dropped to 72,576 last week from 92,830 during the week of Sept. 9-15, when the virus peaked. Over the last month, the country has been seeing a trend of declining cases on a week-to-week basis.

Health experts have warned about the potential for the virus to spread during the religious festival season beginning later this month, which is marked by huge gatherings of people in temples and shopping districts,

A man walks outside the Abasto Shopping Mall amid the new coronavirus pandemic in Buenos Aires Argentina, Wednesday, Oct. 14, 2020. After seven months of closure, Buenos Aires shopping malls are reopening as the country is experiencing a spike of COVID-19 cases in the interior of the country. (AP PhotoVictor R. Caivano)

— Melania Trump says son Barron had coronavirus, but no symptoms 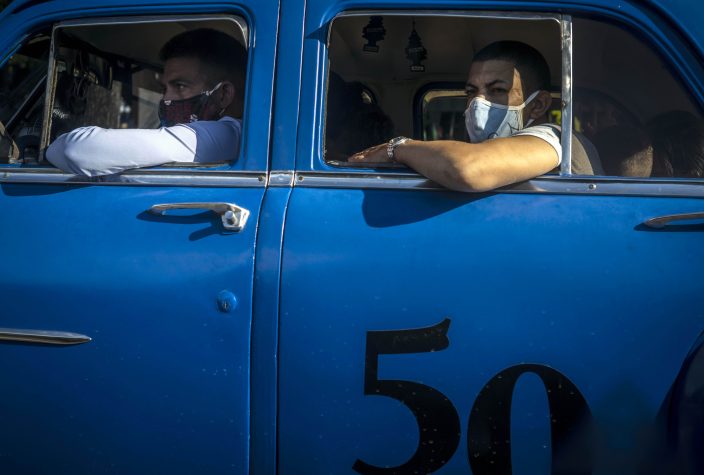 Wearing masks as a precaution against the spread of the new coronavirus people travel in a taxi in Havana, Cuba, Wednesday, Oct. 14, 2020. (AP Photo Ramon Espinosa)

COLOMBO, Sri Lanka — Authorities in Sri Lanka will impose a curfew on a key industrial town, after a surge of COVID-19 cases centered around a garment factory in the capital’s suburbs.

Police spokesman Ajith Rohana says a curfew will be imposed in Katunayake from Thursday until further notice.

Katunayake houses the country’s flagship industrial zone where more than 50,000 workers are employed. The country’s main international airport is also located there.

Authorities say the factories in the zone will continue their operations despite the curfew.

A curfew was first imposed last week in some parts of Western province, where the cluster was reported in Minuwangoda which is near Katunayake.

By Thursday, the number of infections linked to the cluster had climbed to 1,723, and more than 2,000 other people have been asked to quarantine at home.

Prime Minister Scott Morrison said Thursday that he discussed reopening air routes with the leaders of all three countries.

He described Japan and South Korea as “two countries that have done particularly well” in dealing with the pandemic.

“There are a number of countries we’re looking at to see what we can do probably next year. We’re not going to rush into this,” Morrison said.

The three Asian countries “are my current priorities in how we would pursue that,” he added.

Australia reported only 12 new cases of community transmission of the virus on Thursday.

SEOUL, South Korea — South Korea has reported 110 new cases of the coronavirus as a hospital in Busan emerged as the country’s latest cluster of infections.

The numbers released by the Korea Disease Control and Prevention Agency on Thursday brought the number of infections since the pandemic began to 24,988, with 439 deaths.

Half of the new cases were reported from Busan, a southern port city where at least 54 infections were tied to a hospital for the elderly.

Health officials are planning to test 160,000 employees at hospitals, nursing homes and welfare centers for senior citizens in Seoul and nearby areas in part of efforts to prevent outbreaks at these facilities.

MEXICO CITY — Mexico reported Wednesday that a total of 1,744 health-care workers have died so far of COVID-19, and another 164 are suspected to have died of it but their test results are still pending.

The number of doctors, nurses, technicians and hospital employees confirmed to have been infected with the novel coronavirus in Mexico now amounts to 127,053. That means health care professionals account for about 15% of all Mexico’s confirmed coronavirus cases, and about 18% of all COVID-19 deaths.

The Health Department said that of those who died, 42% were nurses, 26% were doctors, and 32% were technicians, cleaning staff or other hospital employees.

Mexico has one of the highest rates of medical-personnel deaths in the world, and hospital employees have staged a number of demonstrations in Mexico to protest insufficient personal protective equipment. But Health Department officials denied the death rates was because of a lack of protective gear.