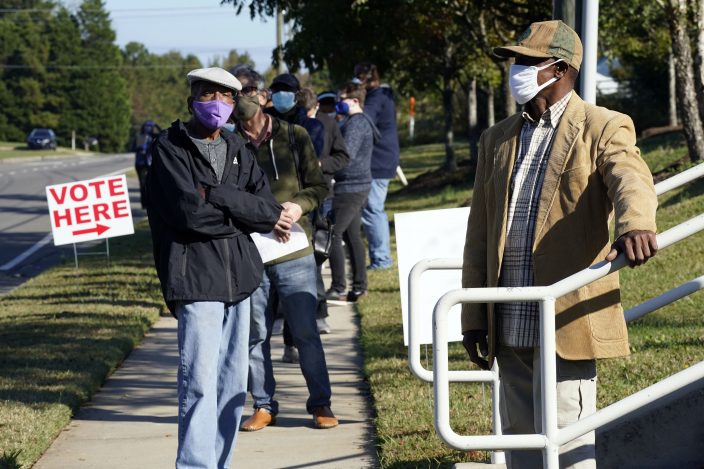 VIRUS-OUTBREAK-NEVADA-UAE-CHINA — U.S. diplomats and security officials privately warned the state of Nevada not to use Chinese-made coronavirus test kits donated by the United Arab Emirates over concerns about patient privacy, test accuracy and Chinese government involvement, documents obtained by The Associated Press show. By Jon Gambrell and Michelle L. Price. SENT: 1,970 words, photos. An abridged version of 960 words is available.

AP POLL-ELECTION 2020-TRUMP — Less than three weeks from Election Day, majorities of Americans are highly critical of President Donald Trump’s handling of both the coronavirus pandemic and his own illness, according to a new poll from The Associated Press-NORC Center for Public Affairs Research. The survey also shows that few Americans have high levels of trust in the information the White House has released about Trump’s health. By Julie Pace, Hannah Fingerhut and Nathan Ellgren. SENT: 855 words, photos, video. 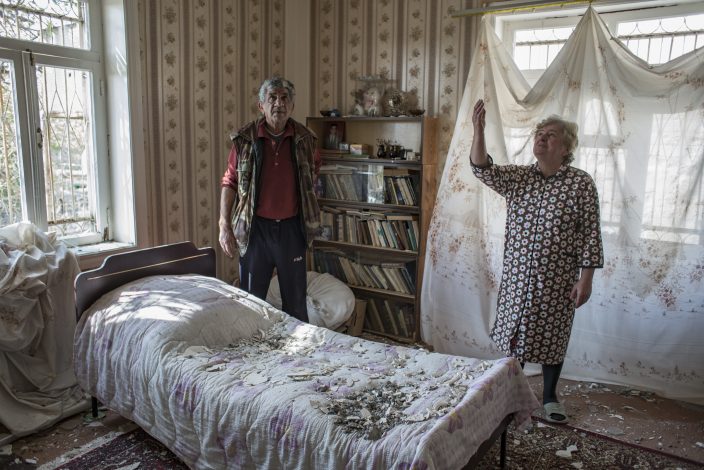 Nazile Tehmezova, right, and her husband Ramiz Huseyinov inspect the damage to their house following overnight shelling by Armenian forces, in the city of Terter, Azerbaijan, Thursday, Oct. 15, 2020. The conflict between Armenia and Azerbaijan continues for a third week despite a Russia-brokered cease-fire deal, as both sides exchanged accusations and claims of new attacks over the separatist territory of Nagorno-Karabakh. (Can ErokDHA via AP)

ELECTION 2020 — President Donald Trump and challenger Joe Biden compete for TV audiences in dueling town halls instead of meeting face-to-face for their second debate as originally planned. The town halls offer a different format for the two candidates to present themselves to voters, after the two held a chaotic and combative first debate late last month. By Darlene Superville, Jonathan Lemire, Aamer Madhani and Will Weissert. SENT: 950 words. UPCOMING: Developing from Trump afternoon rally, NBC town hall at 8 p.m., Biden town hall on ABC at 8 p.m., 990 words by 9 p.m., photos, video. WITH: ELECTION 2020-THE LATEST. 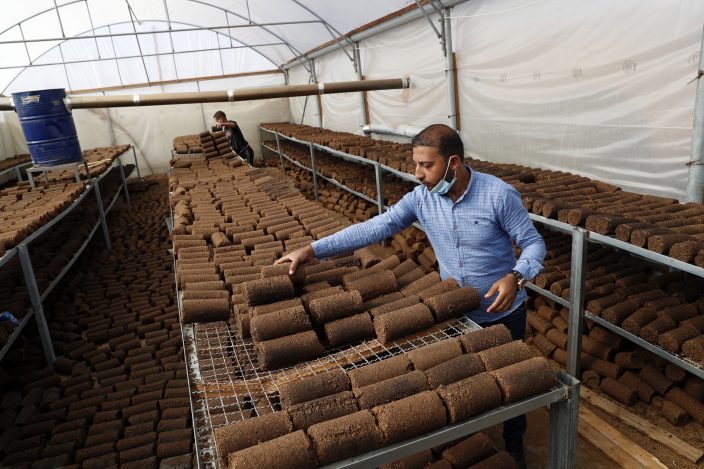 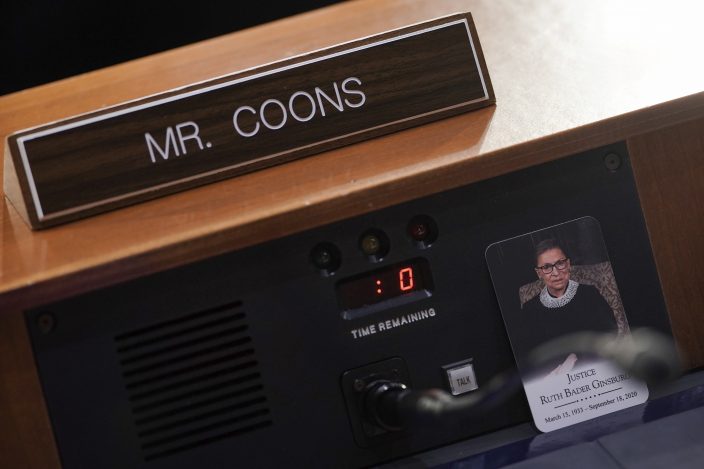 A photo of the late Justice Ruth Bader Ginsburg is seen at the seat of Sen. Chris Coons, D-Del., during the confirmation hearing for Supreme Court nominee Amy Coney Barrett, before the Senate Judiciary Committee, Thursday, Oct. 15, 2020, on Capitol Hill in Washington. (Greg NashPool via AP)

VIRUS-OUTBREAK — Fears rise that Europe is running out of chances to control its fall coronavirus outbreak, as infections hit record daily highs in Germany, the Czech Republic, Italy and Poland. France slapped a 9 p.m. curfew on many of its biggest cities and Londoners faced new travel restrictions as governments imposed increasingly tough measures. By Geir Moulson. SENT: 985 words, photos.

VIRUS OUTBREAK-CHILD LABOR — The coronavirus pandemic is threatening the future of a generation of the world’s children, depriving them of schooling and sending them to work. Across the developing world, two decades of gains against child labor are eroding. Instead of going to school, children in Kenya are grinding rocks in quarries. Tens of thousands of children in India have poured into farm fields and factories. Across Latin America, kids are making bricks, building furniture and clearing brush, once after-school jobs that are now full-time work. By Maria Verza, Carlos Valdez and William Costa. SENT: 2,200 words, photos. An abridged version of 1,035 words is available.

VIRUS OUTBREAK-UNEMPLOYMENT BENEFITS — The number of Americans seeking unemployment benefits rose last week by the most in two months, to 898,000, a historically high number and evidence that layoffs remain a hindrance to the economy’s recovery from the pandemic recession. By Christopher Rugaber. SENT: 960 words, photos.

VIRUS-OUTBREAK-KANSAS — Rural areas in Kansas are seeing large spikes in coronavirus cases, and Gove County in the northwestern part of the state has been among the hardest hit. SENT: 1,000 words, photos.

VIRUS OUTBREAK-HAWAII TRAVEL TESTING — Anxious residents and business leaders will be watching closely as tourists begin to return to Hawaii when a new pre-travel testing program debuts. The move by state officials is an effort to stem the devastating downturn the pandemic has caused in Hawaii’s tourism-based economy. SENT: 800 words, photos.

VIRUS OUTBREAK-INDIA-CINEMAS REOPEN — Seven months after screens went dark, cinemas are reopening in much of India with older titles on the marquee. SENT: 800 words, photos.

VIRUS OUTBREAK-ISRAEL — Israel has decided to relax some of the restrictions imposed during a monthlong nationwide lockdown to drive down a raging coronavirus outbreak. Starting Sunday, daycare and preschool for children up to six years old will reopen as will some businesses that don’t serve walk-in customers. SENT: 375 words, photo.

PETRIFIED FOREST FOSSILS — Researchers have discovered fossils of a tiny burrowing reptile among a vast expanse of petrified wood in Arizona. SENT: 190 words.

BRITAIN QUEEN ELIZABETH — Queen Elizabeth II has carried out her first public engagement outside of a royal residence since early March. The 94-year-old monarch was joined by her grandson Prince William at the Defence Science and Technology Laboratory. SENT: 350 words, photos.

GERMANY-TESLA — A German utility company says it has shut down the pipes supplying Tesla with water for the construction of a factory near Berlin because the automaker hasn’t paid its bills. SENT: 145 words.

RACIAL INJUSTICE-LIFE SENTENCE — A Black man whose life sentence for stealing a set of hedge clippers in a 1997 burglary drew scathing criticism from the chief justice of Louisiana’s Supreme Court was granted parole. SENT: 165 words.

ONE-GOOD-THING-HURRICANE-DOGS -- A man in Mexico sheltered about 300 dogs from the strong winds and heavy rain of Hurricane Delta, which made landfall south of Cancun, blowing down trees and knocking out power in some of the area’s resorts. It started when Ricardo Pimentel Cordero, who runs an animal shelter in the area, posted on Facebook that he was going “to fill his home with dogs” to try to save them — and dozens of other critters — from the storm. Pimentel says he’s surprised by the kindness of people from across the world who have donated to his shelter after his post went viral. SENT: 650 words, photos.

KYRGYZSTAN-PROTESTS — Kyrgyzstan’s embattled president said he was resigning following protests over a disputed parliamentary election, the third time in 15 years that a leader of the Central Asian country has been ousted by a popular uprising. SENT: 625 words, photos.

THAILAND-PROTESTS — Thailand’s government declared a strict new state of emergency for the capital, a day after a student-led protest against the country’s traditional establishment saw an extraordinary moment in which demonstrators heckled a royal motorcade. SENT: 1,060 words, photos.

NIGERIA-POLICE PROTESTS — Widespread protests against Nigeria’s police have turned violent as demonstrators have been attacked by armed gangs in the streets of several cities, according to witnesses. SENT: 820 words, photos.

EUROPE-NAVALNY — The European Union and Britain imposed sanctions on six Russians, some among the highest-ranked officials in the nation, and one organization over the poisoning of Russian opposition leader Alexei Navalny with a Soviet-era nerve agent. SENT: 625 words, photos.

VATICAN SCANDAL — Pope Francis named a new head for the Vatican’s saint-making office to replace the once-powerful cardinal at the center of a growing corruption scandal that has raised questions about the current Holy See leadership. SENT: 620 words, photos.

ISRAEL SETTLEMENTS — Israel is pressing forward on plans for more than 3,000 settlement homes in the occupied West Bank. The new approvals, coupled with a separate round of new units approved the previous day, make 2020 one of the most prolific years for settlement building. SENT: 590 words, photo.

YEMEN — Yemen’s warring sides kicked off a long-awaited prisoner exchange, a day after the country’s Iran-backed rebels freed two Americans and released the remains of a third who had died in captivity. SENT: 840 words, photos.

SYRIA-ISLAMIC STATE — Kurdish-led authorities have released hundreds of militants from the Islamic State group imprisoned in northern Syria as part of a general amnesty in the region controlled by the U.S.-backed fighters. SENT: 370 words.

WILDFIRES-DEADLY SMOKE — Wildfires churning out dense plumes of smoke as they scorch huge swaths of the U.S. West Coast have exposed millions of people to hazardous pollution levels, causing emergency room visits to spike and potentially thousands of deaths among the elderly and infirm, according to an Associated Press analysis of pollution data and interviews with physicians, health authorities and researchers. SENT: 1,980 words, photos, video.

CALIFORNIA WILDFIRES — More than 50,000 California utility customers were without power and others around the state were urged to conserve electricity amid a fall heat wave that brought another round of extreme wildfire danger. SENT: 750 words, photos. WITH: ROCKIES-WILDFIRES —One of two Rocky Mountain wildfires fanned by strong winds has become the largest in Colorado’s history. SENT: 190 words.

RACIAL-INJUSTICE-METOO-ANNIVERSARY --As the #MeToo movement marks the third year since it received global recognition, founder Tarana Burke is working to make sure it remains inclusive and reclaims its original intent: A focus on marginalized voices and experiences. SENT: 1,090 words, photos.

TIMES UP HARASSMENT REPORT — Three years into the #MeToo movement, a new report finds almost three-quarters of people reporting workplace sexual harassment suffer from retaliation if they complain. The study found more than 7 out of 10 people who reported sexual harassment at work said they faced some form of retaliation, up to and including being fired. SENT: 760 words, photo.

UNIVERSITY-KKK GOVERNOR — A historically black university in Alabama has renamed a dormitory that honored a one-time governor who also led the Ku Klux Klan about a century ago. SENT: 300 words.

SPACE VENUS-FLYBY — A spacecraft bound for Mercury swung by Venus, using Earth’s neighbor to adjust its course on the way to the solar system’s smallest and innermost planet. SENT: 265 words, photos.

SMALL BUSINESS STRUGGLES-WINCHESTER — The viral pandemic has hammered small businesses across the United States — an alarming trend for an economy that’s trying to rebound from the deepest, fastest recession in U.S. history. SENT: 1,650 words, photos. An abridged version of 880 words is available.

FINANCIAL MARKETS-ELECTION — This presidential election is clearly unlike any other, but investors might be wise to treat it just like most of the previous ones. History shows the stock market’s performance doesn’t correlate that closely with which party controls the White House: It tends to rise following elections regardless of who wins. SENT: 980 words, photo. WITH: FINANCIAL-MARKETS — Stocks were falling on Wall Street, putting the market on track for its third straight loss this week. SENT: 750 words, photos.

RUDOLPH AUCTION — A stop-motion Rudolph of TV legend and his still-shiny nose are going up for auction. Santa is coming too. Figures of the flying reindeer and Saint Nick used in the 1964 animated special “Rudolph the Red-Nosed Reindeer” will be put up for sale to the highest bidder in Los Angeles on Nov. 13. SENT: 400 words, photos and video.

TV-MR. MERCEDES — One of Stephen King’s most creepy and tense stories was hiding in plain sight. “Mr. Mercedes” started life in 2017 as a broadcast offering on the AT&T-owned, DirecTV-exclusive Audience Network, only to be left marooned with an uncertain future. The crime series gets another life now after Peacock acquired it. SENT: 590 words, photos.

VIRUS OUTBREAK-NFL — The Atlanta Falcons, who are scheduled to play at Minnesota on Sunday, have shut down their practice facility “out of an abundance of caution” after one new positive test for COVID-19. The new positive came after rookie defensive tackle Marlon Davidson was placed on the Reserve/COVID-19 list on Tuesday. SENT: 500 words, photos.

BBN-NLCS — Three-time NL Cy Young Award winner Clayton Kershaw is set to start Game 4 of the NLCS, with the Los Angeles Dodgers trying to get even in the series two days after he was scratched because of back spasms. UPCOMING: 800 words, photos. Game starts 8:05 p.m.

The number of western monarch butt ...

Caris LeVert said Tuesday he was a ...