The Denver Broncos' second-year starter set out to learn how to skirt the types of injuries that have sidelined him two seasons in a row and sidetracked his progress as a pro.

“There is an art to it, and I’ve got to learn that art,” said Lock, who is expected to return to action Sunday when the Broncos (1-3) visit New England (2-2) for a twice-delayed game that was pushed back a day and then a week because of the Patriots' coronavirus cases. 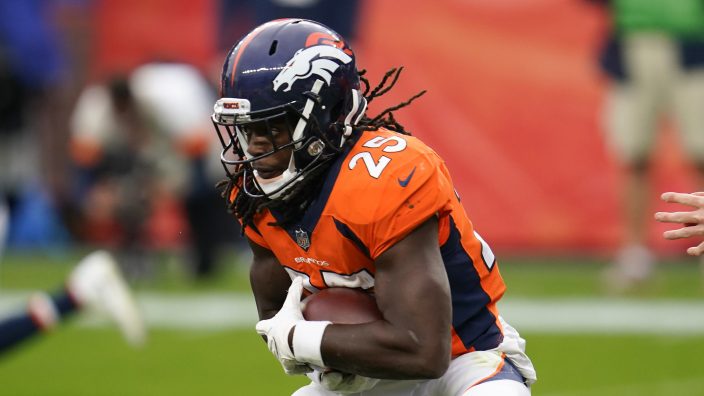 FILE - In this Sunday, Sept. 27, 2020, file photo, Denver Broncos running back Melvin Gordon runs with the ball during the second half of an NFL football game against the Tampa Bay Buccaneers, in Denver. Gordon wasn't at practice Wednesday, Oct. 14, 2020, after being cited for driving under the influence and speeding by Denver police the night before. (AP PhotoDavid Zalubowski, File)

“I watched a lot of football when I was hurt, and I watched a lot of older guys and how they don’t take sacks," Lock said. “They know they’re going to get sacked and they know where their outlet is in order to get rid of the ball. Whether that’s an automatic incompletion when you throw it at the running back’s feet or you sail one out of bounds.”

That's never been Lock's style, but it’s something he promises to integrate into his game.

Lock said he realizes he got hurt at Pittsburgh in Week 2 by “making the dumb decision and not just taking the sack.” 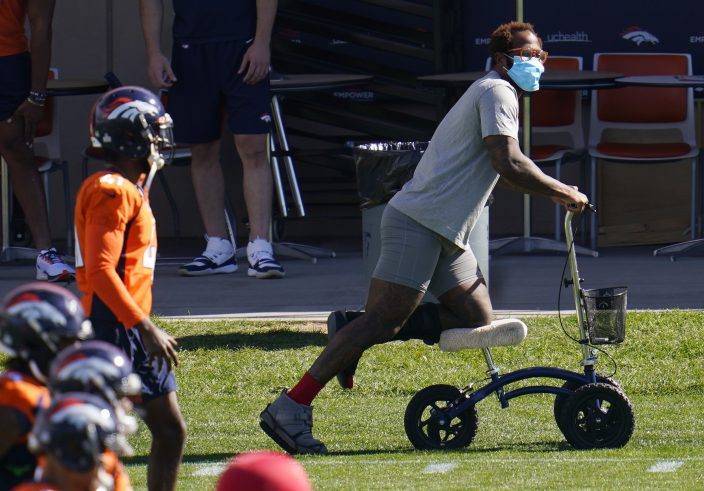 Injured Denver Broncos outside linebacker Von Miller uses a scooter to maneuver around as his teammates warm up before taking part in drills during an NFL football practice Wednesday, Oct. 14, 2020, at the team's headquarters in Englewood, Colo. (AP PhotoDavid Zalubowski)

Several Broncos grouched about losing their bye week when the NFL moved their game against the Patriots to this weekend. 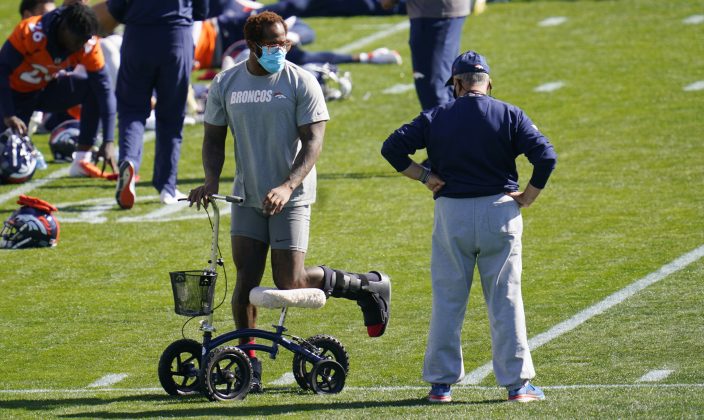 “I’m upset that our game was canceled, we had a little (change) in schedule and lost our bye week later in the year,” Lock said. “But I’m also excited that it means I miss fewer games than I was supposed to, and that makes me happy.”

Had the game been played as scheduled last weekend, Brett Rypien would have made his second start in place of Lock, who sprained his throwing shoulder when he was dragged down from behind by Steelers linebacker Bud Dupree on Sept. 20.

It was the second significant injury for the 2019 second-round pick who missed the first three months of his rookie season after spraining his right thumb in the preseason, also on a sack.

Rypien beat the Jets in his NFL debut two weeks ago despite throwing three interceptions.

The Broncos haven’t played since Oct. 1, so they’ll have had 16 days between games, one day longer than Tennessee’s layoff before the Titans beat Buffalo on Tuesday night following the NFL’s first COVID-19 outbreak, which affected two dozen members of the Titans organization.

The Broncos’ layoff is the longest in the league since 2001, when the NFL postponed all games the weekend following the 9-11 terrorist attacks. Three teams -- the Saints, Steelers and Buccaneers -- had byes when play resumed a week later, so they all had 20 days between games that year.

Unlike last year, when he had to rely on virtual reality technology for mental reps while on injured reserve, Lock didn’t go on IR this time so he could continue to attend practices.

So, he’s able to step right back in and focus on the game plan this time around while also implementing what he learned about avoiding sacks and injuries during his recovery.

“I think a better word than ‘art’ is ‘instinct,’” coach Vic Fangio said. "And hopefully that is something that will come through playing, and playing more snaps and being put in that position.

“Because both of the times that he was hurt have been very similar, where he was outside the pocket and going down. So, I think it becomes instincts and I think it's good that he's studied other players who have been able to avoid it.”

Melvin Gordon III returned to practice Thursday and might not face any additional discipline from the Broncos after Denver police cited him this week for driving under the influence.

Fangio said the league can already hand down a stiff punishment.

The revised collective bargaining agreement calls for three-game suspensions in standard DUI cases. If Gordon is suspended three games, it would cost him $176,471 in salary and the team might also recoup $375,000 of his $4 million signing bonus.

“We'll make a decision as it relates to us by game time,” Fangio said.

The Broncos would have to pay Gordon his $58,824 game check if they held him out on their own.

Von Miller was at practice this week, watching from a scooter. Miller had his cast removed from his surgically repaired left ankle last week and aims to return to action for the final four games.