Myles Garrett has moved on from the ugly, regrettable moment that chases him still.

He hopes the Pittsburgh Steelers have put his helmet-swinging attack on quarterback Mason Rudolph behind them as well.

“Their head coach said they are past it,” Garrett said Friday. "We're past that as a team. We are just ready to go out there and play ball.” 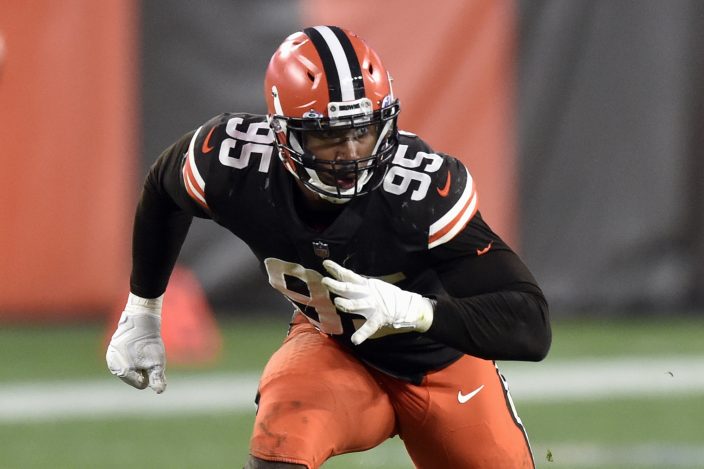 FILE - In this Sunday, Oct. 11, 2020, file photo, Cleveland Browns defensive end Myles Garrett (95) rushes the passer during an NFL football game against the Indianapolis Colts in Cleveland. On Sunday, Garrett will face his past and the Steelers for the first time since Nov. 14, when the Browns defensive end let his emotions overpower him and he ripped off the helmet of Pittsburgh's Mason Rudolph and bashed the quarterback over the head. (AP PhotoDavid Richard, File)

On Sunday, Garrett comes face to face with a professional low point and the Steelers for the first time since last Nov. 14, when the Browns star defensive end let his emotions overpower him.

In the frantic closing seconds of Cleveland's 21-7 win at home over the Steelers, Garrett ripped off Rudolph's helmet and bashed the quarterback over the head with it, triggering a melee between the teams that led to suspensions, fines and accusations of racism.

Garrett was suspended six games by the NFL and had his reputation permanently stained. 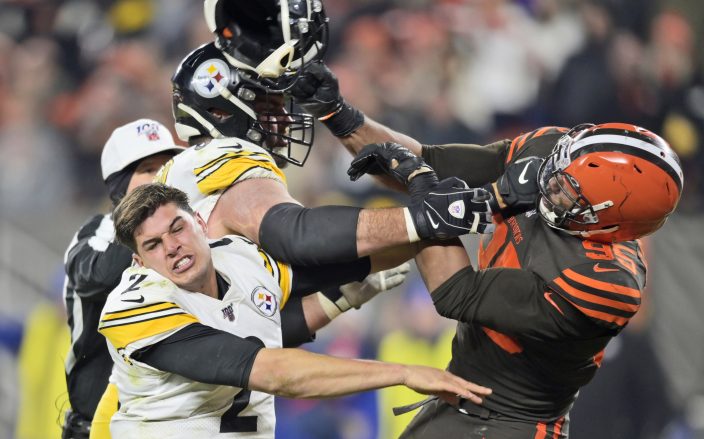 FILE - In this Nov. 14 2019, file photo, Cleveland Browns defensive end Myles Garrett (95) hits Pittsburgh Steelers quarterback Mason Rudolph (2) with a helmet during the second half of an NFL football game in Cleveland. On Sunday, Garrett will face his past and the Steelers for the first time since Nov. 14, when the Browns defensive end let his emotions overpower him and he ripped off the helmet of Pittsburgh's Mason Rudolph and bashed the quarterback over the head. (AP PhotoDavid Richard, File)

But as he readies to play in one of the bigger games since the Browns drafted him No. 1 overall in 2017, Garrett has a plan if the Steelers try to retaliate.

“Just play within the whistle,” he said. "Do not be worried about what they are doing to frustrate or knock us off our game. I think they are going to play a clean, fair game and we are going to do the same.”

Garrett's trip to Heinz Field has been a subplot this week, even though the Browns will be facing veteran Ben Roethlisberger instead of Rudolph, his backup. Both teams tried to downplay the significance of the visit, but it's been impossible to ignore and will likely be brought up every time Garrett plays the Steelers.

Garrett feels if the Browns, who are off to their best start in nearly three decades, can find a way to get to Roethlisberger, they can end their 16-game losing streak in Pittsburgh.

“We have some confidence going in and I know they are confident with the record they have and it will be a good AFC matchup,” he said. "I believe in the guys we have in our room and I think we can beat them.”

Following the confrontation with Rudolph, who initially tried to pry off his helmet while on the ground, Garrett said he reacted so violently because the quarterback called him a racial slur. He told the league the same thing when he contested the season-ending punishment.

The league said an investigation found no evidence Rudolph used the slur.

“Have not thought about it,” he said. "Focused on how I am going to get to Ben. I will cross that bridge when I come to it, whether that is down the road or whenever we see each other. I am focused on the game plan and getting the win. That comes secondary.”

Rudolph has denied Garrett's claim, and earlier this week Steelers coach Mike Tomlin refused to get drawn into any talk about what transpired.

"There is a lot on the table to this game in reference to stakes,” Tomlin said. “They are a 4-1 team. We’re trying to remain undefeated. We’re not looking for that low-hanging fruit or reality TV storylines.

Garrett agrees. A victory at Pittsburgh could signal the Browns' arrival as real contenders.

“This will be a defining game for both of us,” he said. "How the rest of the season plays out will probably be resting on this game because of how much importance it plays for where we will be at in the division and who will fall.

"We get a win there, most people will give us some respect this year to see us a legit team across the league and from then on we have to prove it week in and week out.”

Because of COVID-19 restrictions, there will only be 5,500 fans in Heinz Field and that alone will lessen the hostility directed at Garrett.

Still, he knows he's not welcome.

Once the game begins, emotions will be elevated and Garrett feels he's better prepared to handle them this time.

“I am just ready to play between the six seconds that the average play lasts,” he said. "After that, that is on them. I am not worried for any situation that we have and whenever we have to snap the ball again I will be there.”

With President Joe Biden on the ve ...