Starting quarterback Devin Leary could miss the rest of the regular season for No. 23 North Carolina State after having surgery Sunday for a leg injury suffered in a win against Duke.

In a post on the program’s Twitter account, the school said Leary had surgery a day after breaking the fibula bone in his left leg. He is expected to miss four to eight weeks.

N.C. State (4-1, 4-1 Atlantic Coast Conference) is halfway through its league schedule, with a nonconference game against Liberty and an open week still ahead. 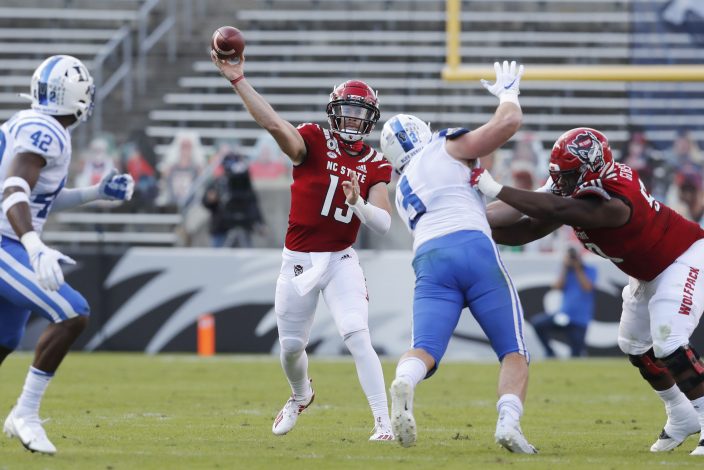 Entering the Duke game, Leary had won two consecutive road games since retaking his starting job lost due to missed preseason workouts from COVID-19 contact tracing. But he was knocked from Saturday's game after taking a hard hit on a keeper from Duke’s Lummie Young IV — who was ejected for targeting — and Leary’s leg bent awkwardly beneath him.

He offered a thumbs-up while being carted off with 55 seconds left in the third quarter. He later returned to the sideline on crutches and wearing a protective boot.

Bailey Hockman, who started the first two games, played in relief of Leary.

N.C. State, which entered the AP Top 25 on Sunday, visits rival North Carolina next Saturday. The 14th-ranked Tar Heels fell nine spots after Saturday night’s loss at unranked Florida State. It will be the first meeting with both teams ranked in the poll since 1993.