The mood of the bearded spectator in the New York Jets jersey was tough to judge as he sat in the stands during the fourth quarter Sunday, because he wore a sack over his head with only the eyes exposed. Plus a protective pandemic mask over his mouth.

The winless Jets reached a new low Sunday when they were shut out by AFC East rival Miami for the first time in 38 seasons, losing 24-0. 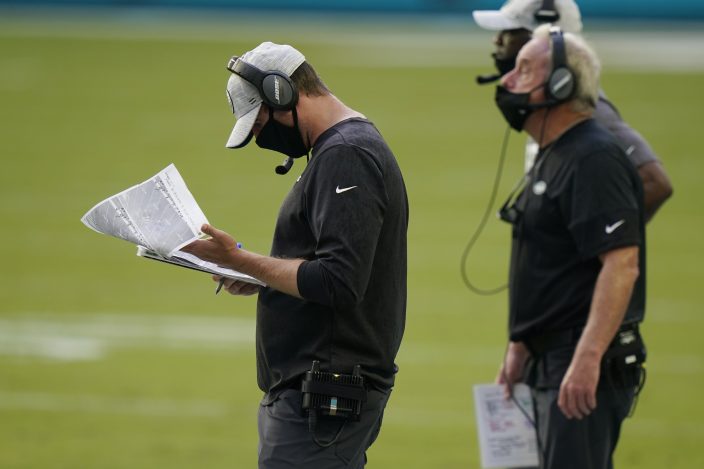 The dismal offensive showing left the Jets (0-6) as the NFL's lone winless team and turned up the heat on play caller Gase, who also happens to be their head coach.

He said he wasn't worried that his job might be in jeopardy.

“I'm not even thinking about it,” he said. “I have to focus on making sure our guys are ready to go.” 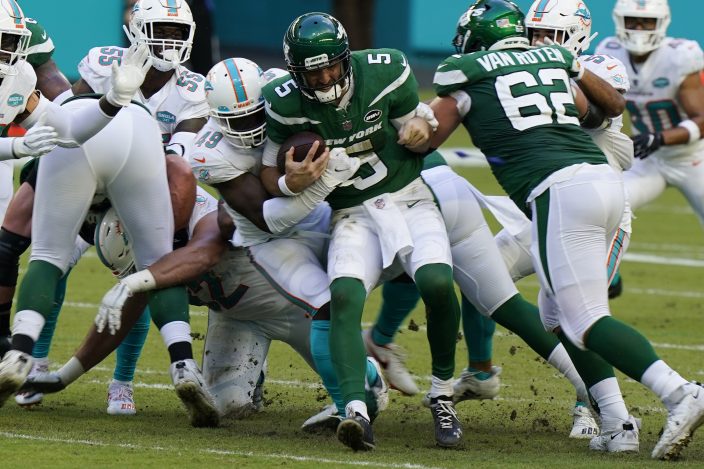 They weren't against the Dolphins, who blanked their division rivals for the first time since the January 1983 AFC championship game, which Miami won 14-0.

Gase and his players insisted morale remains high despite signs to the contrary. Last week, disgruntled running back Le’Veon Bell was released, and defensive coordinator Gregg Williams spoke of the burden the sputtering offense has created. 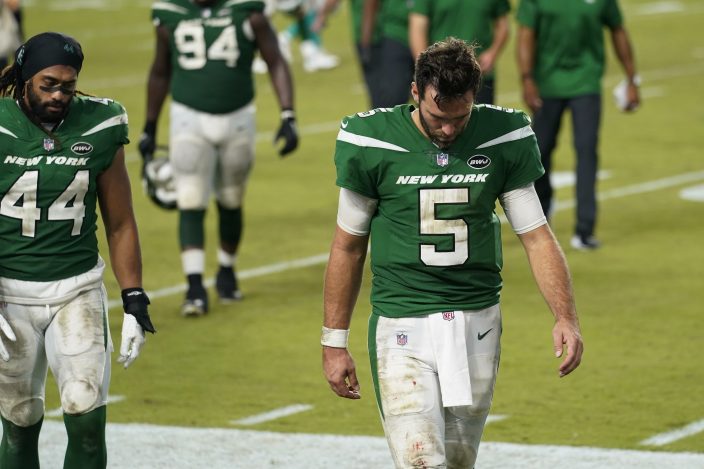 New York Jets quarterback Joe Flacco (5) and linebacker Harvey Langi (44) walk off the field during the end of an NFL football game against the Miami Dolphins, Sunday, Oct. 18, 2020, in Miami Gardens, Fla. The Dolphins defeated the Jets 24-0. (AP PhotoLynne Sladky)

“We talked about it,” Gase said. “He was trying to talk about complementary football, the three phases playing together. I wasn’t happy about it; we talked about it. Everything we say matters. He understood we’ve got to set the right example.”

Then, once again, the sputtering offense put a burden on the defense.

Joe Flacco, making his second consecutive start in place of the injured Sam Darnold, overthrew an open receiver deep on the first series, and things went downhill from there. The Jets were 0 for 12 on third downs until they finally converted one with less than 11 minutes left.

Flacco was under heavy pressure all day, including when he was sacked for a 28-yard loss that took the Jets out of field-goal range. They also squandered a scoring chance when the ball was snapped before Flacco was ready on third down.

It was enough to make Jets fans, including the guy with the sack on his head, wonder why the 35-year-old Flacco would want to endure such frustration.

“You’ve got to look at yourself in the mirror and ask yourself what drives you and why you do this, and do you love this game?” Flacco said. “It starts with keeping your head held high and sticking together.”

Another veteran, running back Frank Gore, uncharacteristically used profanity as he described the frustration.

“It’s tough. I'm sick of it, man,” Gore said. “Nobody wants to lose. We practice hard every day; you can't tell it's an 0-6 team. Nobody puts their head down. We’ve just got to do it on Sundays.”

So far they're not coming close. The Jets have been outscored 185-75, with every loss by more than a touchdown in their worst start since 1996.

“It’s a new day, a new week,” defensive back Marcus Maye said. “I don’t think anybody has the mindset of giving up. I definitely don’t.

"I know that sounds like a broken record almost.”