Congress is past the point at which it can deliver more coronavirus relief before the election, with differences between House Speaker Nancy Pelosi, her Senate Republican rivals and President Donald Trump proving insurmountable despite the glaring needs of the country.

Trump’s GOP allies are reconvening the Senate this week to vote on a virus proposal, but it's a bill that failed once before, and that Trump himself now derides as too puny. The debate promises to bring a hefty dose of posturing and political gamesmanship, but little more.

Even the architect of the Senate measure, Majority Leader Mitch McConnell, R-Ky., isn’t claiming the vote will advance the ball. Once the measure fails, he plans to turn the chamber's full attention to cementing a 6-3 conservative majority on the Supreme Court by confirming Judge Amy Coney Barrett. It is likely to be the Senate's final act before Election Day. 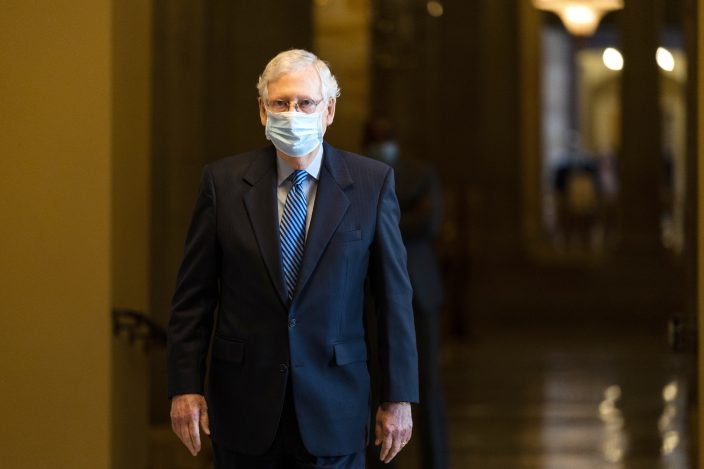 FILE - In this Oct. 1, 2020, file photo Senate Majority Leader Sen. Mitch McConnell of Ky. walks towards the Senate floor on Capitol Hill in Washington. New virus relief will have to wait until after the November election. The architect of the Senate measure, McConnell, isn’t claiming the vote will advance the ball. Once the measure fails, he plans to turn the chamber's full attention to cementing a 6-3 conservative majority on the Supreme Court by confirming Judge Amy Coney Barrett. (AP PhotoManuel Balce Ceneta, File)

In that context, this week’s vote has the chief benefit of giving Republicans in tough reelection races one last opportunity to try to show voters they are prioritizing COVID relief — and to make the case to voters that Democrats are the ones standing in the way.

McConnell is resurrecting a measure in the $650 billion range that would repurpose $138 billion in small business subsidies to provide a second round of paycheck relief, add $300 per week in supplemental unemployment benefits, and help schools and universities reopen. The last version of the bill left out help for states and local governments sought by Democrats and another round of $1,200 direct payments demanded by Trump.

The last coronavirus relief package, the $1.8 trillion bipartisan CARES Act, passed in March by an overwhelming margin as the economy went into lockdown amid fear and uncertainty about the virus. Since then, Trump and many of his GOP allies have focused on loosening social and economic restrictions as the key to recovery instead of more taxpayer-funded help.

Trump has been anything but consistent. He now insists that lawmakers should “go big” with a bill of up to perhaps $2 trillion, a total reversal after abandoning the talks earlier this month. But Trump’s political problems aren’t swaying Senate Republicans.

“He’s talking about a much larger amount than I can sell to my members,” McConnell said.

The most recent bill from House Democrats weighs in at $2.4 trillion — or more than $2.6 trillion when excluding a $246 billion tax increase on businesses that's unlikely to gain GOP acceptance. The package is a nonstarter with Senate Republicans and McConnell, who is making the case for a more targeted approach that’s well south of $1 trillion.

The moment is challenging for Pelosi as well. For months she has been promising a COVID relief package of more than $2 trillion stuffed with Obama-era stimulus ideas. Even though the Senate and White House are both in GOP hands — and will be at least into January — she has sharply rebuffed anyone who suggests that Democrats should take a smaller deal now rather than risk going home empty-handed until next year.

“This is not the time to say, ‘Okay, let’s fold.’ This is what we have been building up to,” Pelosi told fellow Democrats on a recent teleconference. She said Sunday that she remains optimistic of reaching an agreement with the administration but that a deal would have to come within 48 hours — or Tuesday — for it to be enacted by Election Day.

Taking a smaller bill now would likely require Pelosi to give up tax cuts for the working poor and accept a far smaller aid package for states and local governments. But it would also mean that relief would flow immediately to millions of workers whose supplemental unemployment benefits were cut off this summer.

When an aid bill finally passes may depend on the outcome of the election.

If Trump loses, Congress is likely to stagger through a nonproductive lame-duck session comparable to the abbreviated session after the decisive 2008 Obama-Biden victory or the 2016 session that punted most of its leftovers to the Trump administration. That scenario would push virus aid into 2021.

Delays in coronavirus aid come as the recovery from this spring’s economic shutdown is slowing and as the massive stimulus effects of the $1.8 trillion March relief measure wear off. COVID cases are spiking again heading into a third wave of the pandemic this winter. Poverty is climbing and the virus is continuing to take a disproportionate toll on minority communities.

“If Congress doesn’t act the next administration is going to inherit a real mess,” said Harvard economist Jason Furman, a former top Obama adviser. “Economic problems tend to feed on themselves.” He is in the Democratic camp that prefers imperfect stimulus now rather than a larger package in four months or so.

Instead, if history repeats, COVID relief is likely to be the first major item out of the gate next year, but it’s not clear even then that it’ll be as big as Democrats hope.

“Pelosi decided in July that the political benefit of the next package would accrue to the president’s benefit and therefore she was going to lay out the most aggressive terms possible,” said veteran GOP Rep. Patrick McHenry of North Carolina, who predicts that Pelosi won’t get much more next year than she could have gotten now “unless they’re willing to break the filibuster for a $3 trillion bailout for blue states.”