Back in the Champions League after a 25-year gap, Ferencváros aims to revive its even longer European history while facing Cristiano Ronaldo and Lionel Messi.

There was a time when the Hungarian champion beat Juventus in a European final and its star forward won the Ballon d’Or as the continent’s best player.

When the club last reached a European final — eliminating Liverpool on the way in the 1974-75 Cup Winners' Cup — it lost to Dynamo Kyiv, where current Ferencváros coach Serhiy Rebrov is remembered as one its greats. 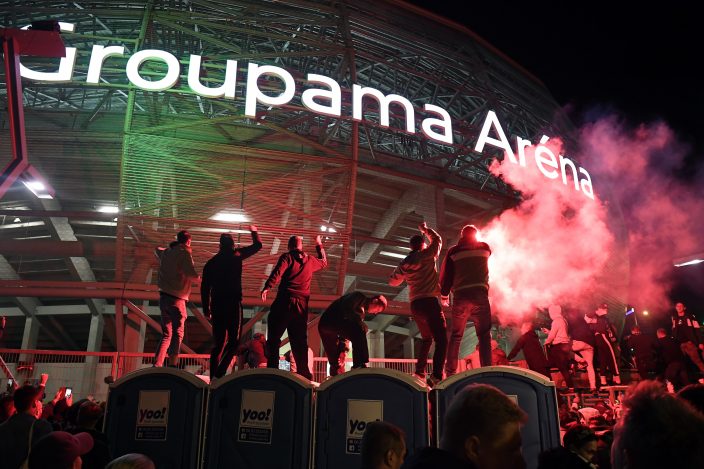 FILE - In this Tuesday, Sept. 29, 2020 file photo, fans of Ferencvaros celebrate after the soccer Champions' League playoff second leg match between Ferencvaros and Molde FK outside Groupama Arena, in Budapest, Budapest, Hungary. Hungarian champions Ferencvaros return this week to European soccer's biggest stage after a 25-year gap looking to revive a proud history. Ferencvaros beat Juventus in a European final in the 1960s and its star player then won the Ballon d’Or as the continent’s best. (Tamas KovacsMTI via AP, file)

So it is fitting that on Tuesday Ferencváros returns to the Champions League for the first time since 1995, and after four qualifying rounds since mid-August, in a group with Juventus and Dynamo.

The adventure starts away to Barcelona for the team from Budapest ranked No. 118 in Europe by UEFA, the lowest of the 32 teams in this season’s competition.

“We are very, very proud to reach this level,” Ferencváros chief executive Pál Orosz said in a telephone interview, suggesting his is “a classic Europa (League) group-stage club.”

“We all wanted big names ... but this is a bonus for us,” said Orosz, whose father, also called Pál, played in the 1965 Inter-Cities Fairs Cup title win over Juventus in Turin.

Ferencváros heads to Barcelona fit for a bigger test. The Hungarian league leader is unbeaten in a season that started two months ago with a win over Djurgårdens of Sweden in the Champions League first qualifying round.

Orosz acknowledges “there is a huge gap” between his club, known affectionately to fans as Fradi, and the multi-national brands of Barcelona and Juventus.

The entire Ferencváros squad is valued at less than 25 million euros ($29 million) by one transfer analysis website — equivalent to a few months’ wages for upcoming opponents Lionel Messi and Cristiano Ronaldo.

“This is our club. We are one team, we are not about individuals,” said Orosz, pointing to good scouting as a reason not to fear wealthier rivals who now try to sign his players.

The scorer of winning goals in two Champions League qualifying rounds, Tokmac Nguen was recruited from Norway where his family moved after being refugees from South Sudan.

Rebrov also was a smart hire. The former Tottenham forward coached only in Saudi Arabia after leaving Dynamo Kyiv, which he once led to the Champions League round of 16.

“He is very serious, not so extrovert,” Orosz said of the 46-year-old coach. “It’s a very, very good stage in his career. He’s having a good time.”

Kubatov is a campaign strategist for the Fidesz party led by Prime Minister Viktor Orban, who a decade ago made a priority of state funding for sport and tax credits for businesses to invest.

The plan was to restore pride in Hungarian soccer: An era of the Mighty Magyars who reached the 1954 World Cup final with Ferenc Puskás, and won the 1964 Tokyo Olympics title.

Dynamo Kyiv will be hosted in its 22,000-capacity home that opened in 2014, and hosted the 2019 Women's Champions League final. It was built on the site of a venue named for club icon Flórián Albert, who was voted Ballon d’Or winner as Europe’s best player in 1967.

The new arena changed the perception and behavior of the club, Orosz said, though the club will move to the national stadium for its marquee games.

“I think the tickets will be sold in a day,” Orosz said. “Everybody was waiting for success like this and games like this.”