At LIV, one of the most glamorous, star-studded nightclubs in one of the world's biggest party destinations, there's a velvet-roped VIP area, and then there's a secret VIP area. The parties at the club are so legendary they have inspired lyrics from Drake, Kanye West and Rick Ross. High rollers spend up to $20,000 just for a table.

Today, LIV sits quiet and empty — a casualty not just of the coronavirus outbreak but of a power struggle between state and local government over how to contain the scourge.

On a recent Friday, the sleek black floors and curved silver snakeskin couches were a sad sight in the harsh light of day. A bottle of hand sanitizer rested on top of the DJ booth, where back in February a man shelled out $120,000 just to sit there during a performance by Cardi B. 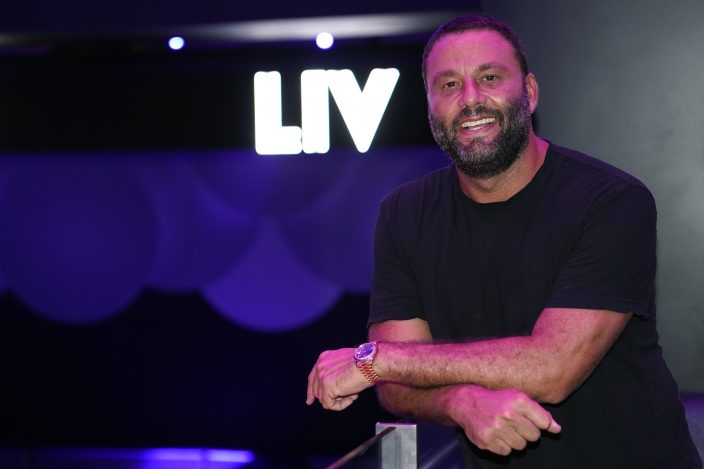 LIV owner David Grutman poses for a photograph at the nightclub, Wednesday, Oct. 14, 2020, in Miami Beach, Fla. LIV, one of Miami's most glamorous, star-studded nightclubs sits empty and quiet these days, a casualty of both the coronavirus outbreak and a power struggle between state and local government over how to contain the scourge. (AP PhotoLynne Sladky)

The puppeteer behind the parties and arguably the king of South Beach's nightlife scene, LIV owner David Grutman, stopped by a few months ago to look at new upholstery, but he mostly stays away from the club at the center of his hospitality empire.

“I cried real tears,” the 46-year-old Grutman said of his last visit to the shuttered club and nightlife's seemingly bygone era. “It’s really been my lifeblood.”

Technically, LIV and Miami's other nightclubs could reopen at 50% capacity under an ordered issued Sept. 25 by Gov. Ron DeSantis. But Miami leaders have imposed a midnight curfew — a real buzzkill for a scene that doesn't even get started until the a.m. hours — and are restricting loud music so that people don’t have to shout and risk spreading the virus through their spittle. 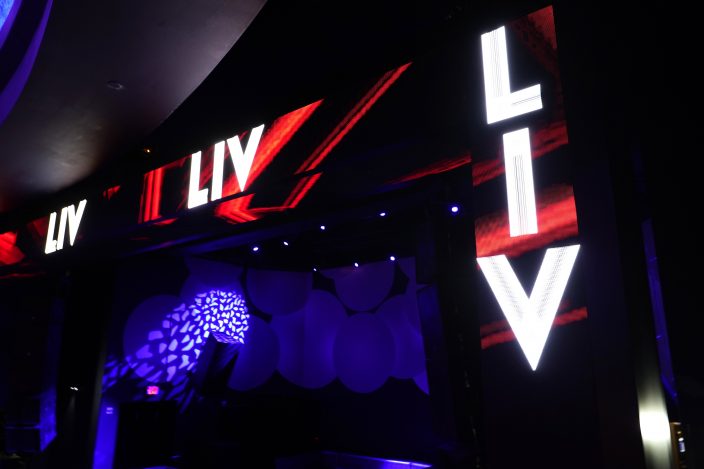 Lights are illuminated at an empty LIV nightclub Wednesday, Oct. 14, 2020, in Miami Beach, Fla. LIV, one of Miami's most glamorous, star-studded nightclubs sits empty and quiet these days, a casualty of both the coronavirus outbreak and a power struggle between state and local government over how to contain the scourge. (AP PhotoLynne Sladky)

Also, a local mask ordinance requires patrons to keep their faces covered except while eating and drinking — though the governor has barred municipalities from collecting fines for violations.

“We take a more cautious approach here in Miami-Dade,” Miami-Dade County Mayor Carlos Gimenez said recently. He warned: “We are still not out of the woods."

While a few small clubs in Miami have reopened, Grutman said that between the curfew and the continued risk of spreading the virus, he has no plans to open LIV or his other nightclub, Story.

Lights shine on an empty LIV nightclub Wednesday, Oct. 14, 2020, in Miami Beach, Fla. LIV, one of Miami's most glamorous, star-studded nightclubs sits empty and quiet these days, a casualty of both the coronavirus outbreak and a power struggle between state and local government over how to contain the scourge. (AP PhotoLynne Sladky)

“We’re going to open it when we can give the right experience," he said. "I’m not into giving half-ass experiences.”

Florida has seen more than 15,000 deaths from the pandemic. The Republican governor has been eager to jumpstart the economy, battered by shutdowns and other restrictions that have left hundreds of thousands unemployed in the tourist-dependent state.

Grutman has already been through a revolving door of openings and closings.

In addition to the clubs, he has several restaurants, including one he owns with the singer Pharrell, plus the celeb hangout Komodo. All of them were forced to close back in March by state and local authorities.

In June, the governor gave the go-ahead for restaurants to reopen at limited capacity. With bars still under shutdown orders, people were soon drinking heavily and dancing at Komodo and other late-night restaurants.

“We thought the world was back,” Grutman said. “I was naive enough to think that we'd turned the corner."

But he voluntarily closed again after six weeks, as cases skyrocketed and South Florida become one of the nation's COVID-19 hot spots, with as many as 12,000 to 15,000 newly confirmed infections per day. Grutman said he didn't want to contribute to the spread, and he was also seeing a backlash from others in the industry.

“We were allowed to reopen and bars were not, yet people were drinking like crazy at our place, so it was one of those mixed-signal things. It built up a lot of animosity," he said.

On a recent Friday night at Komodo, Grutman dined with the Canadian singer The Weekend, while former baseball star Alex Rodriguez sat nearby and supermodel Adriana Lima was at another table. Yet mask-wearing was strictly enforced, hand sanitizers were at every table, and the scene shut down promptly at 11 p.m.

Meanwhile, LIV, where stars like Justin Bieber and Jennifer Lopez have been known to give unpaid, impromptu performances, sits forlorn.

Before the pandemic, more than 10,000 partygoers visited each week, and those who couldn't get in hung out at the lobby bar of the Fontainebleau Hotel just to be close to the action.

On big weekends, LIV — pronounced like the woman's name Liv — raked in over $1 million a night, more than half from champagne and the bling that accompanied the bottle presentations, including confetti cannons, nitrogen smoke plumes and scads of scantily dressed servers.

When the Kansas City Chiefs won the Super Bowl in Miami this year, the team spent the evening hoisting their trophy amid a spray of champagne and confetti on the dance floor at LIV. At a fashion show at LIV in 2009, Victoria’s Secret supermodels strutted in their angel wings and barely-there lingerie.

Grutman has fielded countless calls from DJs begging to be the first when the club reopens. Others have asked to host Zoom parties from LIV, but Grutman just isn't into it.

He is looking into five-minute rapid testing and putting ultraviolet disinfecting lights inside the vents but thinks it's unlikely big club events will be safe without a vaccine.

“Everybody has their own ideas of what’s going to happen, second wave, no second wave," he said.

In the meantime, Grutman — the hype man, the energy pumper, the one injecting that party-all-the time vibe — is missing out on the action, which has shifted to house parties.

"I’d rather be the ringmaster of it," he said.