Greece’s government says it has finalized plans to extend a wall along its northeast border with Turkey, over concerns that migrants may try to stage mass crossings into the European Union country.

Government spokesman Stelios Petsas said Monday that 26 kilometers (16 miles) of wall would be added to an existing 10-kilometer (six-mile) section in a 63-million-euro ($74 million) project due to be completed by the end of April.

A standoff occurred at the border earlier this year after Turkey said it would no longer prevent migrants trying to reach the EU, and tens of thousands tried to cross into Greece. 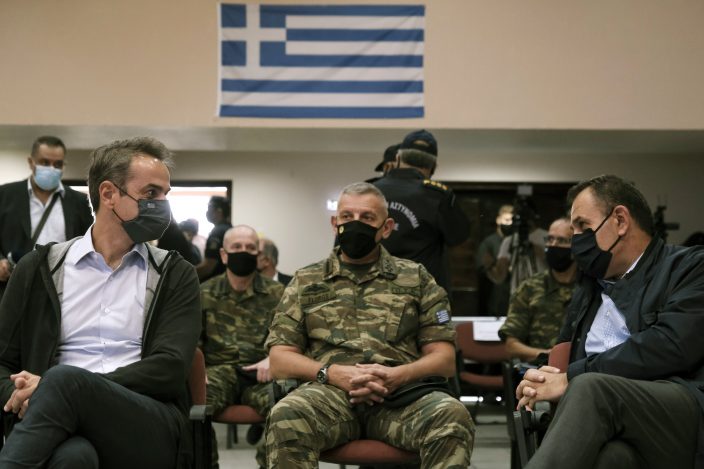 Greece's Prime Minister Kyriakos Mitsotakis, left, Greek Defense Minister Nikos Panagiotopoulos, right, and Armed Forces chief Lt. Gen. Konstantinos Floros, attend a presentation of the proposed construction of a new part of a fence which will be built at the border with Turkey, in Alexandroupolis, northern Greece, Saturday, Oct. 17, 2020. Greece decided to strengthen its land border with Turkey after the latter attempted to steer tens of thousands of migrant across into Greece last March. (Dimitris PapamitsosGreek Prime Minister's Office via AP)

The two countries are also at odds over energy rights in the eastern Mediterranean in a dispute that has triggered a dangerous military buildup in the region and fears of conflict.

Four Greek construction companies have been selected to build the new wall and upgrade the existing section of fencing, running along or close to the Evros River, which forms much of the border between the two countries.

The wall will be made using galvanized square steel tubes and concrete foundations, according to Greece’s public order ministry.

Prime Minister Kyriakos Mitsotakis visited the border region on Saturday after a test installation of a section of the new wall.

The number of migrants and refugees traveling from Turkey to Greece fell sharply this year during the pandemic and after the border standoff prompted tougher border policing. Turkey has accused Greece of illegally pushing back migrants reaching its islands in the eastern Aegean Sea, a charge that Athens denies.

Turkey hosts the largest number of refugees worldwide, at nearly 4 million people, mostly from Syria, according to the U.N. Refugee Agency.

Copa America in Brazil up to 140 virus cases

Turkey: Survey ship at heart of Med row at port for resupply