Military leaders from Libya’s warring sides met Monday in Geneva in hopes of a U.N.-brokered breakthrough that could pave the way for a “complete and permanent cease-fire” in the conflict-ridden North African country.

The meeting marks the fourth round of talks involving the Joint Military Commission under the watch of the head of the United Nations support mission for Libya, former U.S. State Department official Stephanie Williams.

U.N. organizers say the round is expected to run through Saturday, and Williams’ mission “hopes that the two delegations will reach a solution to all outstanding issues in order to achieve a complete and permanent cease-fire across Libya.” 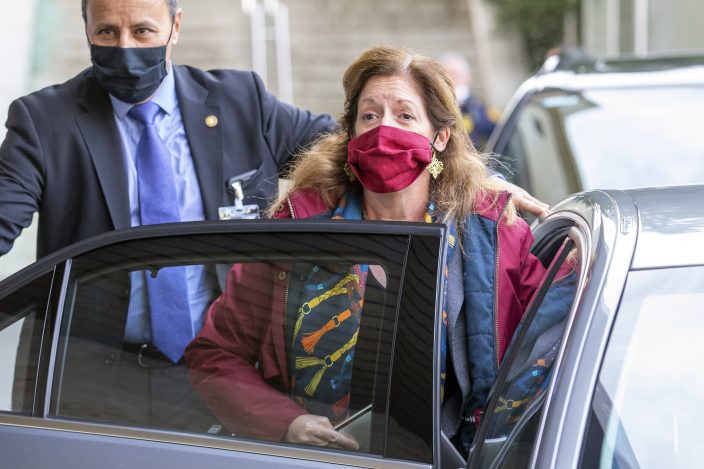 Stephanie Williams, the head of the United Nations support mission for Libya and former U.S. State Department official, wearing a protective face mask against the spread of the coronavirus leaves the building after a meeting of the fourth round of the Libyan Joint Military Commission, at the European headquarters of the United Nations in Geneva, Switzerland, Monday, Oct. 19, 2020. Military leaders from Libya’s warring sides met Monday in Geneva in hopes of a U.N.-brokered breakthrough that could pave the way for a “complete and permanent cease-fire” in the conflict-ridden North African country. (Salvatore Di NolfiKeystone via AP)

The meetings make up the security aspect of three-track talks, also involving political and economic tracks, that are aimed at lifting Libya out of its grueling conflict that has ground on nearly ever since the fall of Moammar Gadhafi in 2011.

Speaking at the start of the talks, Williams told the two sides that their success in these talks would have a positive effect on the political and economic tracks of the ongoing U.N.-brokered discussions aimed at ending the years-long Libya conflict.

Williams, who met Friday with Russian Foreign Minister Sergey Lavrov in Moscow, said encouraging separate meetings were held with the two delegations in the past two days.

The Geneva-based military talks come ahead of a political forum in Tunisia in November. That forum aims to “generate consensus on a unified governance framework and arrangements that will lead to the holding of national elections,” the U.N. mission said.

Last month, the two sides reached preliminary agreements to exchange prisoners and open up air and land transit across the country’s divided territory. This breakthrough also accompanied the resumption of oil production after a months-long blockade by powerful tribes allied with army commander Khalifa Hifter.

Hifter’s forces launched an offensive in April 2019 to try and capture Tripoli, the seat of the U.N.-supported government in the west. But his campaign collapsed in June.

Fighting has since died down amid international pressure on both sides to avert an attack on the strategic city of Sirte, the gateway to Libya’s major oil export terminals.

After weathering criticism for cer ...

UN: Little time left to save millions of starving Yemen ...

The window to prevent a famine in ...