They don't throw parades for teams that are 3-3, not even the Miami Dolphins, which is why Brian Flores declined to bask in his personal milestone Monday.

A .500 winning percentage is the high-water mark for the Dolphins' second-year coach, which merely reinforces his belief they can become even better than average.

“There are a lot of things we can improve on,” Flores said. “Really that’s where my focus is — just to get this team better. We’ve got a long season ahead of us.” 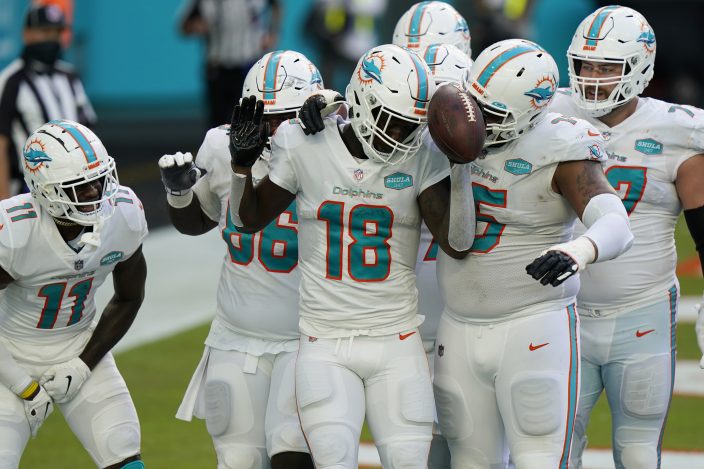 Miami Dolphins wide receiver Preston Williams (18) is congratulated by his teammates after scoring a touchdown, during the first half of an NFL football game against the New York Jets, Sunday, Oct. 18, 2020, in Miami Gardens, Fla. (AP PhotoLynne Sladky)

The Dolphins have won back-to-back games by 20 points or more in a single season for the first time since 1990. That includes their first shutout in six years, a 24-0 victory Sunday against the New York Jets.

Reshuffling of the NFL schedule because of coronavirus outbreaks elsewhere pushed the Dolphins’ bye to this week, and their next game will now be Nov. 1 at home against the Los Angeles Rams.

The Dolphins head into their break second in the AFC East, sandwiched behind Buffalo but ahead of New England and the Jets. 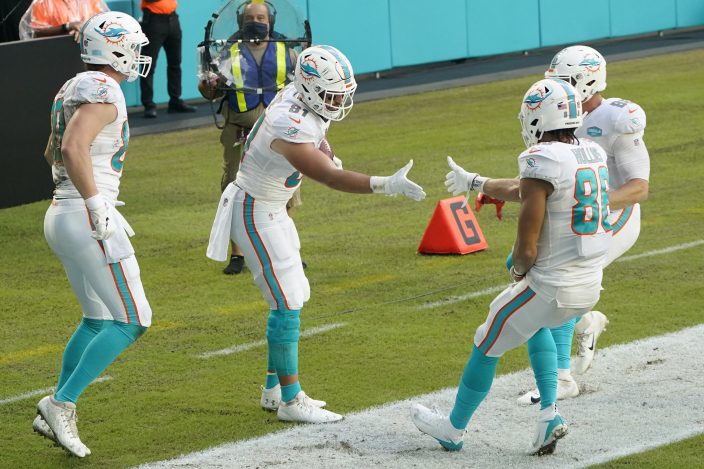 The Dolphins rank third in the NFL in points allowed per game at 18.8, a dramatic improvement from last year's 30.9, when they surrendered the most points in franchise history.

They've held two consecutive opponents to less than 150 yards passing for the first time since 2010. They lead the league in third-down defense at 31%, including the Jets’ 2 for 17.

Newcomer Emmanuel Ogbah has revitalized the pass rush with five sacks, and Xavien Howard is tied for the NFL lead with four interceptions — one in each of the past four games

The Dolphins are on pace for their highest-scoring season since 1986, averaging 26.7 points per game, but continue to squander chances.

Ryan Fitzpatrick threw three first-half touchdown passes against the Jets, but four other possessions that ended in opposing territory produced only three points.

The Dolphins were 0 for 8 on third downs with Fitzpatrick. Their only third-down conversion came on a completion by rookie Tua Tagovailoa in mop-up duty.

Tagovailoa made his NFL debut when he entered the game with 2:27 left, capping his comeback from a serious hip injury that ended his Alabama career last November.

The crowd roared, and there were cheers in Tuscaloosa, too.

"It was a big injury. I was right there when it happened,” Alabama running back Najee Harris said. “So for him to overcome all that, overcome the doubters, step on the field and make plays, it’s inspiring for folks.”

By keeping the Jets winless, the Dolphins hurt their chances of landing Clemson quarterback Trevor Lawrence with the first pick of next year's draft. Miami has Houston's first- and second-round picks in 2021, and the Texans are 1-5.

8-7 — That's the Dolphins' record since losing their first seven games under Flores in 2019.

The Dolphins haven't had a COVID-19 case since August, and they'll face the challenge of continuing that streak through the bye week.

“Distancing, masks, not being in large groups -- those are the things we harp on,” Flores said, “especially during a bye week when we’re not going to be in the facility every day, and they won't be on their normal routine. We have to be smart as a team. I think they all understand that.”

Tua gets off the bench, but only for Dolphins celebration

Tua time? Even at 1-3, Dolphins' Flores says not so fast

Dolphins look improved from early 2019 but are still 0-2

QB Fitzpatrick was far from Dolphins' only problem in opener