Excavation work began Monday at two locations in a Tulsa cemetery for victims of a race massacre nearly 100 years ago that left hundreds dead and decimated an area that was once a cultural and economic mecca for African Americans.

Researchers took a core soil sample at one location to give them a better idea of what lies beneath the soil, said Oklahoma State Archeologist Kary Stackelbeck.

“That will help narrow the focus for the heavier machinery," Stackelbeck added. 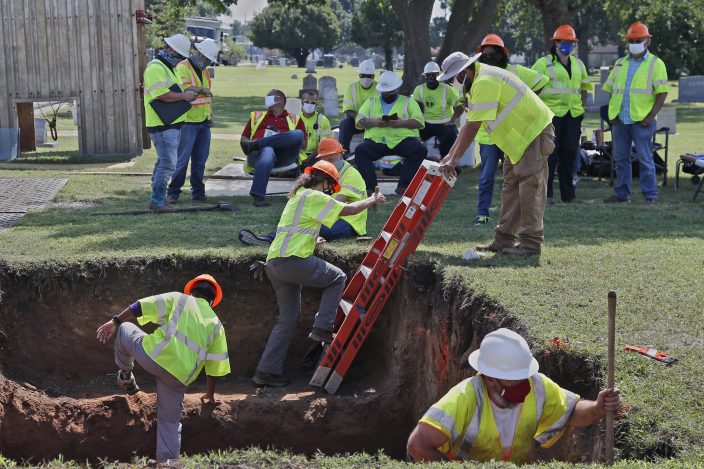 FILE - In this July 14, 2020, file photo, workers climb out of the excavation site as work continues on a potential unmarked mass grave from the 1921 Tulsa Race Massacre, at Oaklawn Cemetery in Tulsa, Okla. A second excavation begins Monday, Oct. 19, 2020, at a cemetery in an effort to find and identify victims of the 1921 Tulsa Race Massacre and shed light on violence that left hundreds dead and decimated an area that was once a cultural and economic mecca for African Americans. (AP PhotoSue Ogrocki File)

Both areas of interests are in Oaklawn Cemetery in north Tulsa, where a search for remains of victims ended without success in July, and near the Greenwood District where the massacre happened.

Stackelbeck noted that researchers have a “high level of confidence" some remains will be found in an area known as the Original 18, where old funeral home records indicate up to 18 Black people who were massacre victims were buried.

The latest search is expected to continue for the rest of the week, Stackelbeck said.

If bodies are discovered, researchers will try to determine if there are signs of trauma that could indicate they were massacre victims, said Phoebe Stubblefield, a forensic anthropologist at the University of Florida who is assisting in the search effort.

Attempts would also be made to identify the remains and any possible descendants, according to Stubblefield.

The violence took place on May 31 and June 1 in 1921, when a white mob attacked Tulsa’s Black Wall Street, killing an estimated 300 people and wounding 800 more while robbing and burning businesses, homes and churches.

The massacre — which happened two years after what is known as the “Red Summer,” when hundreds of African Americans died at the hands of white mobs in violence around the U.S. —- has been depicted in recent HBO shows “Watchmen” and “Lovecraft County.”

Search continues for remains from Tulsa massacre; none found

Search for Tulsa massacre victims resumes, no remains yet