The collective body language of Devin Bush's teammates said it all.

Moments after the Pittsburgh Steelers' second-year linebacker began writhing on the ground clutching his left knee after breaking up a pass in the second quarter against Cleveland on Sunday, the rest of the starting defense took a knee a few yards from him, quietly offering support for a player who has been every bit as good as advertised since being taken with the 10th overall pick in the 2019 draft.

Shortly thereafter, Bush limped his way back to the Pittsburgh sideline before eventually walking to the locker room, his No. 51 jersey fading from view indefinitely. 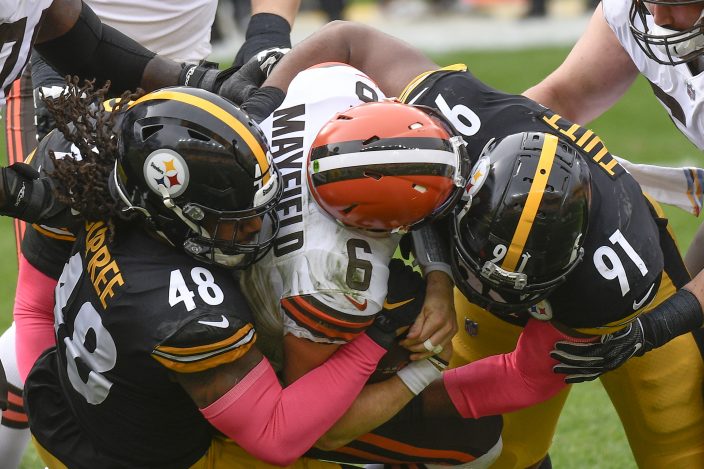 The image was one of the few true setbacks the Steelers have endured during their first 5-0 start in 42 years. How they respond to the loss of the defense's most indispensable player will go a long way to determining how far they climb in 2020.

“You’ve got to go into the process of next-man mentality,” cornerback Cam Sutton said Monday. "We have guys who are capable and ready to fill those spots and keep this thing rolling.”

Starting with Rob Spillane, who filled in capably during a 38-7 victory over Cleveland on Sunday. A special teamer by trade, Spillane had six tackles while playing 30 defensive snaps, nine more snaps than he'd seen in his brief three-year career. 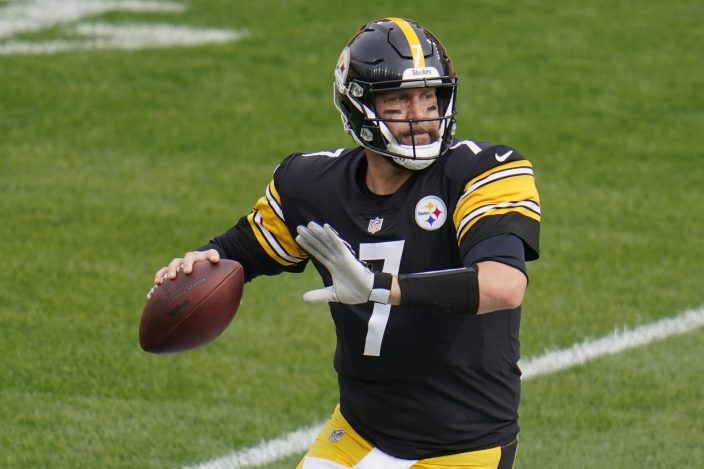 Pittsburgh Steelers quarterback Ben Roethlisberger (7) looks to pass against the Cleveland Browns in the first half of an NFL football game Sunday, Oct. 18, 2020, in Pittsburgh. (AP PhotoGene J. Puskar)

Spillane did it while wearing the green dot given to the player in charge of relaying the play call to the other 10 defenders on the field.

“Spillane more than answered the bell but we have a great deal of confidence in him,” coach Mike Tomlin said. “He’s a capable guy. Guys that make plays in special teams, that’s usually a precursor to them making plays in defense.”

Good thing, because the internal options — at least from an experience level — with Bush out are limited.

Pittsburgh cut veteran Mark Baron in a salary cap move during the offseason, leaving Bush and Vince Williams as the starters and Spillane, Ulysees Gilbert and Marcus Allen — a converted safety — as the backups, a trio that entered Sunday with nine defensive snaps combined in their careers, all of them by Spillane.

While Spillane lacks Bush's pedigree, the undrafted free agent signed off waivers from Tennessee in February 2019 doesn't necessarily have to do a Bush impression for the Steelers to keep rolling.

Considering the experience along both the defensive line and in the secondary, defensive coordinator Keith Butler is free to find creative ways to make up for Bush's absence on passing downs.

What the Steelers need Spillane or anybody else who lines up at inside linebacker to do is remain stout against the run. Pittsburgh faces Tennessee's Derrick Henry, Baltimore's Lamar Jackson, Mark Ingram and Gus Edwards and Cowboys star Ezekiel Elliott over the next three weeks.

Stuff the run and force opponents to pass — as the Steelers did so effectively against the Browns, who were held to 75 yards on the ground, 113 below their average coming in — and the NFL's best pass rush gets a chance to go to work.

Just about everything. A week after the Eagles were allowed to hang around for far too long by converting 10 straight third downs, Cleveland went 1 for 12 on third down and 0 for 3 on fourth down, all three coming in short-yardage situations.

“Part of being good in this league is identifying problems and eliminating them, hopefully before they happen but once they happen you have to eliminate them quickly,” Tomlin said. “We acknowledge that third down was an issue for us last week defensively. I thought they answered that challenge well and emphatically.”

Time to nit-pick. Pittsburgh's methodical 10-play drive to start the game ended with Chris Boswell's 35-yard field goal that gave the Steelers a lead they never flirted with relinquishing. Still, it also marked the 23rd straight game Pittsburgh failed to reach the end zone on its opening drive, the longest active streak in the NFL.

Wide receiver James Washington. With the Browns committed to slowing down JuJu Smith-Schuster and rookie Chase Claypool, Washington found himself in one-on-one coverage frequently. He responded with four receptions for 68 yards and a 28-yard score in which he sold a double move so effectively there wasn't a defender within 10 yards when he hauled the ball in.

The Steelers splurged in the offseason to bring in f ullback Derek Watt on a three-year, $9.75-million deal. When he's been healthy, Watt's impact has been largely minimal. He's been on the field for just 25 offensive snaps and considering how thin they are at inside linebacker, it appears the money might have been better spent elsewhere.

Center Maurkice Pouncey left with the game well in hand to give his aching foot a break. Versatile defensive back Mike Hilton left with a shoulder problem that doesn't appear to be overly serious.

149. The number of regular-season wins by Roethlisberger, fifth most by a quarterback in NFL history.

Finding a way to slow down the 6-foot-3, 247-pound Henry. The NFL's leading rusher is averaging 117.6 yards per game. The Steelers haven't allowed an opponent to go over 104 yards rushing in a game this season.