The Patriots did their best to prepare for their matchup with Denver while adjusting to an outbreak of COVID-19 cases in their locker room and the resulting lack of practice time that came as a result.

It manifested itself in a mistake-filled 18-12 loss in which they took away very few positives. But with a matchup with the 49ers and former quarterback Jimmy Garoppolo up next, it hasn’t affected their resolve to fix the offensive issues that have plagued them over the past two games.

“The urgency’s been up and it has to keep going up,” running back James White said. “Obviously we have to find a way to get in a rhythm, offensively especially, and just get it going.” 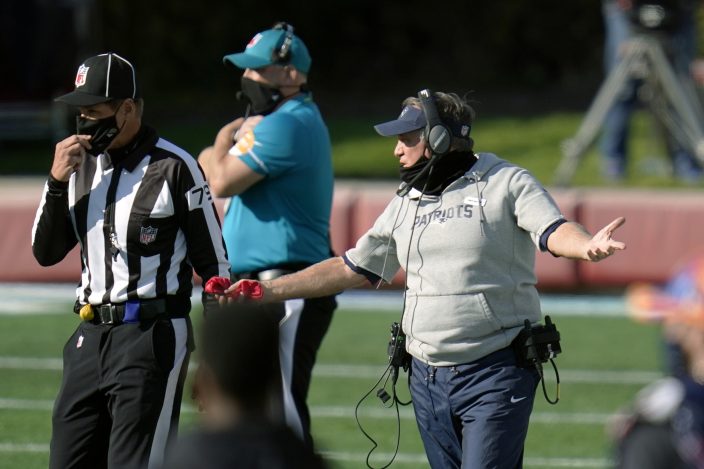 A good start would be doing a better job stringing drives together and giving its defense more time to rest. Denver held a five-minute advantage in time of possession.

Still, New England’s defense held the Broncos to six field goals and forced back-to-back turnovers in the fourth quarter to give its offense a chance to tie the game. But the Patriots managed only one touchdown on the day, turned over the ball three times and was limited to a season-low 288 yards.

It’s left them with a record below .500 through five games for the first time since 2001, Tom Brady's first year as a starter.

Quarterback Cam Newton said the hope is that most of their issues can be fixed by having a normal week of practice.

“We just cannot allow ourselves to just go through the motions and expect us being who we are is going to take care of itself, because that’s not the case,” he said “We’re not that good at that particular point yet and we need, obviously, practice, and hopefully everything else is halted from the COVID situation, which will allow us to do that.”

While he had his issues in the passing game, Newton picked up right where he left off running ball. He carried 10 times for a team-high 76 yards and had the lone TD. It was his second game this season with 70 or more yards rushing.

Injuries are continuing to cause disruptions on New England’s offensive line. The latest was to right tackle Jermaine Eluemunor, who didn’t return Sunday following an ankle injury late in the first quarter.

Mike Onwenu, who started at left guard, shifted to tackle, with Hjalte Froholdt taking Onwenu’s place at guard. It was the latest adjustment for the group, which was already playing without center David Andrews (IR, hand) and backup center James Ferentz (reserve/COVID-19 list).

Left guard Joe Thuney, who started at center Sunday for the second time this season, said they aren’t dwelling on the adjustments they’ve had to make.

“It always comes down to execution, you’ve got to execute on Sundays,” he said. “Regardless of positions, people, our whole room has that mentality of next man up and just got to execute better.”

Cornerback J.C. Jackson now leads the team with two interceptions on the season after picking off Drew Lock in the fourth quarter Sunday. The play helped set up a Nick Folk field goal that got the Patriots within a touchdown.

Receiver Julian Edelman had another rough outing, finishing with two catches for a season-low 8 yards. Since catching eight passes for a career-high 179 yards in Week 2 against the Seattle, Edelman has seven total receptions for 66 yards over the past three games. He has yet to catch a touchdown pass this season.

In addition to Eluemunor, defensive lineman Adam Butler also left in the second quarter with an elbow injury.

The Patriots could get back defensive tackle Byron Cowart off the reserve/COVID-19 list this week. But the most recent additions to that list — right guard Shaq Mason, defensive lineman Derek Rivers and running back Sony Michel (also currently on injured reserve) — will likely be out another game.

So expect New England to have much the same alignment on both the offensive and defensive lines against San Francisco.

The coronavirus outbreak that dela ...

Nissan pulls out of Trump emissions fight with Californ ...

Nissan said Friday that it will no ...

It's looking like a different kind of December for Patriots

Through ups and downs, Patriots still atop AFC East