Minnesota Vikings coach Mike Zimmer was assessing his team’s 40-23, Week 6 loss to the Atlanta Falcons with reporters on Monday when the coach stopped talking and paused for several seconds, seemingly done answering the latest question.

Zimmer then started back up, without being prompted by a question, to reflect more on how his team fell flat after making strides in previous weeks, including a one-point loss at Seattle the prior week.

“If we lost a game by one point and we had a letdown in the next game, that would be surprising to me,” Zimmer said. “If you lose a game, you shouldn’t have a letdown. You should put a foot on the grinder and get back to work.” 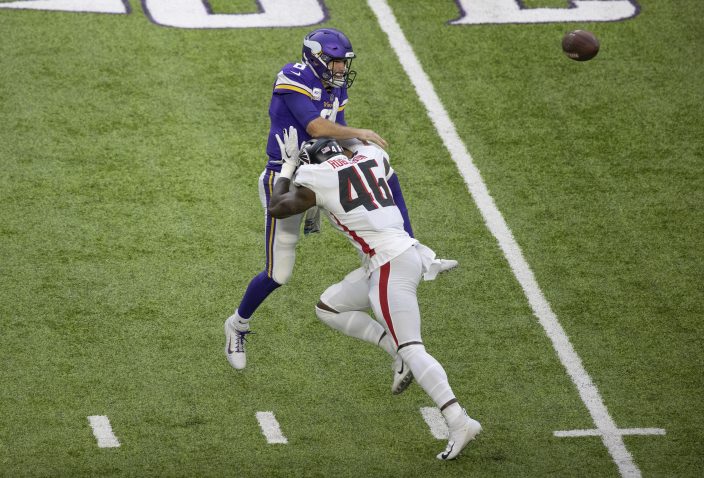 A day after describing the loss as “strange,” Zimmer seemed to still be searching for answers.

Minnesota (1-5) returned all the key pieces to its offense this season, aside from rookie Justin Jefferson replacing the traded Stefon Diggs. The Vikings believed they could rebuild a defense missing five starters from last season on the fly, in part because of Zimmer.

Reality has set in. 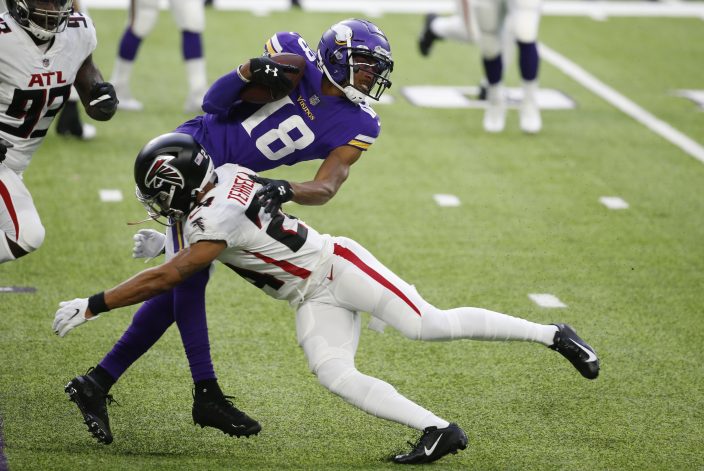 “When it’s time to win the game or time to win the series, we’re not very good,” Zimmer said of his defense. “And then offensively, it’s maintaining the football and controlling drives. I think we’re minus-7 in turnovers. All those things lead to bad football.”

Heading into the bye week, Zimmer said he will look at possible changes. At least for this season, there might not be many places for Minnesota to turn.

Quarterback Kirk Cousins signed a two-year, $66 million extension in March and holds a hefty cap $41 million cap hit next year that will give the Vikings pause. The options behind Cousins are veteran backup Sean Mannion, 2019 undrafted Jake Browning and Nate Stanley, a seventh-round rookie out of Iowa.

Many of the other 2020 draft picks are already playing after second-round offensive lineman Ezra Cleveland made his first career start on Sunday at right guard. Jefferson is an every-down player, as are cornerbacks Jeff Gladney and Cameron Dantzler, first- and third-round picks, respectively.

“Some of these young guys need a lot of work but some of them are playing every play,” Zimmer said when weighing how to handle the bye week of rest and instruction. “I’m kind of going through that a little bit now.”

Cousins is struggling, but the team’s pass catchers are thriving when given a chance to make plays.

Jefferson has been a quality replacement for Diggs with 28 catches for a team-high 537 yards. Adam Thielen has 32 receptions for 415 yards and seven touchdowns. Pro Football Focus rates Jefferson as the top wide receiver in the league, with Thielen fourth overall.

Minnesota could use more of a pass rush to help its young cornerbacks. The Vikings have 13 sacks in six games. Yannick Ngakoue leads the team with five sacks.

Falcons quarterback Matt Ryan had plenty of time on Sunday to throw to complete 30 of his 40 passes for 371 yards and four touchdowns. He was sacked twice for a total of 8 yards lost.

Jefferson had five total catches through the first two weeks of the season but has broken out recently. He had nine catches for 166 yards and two touchdowns in Sunday’s loss and has gone over 100 yards receiving in three of the past four games.

He joined Billy Howton of the Green Bay Packers in 1952 as the only players in NFL history with at least 500 receiving yards in their first five career games.

“The most impressive thing to me is the way he goes and gets the football,” Zimmer said of Jefferson. “He’s got extremely strong hands and catches the ball in traffic as well as anybody I’ve seen.”

Hard to look anywhere else but Cousins this week. Cousins threw an interception on the first play of the game and three in the first half on Sunday.

A year after throwing six interceptions in 15 games, Cousins leads the league with 10 picks this season.

7 - Minnesota owns a minus-7 in turnover differential. Only Dallas, playing Monday night, has a worse differential this season at minus-8.

The Vikings get a week to reset before going on the road to face the Green Bay Packers.