Cody Bellinger knocked his right shoulder out of whack with a celebration after his home run that sent the Los Angeles Dodgers to the World Series.

The reigning NL MVP said Monday he was “feeling pretty good” and manager Dave Roberts said he expects Bellinger to start in center field for Game 1 against the Tampa Bay Rays on Tuesday night.

Bellinger, who had already separated his shoulder multiple times, hurt it again with the emphatic celebration that followed his go-ahead homer in the seventh inning of Game 7 of the National League Championship Series, a 4-3 victory over the Atlanta Braves on Sunday night. He did a leaping high-five with Kiké Hernández, whose pinch-hit solo shot an inning earlier had tied the game. 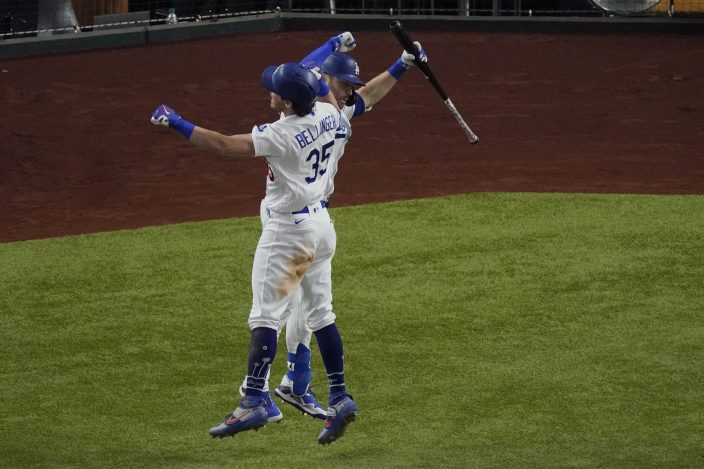 “It was an exciting time. It was pure adrenaline, kind of like a thing where you just black out,” Bellinger said. "I wish that I didn’t do it, but it was such a cool moment for me, and it was just pure excitement.”

Bellinger said the discomfort was similar to when he separated the shoulder on plays in the field in the past.

“It's maybe the third time I’ve done it, and it’s all the same,” he explained. “The next day it’s the same. I already expected what to feel and how I was going to feel, but I feel good right now.” 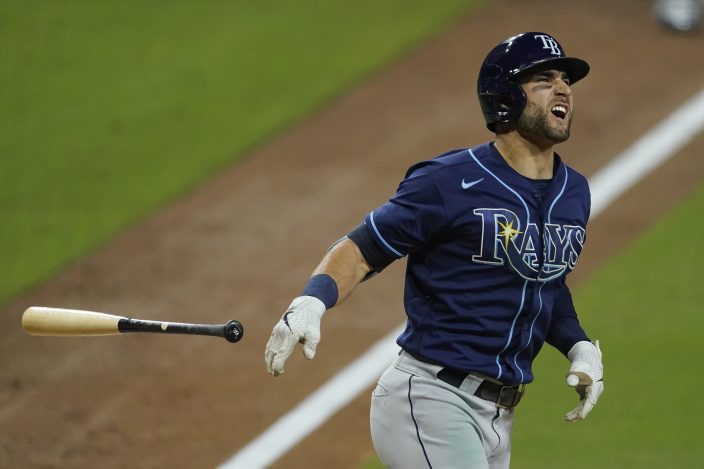 Tampa Bay Rays center fielder Kevin Kiermaier is still dealing with a sore left wrist a week after getting hit by a 99 mph fastball in Game 3 of the AL Championship Series against Houston.

The three-time Gold Glove-winning center fielder returned to the starting lineup in Game 7 on Saturday night.

“After that Game 7, a little sore yesterday and still tight in there. I got drilled, so it didn’t feel good by any means, but definitely good enough to go,” Kiermaier, the longest-tenured Rays player, said Monday before their workout. “I don’t think there’s any cause or concern moving forward. I hope not. I definitely have progressed as each day has gone by, so I hope that continues to keep going that way.”

The Rays have 2018 AL Cy Young winner Blake Snell set for Game 2, when Roberts could go with one of his rookies, Dustin May or Tony Gonsolin, while utilizing multiple pitchers. That could also be the plan for the Dodgers in Game 4.

Walker Buehler, who threw six scoreless innings in the Dodgers' 3-1 win in Game 6 of the NLCS, is set to start Game 3 of the World Series. The Rays hadn't announced a starter for that game Friday night, but Charlie Morton would be lined up on full rest. Morton won Game 7 of the ALCS on Saturday.

David Price is the missing man from the Dodgers' World Series roster.

Los Angeles acquired the left-hander from Boston on Feb. 10 along with star outfielder Mookie Betts for outfielder Alex Verdugo, minor league infielder Jeter Downs and minor league catcher/infielder Connor Wong. The Red Sox agreed to pay the Dodgers $48 million over three years, equal to half of what Price was owed for the remainder of the $217 million, seven-year contract he agreed to with Boston ahead of the 2016 season.

Price said July 5 he had decided to opt out of the pandemic-delayed season, concluding “it is in the best interest of my health and my family’s health for me to not play.”

Betts, also his teammate in Boston, said everybody in a Dodgers uniform wishes Price was with them in Texas.

“But we talk probably three or four times a week. He texts after games and says what he see and says when we do good. It’s not just me. I think he texts pretty much the whole team," Betts said Monday. "So that’s the kind of teammate he is and that’s what we’re missing in the clubhouse, that he brings to the clubhouse. It’s like he’s here, but he’s not.”

Roberts laughed when asked which team Price will be rooting for, and said it better be the Dodgers.

“I’ve been texting with David off and on this entire year and throughout the postseason," the Dodgers manager said. "We’re paying his checks, or most of his check. I saw him in spring training, so I hope he’s rooting for us.”

While the World Series is being played at a neutral site, the Dodgers do have a field advantage. They have played 13 games at the new $1.2 billion Globe Life Field this season.

The Rays got a feel for the stadium for the first time during a workout Monday night.

Los Angeles took two of of three in a series against the Texas Rangers in late August, and has played its last 10 games there. Los Angeles swept the San Diego Padres in three games in the NL Division Series before the seven-game NLCS over seven consecutive days last week.

The seven games during the AL Championship Series were decided by a total of 13 runs, matching Oakland’s victory over Cincinnati in the 1972 World Series, which featured six one-run games, and Washington’s win over the New York Giants in the 1924 World Series for the fewest in a seven-game Major League Baseball postseason series.

The World Series is being played close to Dallas, but not in the city Dallas — or even Dallas County.

Globe Life Field, home of the Texas Rangers, is located just off Interstate 30 in Arlington, a city of about 400,000 residents in Tarrant County that is about halfway between the downtown areas of Dallas and Fort Worth.

MATCHDAY: Southampton looks to keep up hot streak in EP ...

Debbie Williamson is used to the c ...