The Dodgers’ president of baseball operations since October 2014, he helped build Los Angeles into a power that reached the World Series for the third time in four seasons.

He had been Tampa Bay’s executive vice president of baseball operations since 2006, building a team that reached the World Series in 2008, overseeing the acquisition of Kevin Kiermaier, Blake Snell and Diego Castillo and a staff with many holdovers still in place. 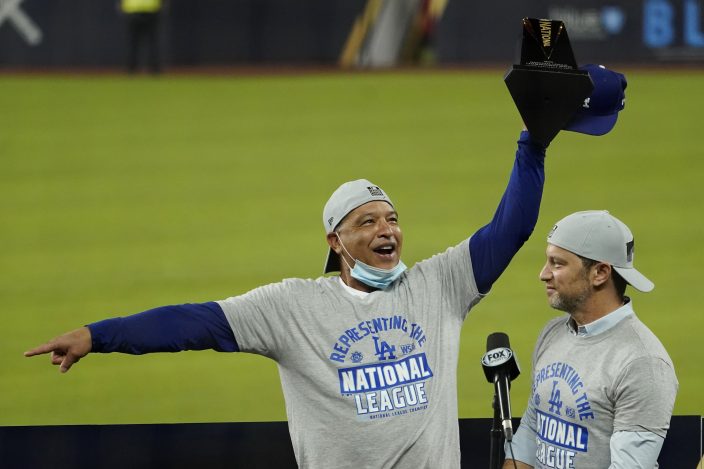 With the Dodgers, he oversaw the acquisition of Mookie Betts and Brusdar Graterol, the drafting of Walker Buehler and the signing of A.J. Pollock, Max Muncy and Blake Treinen.

"It kind of hit me today waking up and processing all the text messages and questions about it,” Friedman said Monday, a day before the Dodgers and Rays face each other in the World Series opener. “It’s definitely surreal. Some of my best friends in life are there. And we joked when I left the team that we were going to meet up in the World Series one day. And for it actually to happen is surreal.”

Erik Neander, promoted to Tampa Bay’s vice president of baseball operations when Friedman left, joined the Rays as an intern in January 2007 and learned from his boss. The Rays succeeded despite resources limited by an attendance perennially among the major leagues’ lowest.

They won their first pennant in 2008 with a $51 million payroll that was 28th in a season the Yankees topped spending at $222.5 million, according to Major League Baseball's figures, and won the AL Championship Series over Boston, second at $147 million.

Tampa Bay is 28th again in this pandemic-shortened season at $29 million, yet upset the Yankees ($83 million) and Houston ($81 million), earning a berth for the title against the top-spending Dodgers ($95.6 million).

His boyish face now slightly obscured by a short beard of gray and white, Friedman roots for the Rays from afar, watches a large amount of their games because of the time difference from California. But he does not feel split loyalties along the lines of Truffaldino Battochio, the title character of Carlo Goldoni’s “The Servant of Two Masters.”

“Payrolls don’t decide the standings, and I think we see evidence of that every year,” Friedman said. “Having a really deep and talented roster regardless of what your payroll is is the key to winning games, and that’s what they have. And it’s been through a lot of very shrewd moves, some through the draft, some through trades and all kinds of different creative ways of player procurement."

An outfielder who attended Tulane on a baseball scholarship, Friedman was graduated with a bachelor’s degree in management with a concentration in finance and went to work with Bear Stearns Cos. Inc. for two years followed by three years with MidMark Capital.

Friedman was hired by the Tampa Bay in 2004 at the behest of Stuart Sternberg, a retired Goldman Sachs managing director who bought the Rays, As Sternberg assumed operating control of the team in October 2005, he expanded Friedman’s role to general manager in practice, if not title, following the firing of Chuck LeMar.

Friedman valued versatile players with plate discipline and defensive abilities, and pitchers with flexibility to fill various roles. Culture established atop the team by Sternberg and in the baseball operations department by Friedman lives on with Neander and his staff.

“I hope we’re not too much of a surprise, but we’ve had some success here and feel like we’re where we should be,” Neander said. “We spend a lot of time trying to make sure we talk about activating our work force, making sure that the people that we have working here develop enough comfort and a feeling of security that they’ll speak up, that they’ll share their thoughts, that they’ll be willing to put themselves out there without fear of the consequences of being wrong or being off the mark. And I think from a cultural standpoint, giving them a place especially in sports where it’s so cutthroat, there’s so much turnover, that only lends itself to people not speaking up and sometimes they feel the best way to advance is they say nothing.”

Friedman remains tied to the people he left behind.

“I think just kind of growing up in the game with the people that I did working with the Rays, we all started together and went to each other’s weddings and were there when our kids were born,” he said. “It was a just amazing chapter of my life. And the success that we were able to have, especially in the division that we played in, was incredibly rewarding. And I’ll always think back on those times with the fondest memories.”

For all the use of analytics, Friedman concluded people management is the key. He learned that from Sternberg.

“At the core of what we do know, we’re involved with trying to provide the best environment and culture for people to thrive,” Friedman said. “And I don’t think that’s different in any business. And it was something that was really important to us when I was with the Rays. And it’s something it’s really important to us now. I think when guys are more comfortable, they perform better. And I think that stems from having honest conversations with people and just the consistency of message and everyone really being on the same page. And it doesn’t mean that we don’t disagree, but I think culture is incredibly important to organizational success.”

And now he gets to match wits against his former staff for baseball's top prize.

"It’s going to be really fun competing against them,” he said.

Despite the absence of its coach a ...