The British government has given the city of Manchester a noon Tuesday deadline to agree to tighter coronavirus measures, as Prime Minister Boris Johnson struggles to impose his plan for localized restrictions on restive regions.

Johnson’s government is resisting a recommendation from its scientific advisors to have a short “circuit-breaker” lockdown to curb the spread of coronavirus.

Instead it has adopted a three-tier system for England, with areas classed as medium, high or very high virus risk. In the top tier, pubs have to close and people are barred from mixing with members of other households. 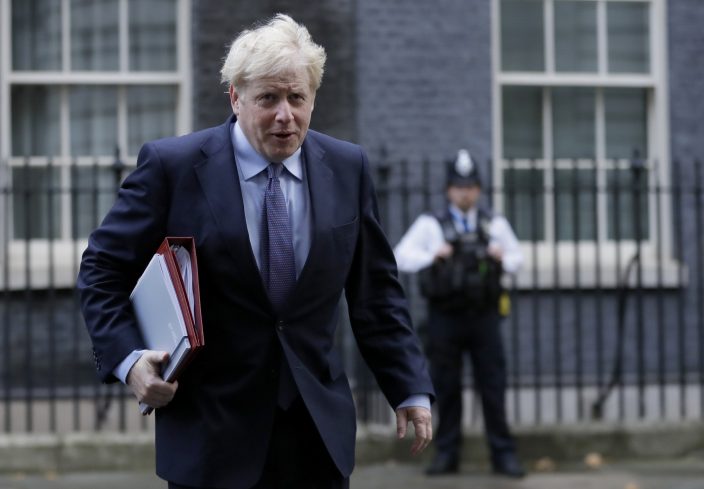 So far only the Liverpool and Lancashire regions of northwest England have been placed in Tier 3, the highest level. Nearby Greater Manchester, with a population of almost 3 million, has been holding out for more support for workers and businesses affected by the restrictions.

“We’re trying to respond to a pandemic on the cheap, that’s how it feels," said Greater Manchester Mayor Andy Burnham.

Burnham said if Johnson's Conservative government imposed the measures on the city, “we would obviously have to accept that decision, in the end it’s the government’s prerogative." 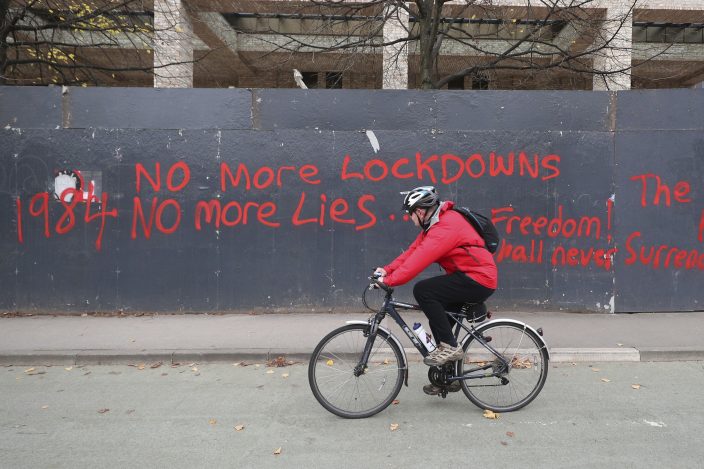 A man cycles past anti-lockdown graffiti in Manchester, England, Monday, Oct. 19, 2020 as the row over Greater Manchester region's coronavirus status continues. Britain’s government says discussions about implementing stricter restrictions in Greater Manchester must be completed Monday because the public health threat caused by rising COVID-19 infections is serious and getting worse. (Peter ByrnePA via AP)

"But I would say to them at this point are they sure that that is a wise thing to do?” he told Sky News.

Authorities across the U.K. are imposing new restrictions on business and social interactions as COVID-19 infections rise throughout all age groups, filling hospital beds and intensive care wards. Britain has Europe's deadliest coronavirus outbreak, with more than 43,800 confirmed deaths.

Under the U.K.’s system of devolved government, the regional administrations in Northern Ireland, Scotland and Wales control health policy in their areas and the U.K. government makes the rules for England.

In Scotland, pubs and other leisure facilities are closed and sports and live events are banned in the biggest cities of Glasgow and Edinburgh, with slightly less stringent restrictions elsewhere.

Northern Ireland has closed schools for two weeks, banned most social gatherings and shut down many businesses including bars and restaurants for a month.

Wales has gone the furthest, announcing a two-week “firebreak” lockdown starting Friday that will close all non-essential businesses and ban most trips outside the home.

Welsh First Minister Mark Drakeford said he was opting for a short, sharp shock over a longer period of less stringent restrictions.

“The advice to us -- partly because of the impact on people’s mental health -- was that if you could keep this period of time as short as you could, that would help to mitigate that impact,” Drakeford told the BBC.