The European Union on Tuesday will pledge 43.6 million euros ($51.5 million) to help meet emergency aid and food needs to three countries in Africa’s Sahel region, as the United Nations sought to raise $1 billion to tackle a humanitarian crisis there.

The offer came as part of a virtual ministerial meeting -- hosted by Denmark, Germany, the European Union and the United Nations -- aimed at spotlighting one of the world’s fastest growing humanitarian crises in a region plagued by increasing conflict, weak governance, and a lack of development.

“The EU’s pledge consists of 23.6 million euro in funding for humanitarian actions in Burkino Faso, Mali and Niger, and 20 million euro in development funding to address the food crisis afflicting the central Sahel region,” European Commission spokesman Balazs Ujvari said. He said the EU has already “mobilized” 8 billion euros for the region since 2014. 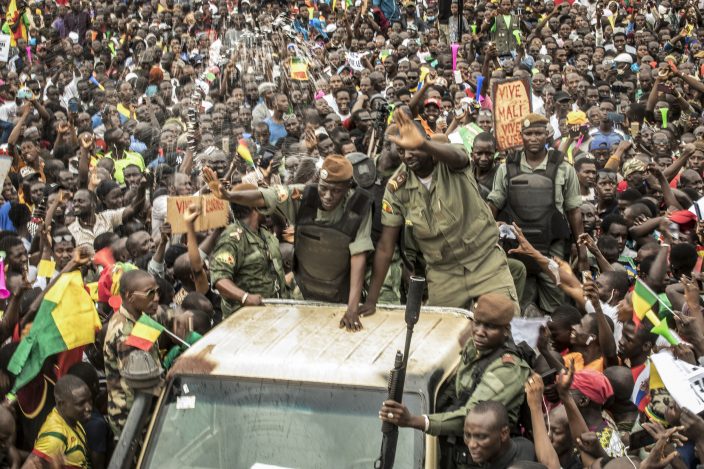 File-This Aug. 21, 2020, file photo shows an unidentified representative of the junta waves from a military vehicle as Malians supporting the recent overthrow of President Ibrahim Boubacar Keita gathers to celebrate in the capital Bamako, Mali. The U.N. humanitarian chief, Mark Lowcock, is hoping a major ministerial meeting on Tuesday, Oct. 20, 2020, will not only raise a billion dollars for the three countries at the epicenter of a humanitarian crisis in Africa’s Sahel region -- Burkina Faso, Mali, and Niger -- but spur leaders to address the underlying drivers including increasing conflict and insecurity, weak governance, and a lack of development (AP PhotoFile)

The U.N. humanitarian chief told the Associated Press before the meeting that the troubling situation in Burkina Faso, Mali and Niger is a symptom of failure to deal with a broad range of political, security and development challenges, as well as rapid population growth and climate change.

Mark Lowcock said the result is that a record 13 million people need humanitarian assistance across the border areas of Burkina Faso, Mali and Niger. He said most of them are children.