A NASA spacecraft descended Tuesday toward the surface of an asteroid 200 million miles away to collect a handful of rubble for return to Earth.

The Osiris-Rex spacecraft dropped out of orbit around asteroid Bennu right on time, beginning a 4 1/2-hour plunge to the rough, boulder-covered face of the ancient space rock.

It was America's first attempt to gather samples from an asteroid, something already accomplished by Japan — twice. 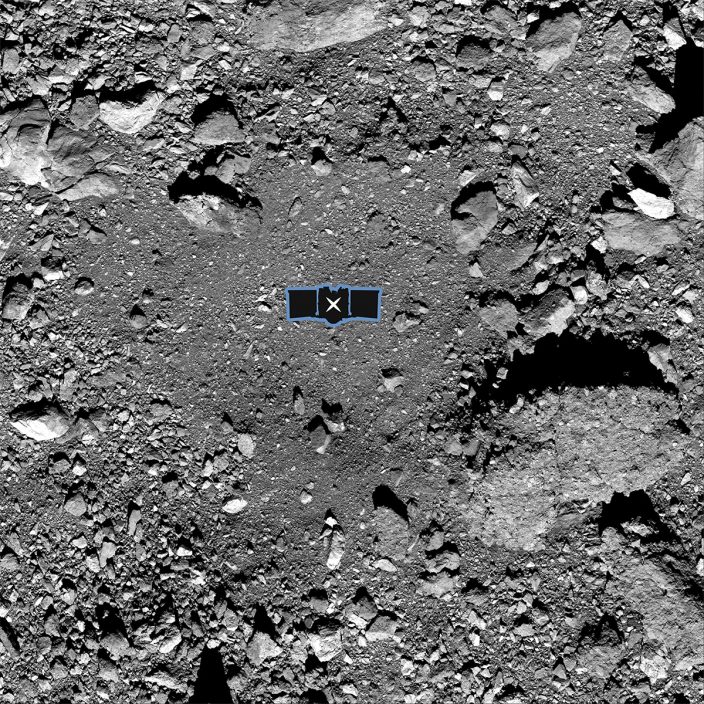 This undated image made available by NASA shows the OSIRIS-REx spacecraft's primary sample collection site, named "Nightingale," on the asteroid Bennu. An outline of the OSIRIS-REx spacecraft is placed at center to illustrate the scale of the site. After almost two years circling the ancient asteroid, OSIRIS-REx will attempt to descend to the treacherous, boulder-packed surface and snatch a handful of rubble on Tuesday, Oct. 20, 2020. (NASAGoddardUniversity of Arizona via AP)

Bennu’s gravity was too low for the spacecraft to land — the asteroid is just 1,670 feet (510 meters) across. As a result, Osiris-Rex has to reach out with its 11-foot (3.4-meter) robot arm while dodging boulders the size of buildings, and attempt to grab at least 2 ounces (60 grams) of Bennu.

It promised to be the most harrowing part of the mission, which began with a launch from Cape Canaveral back in 2016.

"We’ll only be kissing the surface with a short touch-and-go measured in just seconds,” said the University of Arizona's Heather Enos, the deputy scientist for the mission. 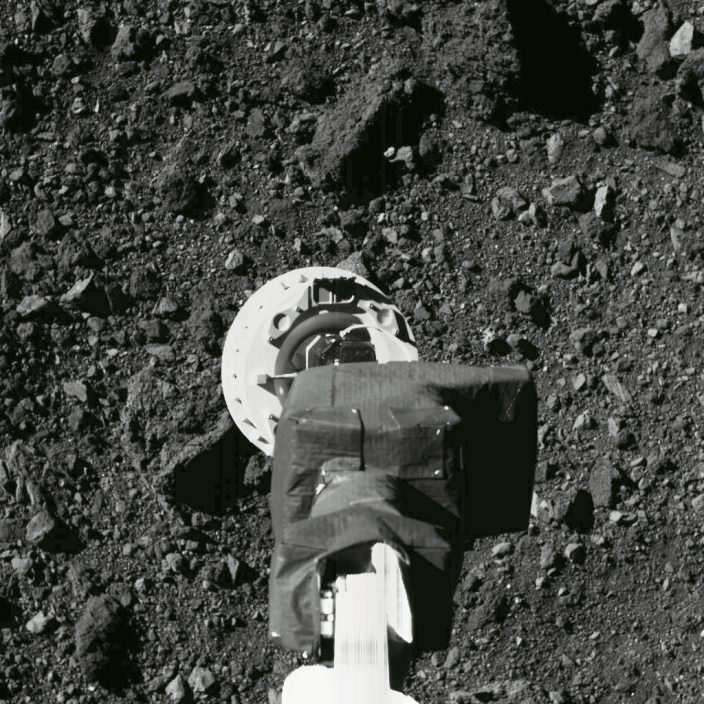 This Aug. 11, 2020 photo shows the sampling arm of the OSIRIS-REx spacecraft during a rehearsal for an approach to the "Nightingale" sample site on the surface of the asteroid Bennu. After almost two years circling the ancient asteroid, OSIRIS-REx will attempt to descend to the treacherous, boulder-packed surface and snatch a handful of rubble on Tuesday, Oct. 20, 2020. (NASAGoddardUniversity of Arizona via AP)

A van-sized spacecraft with an Egyptian-inspired name, Osiris-Rex aimed for a spot equivalent to a few parking spaces on Earth in the middle of the asteroid's Nightingale Crater. After nearly two years orbiting Bennu, the spacecraft found this location to have the biggest patch of particles small enough to be swallowed up.

The plan called for Osiris-Rex to shoot out pressurized nitrogen gas to stir up the surface, then suck up any loose pebbles or dust. Contact was expected to last a mere 5 seconds to 10 seconds, with the spacecraft quickly backing away.

NASA won’t know until later this week how much was actually collected — or whether the spacecraft got anything at all.

Unlike the exceptionally fast Mars descents — described by NASA as seven minutes of terror — “this is much more of 4 1/2 hours of mild anxiousness,” Enos said on the eve of the big grab. “We have practiced and rehearsed with the spacecraft ... so we’ve seen almost all of this already. ”

Osiris-Rex got as low as 130 feet (40 meters) during the final dry run in August.

By the time flight controllers near Denver hear back from Osiris-Rex, the action already will have happened 18 1/2 minutes earlier, the time it takes radio signals to travel each way between Bennu and Earth.

Scientists want to get between 2 ounces (60 grams) and 4 pounds (2 kilogram) of Bennu's black, carbon-rich material — thought to contain the building blocks of our solar system.

NASA's science mission chief, Thomas Zurbuchen, likened Bennu to the Rosetta Stone: "something that's out there and tells the history of our entire Earth, of the solar system, during the last billions of years.”

Osiris-Rex can make up to three touch-and-go maneuvers in case it comes up short. Regardless of how many tries it takes, the samples won't return to Earth until 2023 to close out the $800-plus million quest. The sample capsule will parachute into the Utah desert.

“That will be another big day for us. But this is absolutely the major event of the mission right now,” NASA scientist Lucy Lim said Tuesday.